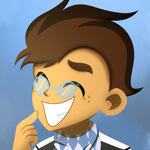 Hello, sir Imperfect! I'd like to ask you about how valid HD remakes of low quality title cards (and other text) from international versions of the show would be for posting in My Little Pony Friendship is Magic/International edits/Gallery.

If you have higher quality versions of already present images, by all means upload them. If there's already a version of a certain image on the page, you can replace it with "Upload a new version of this file" on the file page.

What I do mean is that, I remade this (and a few other texts) in Photoshop. Bragging aside, even if it is a very good remake, it's still not from an official source (like GamerBoi's 720p german text, from the blu-ray DVDs), so one has to wonder how eligible they are for posting. Ha³ (talk) 20:52, April 29, 2015 (UTC)

Oh, I see. Then no, I'm afraid they wouldn't be eligible for Wiki use. If an image is altered or otherwise unofficial, it counts as fan-made. (An excellent recreation though.)

Hex color and something.

Hey Imperfect, i was just wondering that if you got time, then could you give me the correct "Hex color" to this color?

And if i can ask for some wording and grammar help as usual, then could you tell me which of the 2 words you think is the correct or most suitable one to use in the case of the example sentences below, just so i can understand this a bit better?

1: "She has a brother who seeks to become a detective and works for the police.

[Some time later/At one point], her brother managed to track down a criminal and found some stolen lot."

2: "With her new car, she decides to use it to drive to the city. [Some time later/At one point], she finds a cheap apartment in the city and decides to buy it."

Ok, thanks for your help as always. :)

Hey Imperfect, so if i can ask, should the words "to which" or the word "and" be used in the case of a sentence like the one below, just wanna know which is the correct/better grammar?

"Her opponent asks after her identity, [to which/and] she introduces himself."

"And." Not to sound insensitive, but these are very simple grammar questions you're asking, which a casual search on Google can answer.

Hm, I guess not. Capitalizing it such was more out of proper noun habit than anything. :P

Wouldn't that be the case with the original example too then?

So yeah, I marathoned Gravity Falls. It's a pretty good show, man. It's way too smart for Disney Channel, that's for sure. Anyway, the most recent episode was just...wow...Never has a show on the Disney Channel gotten me so intrigued and involved. The reveal at the end sort of broke me...It's truly an amazing show...  UnknownProdigy

Why you deleted my edit? —Preceding unsigned comment added by Laurahanssens (talk • contribs)

I explained why in my edit summary: the information inserted was already on the page and was badly formatted.

Hm, everytime if i edit something it's getting changed.. :( how comes?

Hey there. Not sure if this is the right place for this (so apologies in advance if it isn't), but I noticed when undoing the edit I made to Scootaloo's page, you said "Alleged?"

Spoilers should be expected, that's right...

...but regarding the wiki's topic, not random stuff. Like Agatha Christie's novels.

Because (1) the List of allusions page alludes to multiple other media, not just Agatha Christie's work, so there really isn't any room to make exceptions; and (2) the work in question has been in circulation since the 1930s. Yes, it's up to the individual whether or not to read during that time, but again, exceptions can't be made for the individual.

I am sorry that I cannot respond to this, as the abuse filter unjustly blocks my response as "common vandalism". Could you please tell me how may I contact you? Thanks in advance, Marcgal (talk) 19:58, May 5, 2015 (UTC)

You're contacting me through the best possible method right now. If you have questions to ask me, my talk page is the best way to do it.

Retrieved from the abuse filter (with one change made):

For sure it would be worthy to call the removal of the spoiler an unjust exception. But I see no harm in hiding it, so that anyone interested can unhind and read it. Also, there's a big difference between just noting the allusion to other work and spoiling it's ending. I read the allusions page to learn about other worthy works, so I can read/watch them later... I propose to spoiler-mark (a) every major spoiler of any other work and (b) spoilers regarding later episodes on pages about earlier episodes. I think this would make a sound general rule rather than complaining about just that one sentence (witch obviously is of no interest to me any more).Marcgal (talk) 12:57, May 5, 2015 (UTC)

That sort of thing should probably be proposed in the forum. For what it's worth, I'm opposed to that idea, especially part (b), since the wiki makes it clear on the front page that there are spoilers for the entire Friendship is Magic franchise across the wiki (and not just the show, but the comics, the chapter books, etc).--

Help over on Equestria Girls Wiki with galleries

The page you linked states that there were legal issues with both "Twilight" and "Twilight Twinkle" -- which is exactly what I stated in my edit summary. Your edit claimed Twilight Twinkle had no such legal issues -- so who's the one who really needs to check their facts? ;)

I had no idea that Twilight Twinkle was copyrighted. Sorry about that. Can I still add the plain old Twilight thing and also say twinkle was also copyrighted? TmanFate (talk) 03:13, May 7, 2015 (UTC)

About some changes and reply. :l

Ok, so to reply to this message.

Sorry for that Imperfect, but to be completely honest and if i can just tell you my opinion on all this, then i think it seemed unneccessary removing and change some of the stuff already on Sunset`s page, as most of the stuff on it were already good as they used to be and not really any "incorrect" information. Besides, some of those changes on Sunset`s page are a little confusing and i dont quite understand why it was better replacing and removing some of the stuff on it like you did when they have been ok staying on that page for so long. :l

I understand your explaination "These were removed to cut redundancy and subjective wording" and the "The current orientation on Sunset's page is fine as it is...", but i honestly dont quite agree, as not everything seemed "redundant" and already were fine, not grammatically incorrect, and didnt excatly mean that much different from what you have been writing now:

1: Well to start, then i dont understand why you removed the words "Egotistical" and "cruel" (even if you might not like to use "cruel", then its not incorrect) and replaced them with just "self-absorbed", she was clearly cruel toward others in the film and egotistical was already a suitable word to use to describe her arrogant personality side better, so i dont see why you had to remove/replace it like that? To not forget, replacing "fierce" with "ruthless" in her personality, both kinda already means the same and the latter was/sounded a bit more suitable instead, as she did try to hurt Twilight.

Also removing the "She is also shown to be mainly concerned with gaining power and princesshood, desperately trying various attempts to get Twilight Sparkle's crown in order to use its magic.", well that part i think was kinda unneccessary of you to do, as it is nothing wrong or redundant with it.

2: The "Personality" sections on Flash and Sunset`s pages do look somewhat better placed over those 2 sections over it instead of below, as Flash and Sunset`s personality description as really nothing to do with any of the stuff in the "Hasbro online descriptions" and "Merchandise" sections but just the stuff in the other sections, so whats the point letting it be placed below those and why is it a problem letting them not be now (as i tried to just simply move Sunset`s personality section back to where it was placed before, only for you to revert/undo it)?

Besides, then the majority of the pages on this wikia have their "Personality" sections placed over the "Mercandise" and some other sections (as those have really nothing to do with the personality of the character, unlike the "Depiction in the series/films" sections), so why should Flash and Sunset`s pages be the only exceptions?

I really apologize if it sounds like i am "complaning" or anything, i dont mean to do so and as one of the Admins here you know what you are doing, I only try to be honest and explain the reasons i did those last edits on that page and why i think at last some (not all) of the previous edits that were removed should probably be re-added.

As said I am a bit confused about all this, as most of the info on that page were not anything wrong and did not really seem neccessary to be changed and removed, and each time time i tried to just add some few of those edits back, you undid for some reason. :l

So overall, I only would like to know why you think all of those changes you did on that page are/were neccessary/better and why excatly the stuff you removed or changed on it were "redundant", despite the 3 points i told you above and etc, so i can truly understand all of this?

Retrieved from "https://mlp.fandom.com/wiki/User_talk:ImperfectXIII?oldid=1418900"
Community content is available under CC-BY-SA unless otherwise noted.