ロイヤル・ウェディング パート2 (原題: A Canterlot Wedding Part 2) は、第2シーズン第26話(52話)のエピソードで、ロイヤル・ウェディング パート1の後編に当たるお話しです。 Twilight Sparkle grapples with her conflicted feelings when she finds out her brother, Shining Armor, is marrying Princess Celestia's niece, Princess Cadance. Twilight also begins to suspect that Cadance has changed since their childhood.

Spike delivers a letter from Princess Celestia to Twilight Sparkle, Fluttershy, Rainbow Dash, Rarity, Pinkie Pie, and Applejack. In the letter, Princess Celestia asks Twilight and her friends to help with the upcoming royal wedding in Canterlot. Applejack will provide catering for the reception, Pinkie Pie will host it, Fluttershy will train and conduct the bird choir, Rainbow Dash will perform a sonic rainboom during the ceremony, and Rarity will design the wedding dresses. Twilight receives the keystone job of overseeing the preparations.

Twilight is shocked to learn that the bride and groom are "Princess Mi Amore Cadenza" and Twilight's brother, Shining Armor. Twilight is upset because he never told her about his wedding or Princess Mi Amore Cadenza. In a song called B.B.B.F.F. ("Big Brother Best Friend Forever"), Twilight recalls how she and Shining Armor used to do everything together, and how much she misses him.

On the train ride to Canterlot, everyone except Twilight happily discusses the wedding, and only Applejack notices Twilight's glumness. Upon inquiry, Twilight says that she is still thinking about Shining Armor's neglect of her, though Applejack tells her not to worry.

At Canterlot, it is evident that there has been an increase in security: the train passes through a pink protective sphere encasing the city, there are many guards at the station, and Princess Celestia keeps watch with the aid of a telescope from the balcony of the highest tower. Shining Armor is happy to see his sister and affectionately calls her "Twily.” Twilight immediately berates him for not telling her about the wedding, but Shining Armor explains that he had no choice and Princess Celestia wanted an increase in security in response to an exterior threat. Twilight concedes but remains hurt. Shining Armor reassures her that she has always been, and always will be, important to him, and asks her to be his Best Mare.

Shining Armor explains that Princess Mi Amore Cadenza is the full name of Cadance, Twilight's former foalsitter. Twilight proclaims her to be "beautiful, caring, and kind" and "the best foalsitter ever.” A flashback shows that filly Twilight and Cadance used to frolic in the park, play on the swings, and resolve lovers' quarrels. Twilight remembers their chant:

"Sunshine, sunshine, ladybugs awake! Clap your hooves and do a little shake!"

Twilight sees Cadance and eagerly reminds her of their chant. However, Cadance fails to recognize it and proves indifferent to Twilight. Shining Armor announces that Cadance will be monitoring the wedding planning. When he says that they are happy to have Twilight there, Cadance smiles at Twilight malevolently.

Twilight begins overseeing the wedding preparations, starting in Applejack's kitchen. When Cadance shows up to check the catering, Applejack offers her an apple fritter, which Cadance insincerely calls "delicious.” Applejack gives Cadance a bag of fritters in case she forgets to stop for a meal, but when Applejack turns around, Cadance tosses the fritters into the trash.

Twilight, incensed by Cadance's ingratitude, visits Rarity, who is working in the tower room she stayed at in Sweet and Elite. Twilight begins to describe Cadance's temperamental behavior, but Cadance arrives with her bridesmaids, (Lyra Heartstrings, Minuette, and Twinkleshine). Cadance ignores Rarity’s greeting and appraises her dress. She says that she was hoping for more beading and a longer train, and turns her attention to the bridesmaids' dresses. Displeased, she demands that Rarity make them in a different color, despite the fact that her bridesmaids love their dresses. Rarity is more than happy to comply with the royal demands, but Twilight calls Cadance "Princess Demandypants" when Cadance is out of earshot.

After nightfall, Cadance meets Pinkie Pie inside the castle ballroom. Pinkie presents her flamboyant reception plans, which include a board game, carnival music, and dancing. Cadance compares the setup to a "party for a six-year old,” although Pinkie Pie is oblivious to the insult. Meanwhile, Twilight has been eavesdropping on their exchange.

Princess Luna enters the shield and switches places with Princess Celestia on the tower balcony for the night. Meanwhile, the six friends and Spike are sipping drinks after a day of work. Twilight seizes the opportunity to find fault with Cadance, calling her the "absolute worst bride-to-be ever.” However, her friends rationalize Cadance's behavior. Fluttershy mentions that Cadance criticized one of the choir birds during rehearsal, but the bird in question was off-key. The friends suggest that Twilight is still being excessively protective of her brother, but Twilight insists that her friends are too preoccupied with wedding preparations to notice Cadance's attitude. Frustrated, she storms off.

Twilight visits her brother's house and tries to talk to him privately, but is interrupted by Cadance, who is also intent on speaking with him. Twilight watches Cadance scold Shining Armor about a crest he is planning to wear with his dress uniform, which belonged to his favorite uncle. Shining Armor protests and Cadance swiftly casts a spell on him, making him to go wall-eyed. Frightened, Twilight runs away. Shining Armor sees Twilight running off and wonders what she wanted to tell him.

Attempting to warn everyone

Twilight runs to the castle to where her friends are staying. Her friends explain that Cadance has chosen them to be her new bridesmaids, and they interpret it as a reward for their diligence and evidence of Cadance’s good intentions. Nobody knows where the former bridesmaids are or listens to Twilight's warning. Twilight leaves, saying, "Looks like I really am on my own."

The wedding rehearsal takes place the next day, but Twilight is not there. When Shining Armor turns to take his wedding ring, Twilight bursts into the wedding hall, proclaiming that neither she nor Shining Armor should stand next to Cadance. Ignoring the inquiries of Fluttershy and Applejack, she approaches the podium and points at Cadance, crying, "She's EVIL!" While aggressively cornering Cadance, Twilight condemns Cadance's behavior towards her friends, the sudden disappearance of the bridesmaids, and the spell she cast on Shining Armor.

Cadance, bewildered by Twilight's accusations, runs away in tears. Twilight chases her out and proudly trots back into the hall. However, Shining Armor contradicts each of Twilight’s accusations. He claims that Cadance's magic was intended to alleviate his migraines, which were caused by 24/7 maintenance of the protective magic barrier; Cadance replaced her bridesmaids because of their apparently shallow motivations; and her brusque behavior towards Twilight's friends appeared to be due to the stress of having to make all of the decisions for the wedding in her groom’s absence defending Canterlot.

Shining Armor contrasts Cadance's efforts with Twilight's apparent lack of concern for the wedding. He dismisses Twilight from her position as Best Mare and suggests that she not attend the wedding at all. Her friends and Princess Celestia also leave to check on Cadance. Twilight is left in the wedding hall alone, where she laments the loss of a brother and a potential sister. She begins to doubt her opinion of Cadance.

When Twilight is still in the hall, Cadance appears and comforts her, stroking her mane affectionately. When Twilight apologizes, Cadance's eyes turn green, and she says that Twilight will be sorry. Cadance summons a ring of green fire, which engulfs Twilight in a sphere of energy. Cadance walks out of the room as the sphere and Twilight sink into the ground.

Twilight Sparkle: [reading letter] Rarity, you will be responsible for designing the dresses for the bride and her bridesmaids.
Rarity: Princess Celestia wants me to— [breaks down into gibberish] ...wedding dress? For a Canterlot wedding... I, ah, ooh, oooh!
[thump]

Applejack: Your brother's getting married? Congratulations, Twilight, that's great news!
Twilight Sparkle: Yeah, great news. That I just got from a wedding invitation! Not from my brother, but from a piece of paper! Thanks a lot, Shining Armor. I mean, really, he couldn't tell me personally? [puppetering a sandwich as Shining Armor] Hey, Twilight, just thought you should know I'm making a really big decision that changes everything. Oh, nevermind, you'll hear about it when you get the invitation. [normal] Princess Mi Amore Cadenza? Who in the hoof is that?! [snorts]

Spike: So you all get to help with the big fancy wedding, but I'm the one who gets to host the bachelor party! I have just one question. What's a bachelor party?
Main cast (except Twilight Sparkle): [laughing]

Spike: [deep voice] I do. Do you? [high voice] I do! [kissing noises] [laughs nervously]

Pinkie Pie: Okay, let me see. We've been over the games... [rattles dice] ...the dances...
[polka from Swarm of the Century plays]
Pinkie Pie: I think this reception is gonna be perfect! Don't you?
Princess Cadance: Perfect! ...if we were celebrating a six-year-old's birthday party.
Pinkie Pie: [gasps] Thank you!

Princess Celestia: Perfect, girls, no need to rush. Then, of course, Cadance will enter. I'll say a few words and then we will begin with the vows.

Twilight Sparkle: Maybe I was being overprotective. I could've gained a sister. But instead... I just lost a brother. 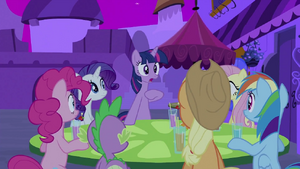