2, 4, 6, Greaaat, incorrectly[1] titled 2,4,5 Greaaat by some sources, is the fifteenth episode of season nine of My Little Pony Friendship is Magic and the show's two hundred and eleventh episode overall.[2] The title is a wordplay on "2, 4, 6, 8", which is a common chant used in cheerleading.

In this episode, the School of Friendship starts a buckball team, and Rainbow Dash has to come to terms with the fact that she won't be coaching the team.

The scene when Rainbow Dash congratulates her cheer squad reappears and gets praises from Princess Celestia in Deep Tissue Memories.

The episode begins with Twilight Sparkle informing Pinkie Pie, Fluttershy, and Snails that Princess Celestia has started a scholastic buckball league and that she wants the first league game to be between her School for Gifted Unicorns and Twilight's School of Friendship. Twilight explains to her friends further that they, as professional buckball players, will coach the school's team. An overeager Rainbow Dash arrives to help coach the team as well, but Twilight tasks her with coaching the cheerleading squad instead.

Rainbow Dash is adamantly against her task and questions the importance of cheerleading, but Twilight is certain she is perfect for the job. Assistant coach Snips is even more certain of Twilight's decision, having realized how profitable selling buckball merchandise can be after visiting the Buckball Hall of Fame in Appleloosa.

The squad looks to Rainbow Dash for guidance and improvement, but Rainbow shows very little interest in being a cheerleading coach, as she would rather coach an actual team. When she leaves, Snips catches up with her and tries to convince her to coach the squad properly—mainly so he can make a profit from selling buckball souvenirs. However, Rainbow still refuses to coach, dismissing cheerleading in sports as unimportant, and tells Snips to coach the squad himself.

Back on the field, Rainbow Dash observes Snails' bizarre coaching practice with the buckball team. When the cheer squad appears after a failed practice session with Snips, Smolder tells Rainbow to do what Twilight told her to do, but Rainbow continues to shirk responsibility and have others coach the squad for her. Snails, in a rare moment of wisdom, advises Rainbow Dash to look to her friends for help, and Rainbow begrudgingly acquiesces.

Who cares about cheering?

Following Snails' advice, Rainbow Dash goes to her friends for help in coaching the cheer squad. Pinkie Pie provides a party cannon, Rarity provides brand-new cheerleading uniforms, Applejack and Big McIntosh provide bales of hay, and Rainbow herself brings a rhyming dictionary from the school library. She tries again to leave, but the squad tells her that Fluttershy and Pinkie want them to debut their new cheer routine the next day in order to get the team excited for the upcoming game. However, Rainbow tells the squad to figure things out for themselves.

The next day, Rainbow Dash continues to watch Fluttershy and Pinkie coach the buckball team. When the cheer squad appears to debut their new routine, it is just as clumsy and uncoordinated as when they first started due to Rainbow's overall lack of direction. Later inside the school, Rainbow's continued dismissal of cheerleading upsets Yona to tears and causes Shimmy Shake, Lighthoof, and Ocellus to quit the squad. Smolder angrily chastises Rainbow for not giving coaching a proper effort, mentioning that she was excited to be on the squad when she learned Rainbow was going to be the coach.

"You're the most enthusiastic pony in Equestria when it's something you care about. I just wish we were one of those things."
— Smolder

Realizing what a poor coach she has been, Rainbow Dash comes up with an idea to fix things. She has Snips gather the squad on the buckball field, where Rainbow Dash apologizes and says even though she does not care about cheerleading, the squad does, and Rainbow cares about the squad. To that end, she resolves to help them improve their routine. With Rainbow's guidance, Yona learns to stomp in time with Shimmy Shake and Lighthoof's dancing, Ocellus cheers more loudly with a megaphone, and Smolder adds just the right amount of smoke effects with her smoke breath.

On the day of the buckball game between Twilight and Celestia's schools, Rainbow Dash is just as nervous to see the results of her coaching efforts as Fluttershy and Pinkie Pie are. The cheer squad debuts their new and improved cheering routine during halftime, and thanks to Rainbow's help, it is successful and met with great applause from the crowd. Though Twilight's team ultimately loses to Celestia's team, Rainbow Dash is immensely proud of the cheer squad.

Twilight feels vindicated in that she was right all along about Rainbow being the perfect pony to coach the squad, and she conveys the lesson that Rainbow does not have to care about something that other ponies like as long as she cares about the ponies who like it.

Twilight Sparkle: I know how you feel. Young athletes ready to take the field. Ooh, you could almost breathe in the excitement!
Fluttershy: [gasps]
Snails: I don't think you should breathe it in so hard.

Rainbow Dash: I didn't know you three would be here.
Yona: [laughs] Yona want to try and make pony pyramid!
Ocellus: And I thought this could be my chance to make an impression on everypony. You know, for something other than changing shape.
Rainbow Dash: I didn't realize you were into school spirit, Smolder.
Smolder: Eh. I just came with these two. Guess they think you can make cheer squad cool or something.

Snips: A good cheer squad gets the fans excited, which gets the team excited. But if nopony's excited, then no... pony... buys... any... souvenirs!

Snails: The trick to being a good buckball keeper is to do nothin'. Just empty your mind. Be the ball.
Pizzelle: Uh, balls don't have minds.
Snails: Exactly.

Smolder: Uh, what're we supposed to do with hay?
Rainbow Dash: Beats me, but Applejack seemed pretty sure about it. Oh, I almost forgot.
Ocellus: A rhyming dictionary?
Rainbow Dash: Yeah. Zecora's a lot less helpful than you'd think.

Snips: Anypony want to buy an official School of Friendship cheer squad headband? Now I personally would buy them before the performance!

Princess Celestia: I realize the game of buckball traditionally requires an Earth pony, a Pegasus, and a unicorn, but I appreciate you allowing my students to compete.
Twilight Sparkle: Of course, and the wings and magical-dampening ring you made seem to be working really well.
Princess Celestia: Indeed, though not as well as your team. [echoing] Come on, School of Magic!

Twilight Sparkle: Wow, Rainbow Dash! It's almost like you were the perfect pony to coach cheer squad after all!
Rainbow Dash: Wait a second. Was this one of those things where you knew the lesson I needed to learn before I learnt it?
Twilight Sparkle: You mean like how you don't have to care about a thing other ponies like as long as you care about the ponies who like it? Nope. Don't know what you're talking about.
Rainbow Dash: Ugh! 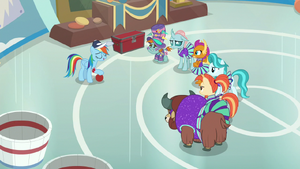