My Little Pony Friendship is Magic Wiki
Register
Don't have an account?
Sign In
Advertisement
in: Season 6 episodes, Recognized for awards
English

28 Pranks Later is the fifteenth episode of season six of My Little Pony Friendship is Magic and the one hundred and thirty-second overall. The title and the events of the episode are a reference to the 2002 horror film 28 Days Later and/or its 2007 sequel 28 Weeks Later.

In this episode, Rainbow Dash's pranking gets out of hand, so the other ponies decide to give her a taste of her own medicine.

In production order, this is season six episode sixteen.

One day prior to the episode's premiere, a 90-second extended preview was published by TV Insider.[1]

Marcel Duperreault, Todd Araki, Jason Fredrickson, Adam McGhie, Christine Church, and Roger Monk won a 2017 Leo Award for Best Sound in an Animation Program or Series for their work on this episode.[3]

A night in the forest

The episode begins with Fluttershy and her animal friends walking through the forest at nighttime. As a result of Fluttershy losing track of time during their picnic, the group is forced to make their way home after dark. Suddenly, a monstrous-looking creature appears in the shadows before them, causing them to flee and cower in terror. When the creature comes out of the shadows, it is revealed to be Rainbow Dash in disguise, pulling a prank.

Though Rainbow is very amused by her own prank, Fluttershy finds no humor in it at all because she was scared. Rainbow Dash claims that Fluttershy is scared too easily, and when Fluttershy denies it, Rainbow scares her yet again just by saying the word "boo".

The next day, the Mane Six gather in the Castle of Friendship throne room to discuss Rainbow's pranking habits. When Rainbow says her pranks are just harmless jokes, the others—except for Pinkie Pie—argue that they are not harmless if the party being pranked is not amused. During this discussion, Rainbow pranks Twilight Sparkle with a whoopee cushion in her throne. Similar to the night before, Rainbow and Pinkie Pie laugh, but Twilight does not.

Rarity makes the argument that if Rainbow Dash cannot put forth the effort to pull off a prank that everyone can enjoy, she might as well not pull off any pranks at all. Rainbow perceives this as a challenge and leaves the castle to plan more pranks.

Later that day, Rarity enters her workshop to put the finishing touches on Sweetie Belle's uniform for the upcoming Filly Guide Cookie Drive. Inside, she finds the uniform standing atop a giant cake—with a note attached that reads "You asked for it." Expecting a booby trap by Rainbow Dash to be set off if she tries to retrieve the uniform, Rarity attempts to make a brand new uniform, but she finds her sewing machine has been replaced with a sewing machine-shaped cake.

That night, Applejack sets up bells, pots, wind chimes, and other noisemakers around her bedroom in case Rainbow tries to prank her in her sleep. These preventative measures fail, however, as Applejack wakes up the next morning in the pig pen. Over the course of the rest of the day, Rainbow Dash pulls similar pranks on Cranky Doodle Donkey, Spike, Big McIntosh, Mr. Cake, and Cheerilee—pranks that are funny only to Rainbow herself.

A prank too far

The ponies go to Pinkie Pie and inform her of Rainbow Dash's endless string of unfunny pranks. Though Pinkie herself has already been pranked and found it funny, the rest of Ponyville think Rainbow Dash is getting too carried away. Because Pinkie shares Rainbow's love of pranks, the ponies ask her to tell Rainbow to stop, much to Pinkie's discomfort.

Pinkie approaches Rainbow Dash at her house, but before she can tell her to stop pranking ponies, Rainbow shares her plans for her biggest prank yet. She plans to replace all the cookies being sold during the Filly Guide Cookie Drive with joke cookies that give everyone who eats them "rainbow mouth", causing their mouths and teeth to turn rainbow colors. Unable to see much humor in such a prank, Pinkie tries to convince Rainbow to stop pranking for a little while, but Rainbow refuses.

Some time after replacing the Filly Guide cookies, Rainbow goes to Sugarcube Corner and finds Pinkie Pie sick in bed with rainbow mouth and craving more cookies. She tries to pull Pinkie out of bed so she can see the results of Rainbow's prank, but Pinkie is too weak to move...

Night of the living hunger

With Applejack and Rarity's help, the Cutie Mark Crusaders prepare to begin their cookie drive. Rainbow Dash arrives to help out too, and Applejack warns her not to do anything that could potentially ruin the fillies' night. Rainbow promises to behave herself.

The Crusaders then spend several hours selling cookies door-to-door until almost all of their boxes have been sold. Rainbow Dash eagerly waits to see the results of her prank, but she notices that all of Ponyville has gotten eerily quiet. She flies around town looking through ponies' windows and sees cookies and cookie boxes scattered everywhere, but there are no ponies in sight. At Sugarcube Corner, she finds Mrs. Cake in the kitchen eating cookies. When Mrs. Cake turns around, her mouth is covered in rainbow, and she groans like a cookie-craving zombie. Pinkie Pie, Pound Cake and Pumpkin Cake also appear exhibiting similar behavior.

As Rainbow flies out of the bakery and across town, she sees other ponies with rainbow mouth also acting like zombies and craving cookies, including her friends. She races back to Applejack, Rarity, and the Crusaders before they too fall victim to this plague and beckons them to find a hiding place. Before long, the zombified ponies catch up, and Rainbow and the others flee in terror.

Rainbow Dash, Applejack, Rarity, and the Crusaders board themselves up inside the barn at Sweet Apple Acres, intending to wait until the effects of the cookie zombie plague wear off. However, the zombified ponies quickly surround the barn and pound at the doors and windows. Rainbow reveals to the others that she replaced the Filly Guide cookies with joke cookies as a prank, but she didn't intend for this to happen.

Unfortunately, Rarity, Applejack, and the Crusaders have already eaten the joke cookies and have now turned into zombies as well, making Rainbow the only non-zombie left. The rest of the zombies break into the barn and close in on Rainbow. As she is backed into a corner, she admits that her prank was supposed to be funny, but this is not funny at all. With Rainbow's admission, the ponies suddenly drop the charade, having been only acting like zombies until now.

"GOTCHA!"
— All except Rainbow Dash

Applejack reveals that, after Rainbow told Pinkie of her plan to prank the whole town, Pinkie orchestrated the fake zombie plague to teach Rainbow a lesson. Because Rainbow doesn't see the humor in this prank, she realizes how she has been making everyone else feel with her own pranks. She apologizes to the others for getting carried away and starts thinking of ways to top their zombie prank, much to the other ponies' sheer disbelief.

Applejack: A whoopee cushion is like a joke shortcut.
Rainbow Dash and Pinkie Pie: WHAT?!

Pinkie Pie: Pranks are so much fun!
Twilight Sparkle: Not for everypony. And it doesn't seem like Dash is taking the time to find out who enjoys them and who doesn't.

Rainbow Dash: [chuckles] Wow. Your face is still pretty rainbowed.
Pinkie Pie: Yeah, I haven't really [coughs] been feeling well. And these joke cookies are the only thing that makes me feel better. You don't have any more, do you?!

Rainbow Dash: So I may have switched all the Filly Guide cookies for joke cookies that were supposed to make ponies' mouths rainbow but somehow turned everypony into mindless cookie-eating zombies instead! I figure we just hide out here until the effects wear off, and as long as nopony else eats the cookies, we'll be fine.
Rarity: That's lovely, darling, except for one thing... [droning] We've already eaten theeeeeeeeeemmmmm...
Applejack: [droning] Looks like your prank up and backfiiiirrrrreeeeed...

Rainbow Dash: Please! Stop! I never meant for this to happen! It was just a harmless prank! It was supposed to be funny! But this isn't funny at all!
Pinkie Pie: Exactly!

Rainbow Dash: You can't just go around—
Twilight Sparkle: —pranking whoever you feel like?
Fluttershy: Without thinking about how it might make them feel?
Rarity: Or if they'd even enjoy it?
Applejack: Or think it's funny?
Rainbow Dash: Yeah! [beat] Ohhh. I see what you did there. 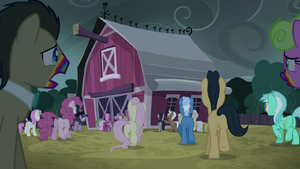