For the network ID titled 8-bit and the promo titled 8 bit, see Commercials#Miscellaneous and 8 bit.

8-bit[note 2] and Gaffer are two male ponies, 8-bit a Pegasus and Gaffer a unicorn, who appear in the IDW comics. They are Shining Armor's friends, others being Gizmo and, later, Cherry Fizzy and Spearhead.

Gaffer somewhat resembles Sunburst. His name refers to the head electrician/lighting technician of a production in television and film. It may also refer to The Lord of the Rings character Hamfast Gamgee. Some of his dialogue in My Little Pony: Friendship is Magic Issue #12 alludes to Sam Beckett of Quantum Leap.

In the IDW comics story arc Neigh Anything, 8-bit and Gaffer appear in flashback, along with Poindexter as Shining Armor's friends at Canterlot Academy and members of his Oubliettes & Ogres role-playing group. When Shining Armor falls in love with Princess Cadance and wants her to his very special somepony, 8-bit and Gaffer initially believe such a goal to be impossible, but after realizing how determined and lovesick he is, they decide to help.

Together, they put on an extravagant musical performance during the pep rally and Fall Formal parade to get Cadance's attention. When that fails due to Buck Withers' interference, they try to sabotage Buck's championship polo game, which also fails.

In the second part of the story, they enact a plan during the Fall Formal Gala to get Shining Armor closer to Cadance and expose Buck's true colors. While Cadance approaches Shining Armor, 8-bit and Gaffer distract Buck from the rafters. Their plan eventually ends in success, with Shining Armor and Cadance being crowned Fall Formal king and queen and sharing their first kiss.

In the My Little Pony: FIENDship is Magic Issue #5 story The Many Tales of Queen Chrysalis, 8-bit appears on page 12 in the present day on a date with Rarity. However, Rarity talks about herself the whole evening, causing 8-bit to doze off.

In the My Little Pony: Friendship is Magic Issue #41 story Rainbow Dash and the Very Bad Day, 8-bit appear on page 12 arguing with Shining Armor and Poindexter while under the effect of the Drearies. They reconcile on page 17, and Gaffer reads a Daring Do book on page 18.

8-Bit and Gaffer are playable characters in Gameloft's mobile game, and are also boss battle helpers for the "Presentable in Periwinkle" event. 8-Bit:
One of Shining Armor's more down to earth Academy buddies, 8-Bit was always up for a friendly game of 'Hocus Pocus: The Get-Together.'
Gaffer:
The dedicated Oubliettemaster of Shining Armor's old O&O group, Gaffer always had a plan for every situation. Some of them didn't even involve exploding polo mallets! 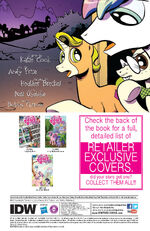 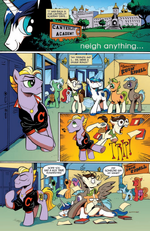 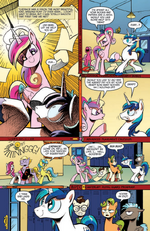 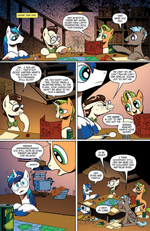 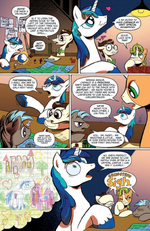 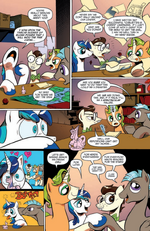 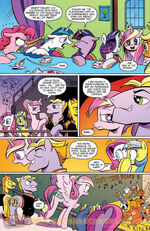