A Bird in the Hoof

A Bird in the Hoof is the twenty-second episode of the first season of My Little Pony Friendship is Magic. In this episode, during a visit from Princess Celestia, Fluttershy sees the Equestrian royal's sick bird and decides to take her home to look after. The episode title is a play on the proverb "a bird in the hand is worth two in the bush," meaning it is better to stick with something one already has, rather than pursuing something one may never get.

According to Lauren Faust, this episode, "was originally conceived as a tug-at-your-heartstrings style episode about losing a pet."[2]

Fluttershy has just finished her routine caretaking when Angel arrives, attempting to remind her of something by showing her a watch. After a few guesses, Fluttershy realizes that she's late for brunch with her friends and Princess Celestia. Fluttershy stresses over how she looks and what to wear, and looks through a rack of dresses which carries the Grand Galloping Gala dresses from Suited for Success. When Fluttershy is still hesitant after leaving the house, Angel locks her out to prevent her from wasting additional time.

The brunch takes place in Sugarcube Corner's snack shop where Spike is working in the kitchen, wearing a chef's hat, using his fire breath to bake pies. Twilight Sparkle is already nervous about the Princess' arrival and whether she'll approve of her friends, despite the fact that she had already met – but not spoken to – them on several occasions. Twilight's friends' mannerisms during the brunch do nothing to quell her anxiety. Mr. and Mrs. Cake make sure the princess has plenty of tea to drink; the Princess thanks them for each refill, but grows awkward due to the constant hospitality. She decides to have a little fun with them by pretending to sip from her cup, making them overfill it.

While Celestia speaks to Fluttershy about what Twilight told her from her letters, she's distracted by her pet bird Philomena, whose condition appears to be less than well; however, before Celestia can stay long, one of the Princess' royal guards informs her about her engagement with the Mayor, and she is forced to leave. Everyone is relieved. However, Celestia leaves her pet in the shop and Fluttershy, believing it to be sick, decides to take it into her house for treatment.

"Don't you worry, Philomena. I'll nurse you back to health. As a favor to the princess, who's obviously just far too busy to care for you properly. I'm sure the princess will appreciate the help."
— Fluttershy

Oddly enough, Philomena appears to be a very difficult patient to Fluttershy. She tries everything she can think of, including taking her temperature, attempting to make her ingest a medicine tablet, making tomato soup, and even having her and a former patient of hers, Hummingway, sing together to her.

Her condition does not improve, and she ends up coughing mouse food in Fluttershy's face. At this point, she's convinced Philomena has a "tickle" in her throat, and sets up a humidifier to clear it. It is not, however, effective as evidenced by another cough despite her therapy. Fluttershy refuses to give up, however, and tries some more remedies (aroma therapy, warm bath, and ointment); none of them work.

By this time, Philomena appears to be even sicker. As a last resort, Fluttershy decides to attach the feathers that had fallen off with surgical tape; predictably, it fails to work. Just as she is about to give up, there's a knock at the door from Twilight Sparkle. She's here to thank Fluttershy for making a good impression, but is shocked after she sees Philomena in the house. While she sympathizes with Fluttershy's good intentions, she insists that she still had taken the bird without Celestia's permission, and Twilight believes that the consequences will be dire. Against her better judgment, Fluttershy and Twilight agree, and put Philomena in a basket so she can be returned to her cage.

Just as they reach the exit of the house, Celestia's guards arrive to relay the news about the missing bird. She and Fluttershy attempt to lie their way out of the situation, and wish the guards luck on their search. Despite the fact that the lie includes fake coughing and claims of day air being drier than night air, it works well enough for them to leave quickly. It's clear that they cannot simply return Philomena at this point (Twilight believes that Fluttershy could be banished, put in a dungeon or banished and then put in a dungeon in the place that she is banished), so they decide not to risk it.

Fluttershy still hopes that she can cure Philomena. However, she lacks the assertiveness to cure her, so Twilight offers to help by giving "tough love," using much more abrasive techniques than Fluttershy did. Just as Twilight is about to force-feed some soup to Philomena, she escapes through the door, though the door-frame on Philomena's cage is actually no larger or smaller than the other viewing holes on the cage.

The ponies pursue the bird in a chase scene around Ponyville, trying to catch her while avoiding the guards.

Twilight Sparkle and Fluttershy find their other friends, but they're confused as to why they're scattered all over the place, lifting them up and down. They finally discover Philomena on top of the town's fountain statue; she has lost all her feathers and appears to be dying. She then falls off the statue rather dramatically. Fluttershy rushes over in an attempt to catch her, but can only watch in sheer horror as she spontaneously reduces herself to ash.

Just as the animal-loving Pegasus begins to cry, Princess Celestia arrives to discover the commotion; Twilight, believing her mentor will go easier on her, tries to cover for her, but Fluttershy insists that she should come clean and tell the truth instead, even at the risk of punishment from Equestria's ruler. The princess tells the pile of ash to "stop fooling around," to which it responds by materializing into a majestic red-and-orange bird. She explains that what appeared to be sickly molting was actually just another part of a phoenix's life cycle. Apparently, Philomena took advantage of this as an opportunity for mischief and is told to apologize.

Fluttershy receives no punishment, but Celestia reminds her that everything could have been avoided if she just asked to take care of Philomena. Fluttershy apologizes for the entire ordeal. Twilight realizes that this situation is a lesson about asking before taking matters into your own hooves, and asks if the Princess would like a report, but Celestia declines. Later, Rainbow Dash gets Philomena to tickle the royal guards on their noses with a feather as a prank, and when it is successful, she gives Rainbow Dash a high five, whilst Celestia, the royal guards, and the Mane Six laugh with them.

Fluttershy: You... found a watch? You... wanna be a watch? You're running! Running out of time? No. You're... late?
[a clock strikes four]
Fluttershy: I'm late for a very important date!

Rarity: Don't touch me! Watch the dress! Careful! You're gonna spill that on me. Oh oh! That looks delicious. What is it? Oh! Does it stain? Keep it away from me!

Rarity: Stay right where you are. All I want is a clear path to the exit. Nobody move, and my dress won't get hurt. Stay back! Back, I say!

Rainbow Dash: What are you two doing? Are you having a race? Oh! Can I play? Ok, one two three go!

Princess Celestia: A phoenix is a majestic, magical bird. While it appears healthy and happy most of the time, every so often, it must renew itself by shedding all of its feathers and bursting into flames. Rather melodramatic, if you ask me... 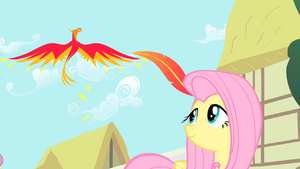 A Bird in the Hoof image gallery