Main category: A Bird in the Hoof images

Another beautiful day at the cottage.

I should smile because I broke my leg.

No creature is too small in need of Fluttershy's assistance.

Ooh, it was no problem at all.

Look at the time!

Just look at the clock.

Angel is a clock.

Angel, running to hint something to Fluttershy.

Ooh, Angel you can be so cute sometimes.

The door is over there, use it.

The clock, near Fluttershy's cottage.

Both arms are the same length.

You better get going!

Pacing around her cottage.

Is her mane okay?

Fluttershy must be holding onto Twilight and Pinkie's gala dresses

She's still not so sure whether she should go or not.

But, I can't disappoint Twilight.

She still looks so worried.

Angel, ready to have the house to himself.

Finally, some peace and alone time.
Add a photo to this gallery

Rainbow Dash wonders what the guards' pay is like

You think you're cool enough?

Aren't I a totally silly pony?

*boop* Give me muffin please?

Apparently, Rainbow thought impersonating Derpy would get a rise out of the guards. It didn't.

Can I come in?

Luckily Twilight is there to confirm who she is!

Princess Celestia, is right over there.

Delivery on the way

Mr.Cake with a delightful smile on his face.

Here are some more desserts.

Me nervous? Don't be silly.

"Wow, Twilight, I thought I was the only one who got nervous at social gatherings."

Goodness Twilight, the Princess seems more calm than you do.

I'm glad to be here.

After all, what I wouldn't do for a good friend.

Fluttershy is all smiles.

Did I over dress?

Don't you touch me!

Confused about what to eat first.

Should I eat this...

Ooh, how about this!

Which food should she eat first, the pie or the lettuce or what is it?!

Fluttershy is all smiles.

Pinkie in the air.

Pinkie, hopping over a table.

I love pie so much, no wonder it's in my name.

About to bite into the cupcake.

Mr. and Mrs. Cake aren't at all happy with how Pinkie is acting...

I do believe I feel my tail being dragged.

Here are some treats..

Eating and drinking in a beautiful princess way.

If you need anything, just ask.

Pouring her another cup of tea.

Making sure the Princess always has a drink

You ponies can such silly ponies sometimes.

Ready to refill the cup.

Fluttershy and Celestia talking about animals

Ooh yes, I enjoy spending time with my woodland creatures.

You never told me how cute she was, Twilight.

Is that bird okay?

Philomena in her royal cage

Surprised looks from both Applejack and Rarity.

Twilight is shocked at the brunch ending so early

Minuette and Cherry Berry,taking a nap?

About to chow down.

I got nothing to eat.

A hyper Pinkie kicks another pony in the face.

"Nopony move, and the dress won't be hurt!"

While Applejack leaves with the jackpot.

At least nothing bad happened.

Spoke too soon there, Twilight.
Add a photo to this gallery

Fluttershy decides to look after Philomena

Fluttershy wishes she could remedy the phoenix "problem" quickly.

"Oh my. We'd better get you to bed right away."

Better get your temperature.

Here, maybe this blanket will warm you down.

What are you doing?

Blowing some steam off.

Try some, I'm sure it'll help.

Won't you at least try?

You don't want soup either?

Ooh, what am I supposed to do to help you?

Her head in the soup.

Philomena, you're a silly bird.

...Ready for another song?

Fluttershy tries to get Philomena to sing to feel better

And barfs it back up.

You should be calm now.

I see some hope.

So much for aromatherapy...

Wiping away her sweat.

What's that?
Add a photo to this gallery

What in Equestria, is Princess Celestia's pet doing here?

I just wanted to help her out.

Quick, hide her in the basket!

Help, my tail is possessed!

Before the guards see!

Twilight freaking out.
Add a photo to this gallery

The guards ask about Philomena.

Nothing out of the ordinary here.

Covering up Philomena's coughing with their own fake illnesses.

The guards aren't sure what to think. 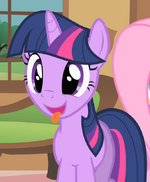 Twilight has a puppy face too!

I hope they leave soon.

Twilight gets rid of the guards.

You're really freaking out, aren't you Twilight?

Fluttershy in the Everfree Forest.

Trapped in a prison.

She wouldn't do that, Twilight.

She won't even take her medicine.

Behold, The Cone of Shame...

The floor is dusty.

Look at me! I'm a metal detector!

She won't listen to me.

I don't think I like the look on her face right now...

Wrong way.
Add a photo to this gallery

Fluttershy chases her out the door.

Twilight and Fluttershy running to find the bird.

Is she up there?

The Royal Guards, asking ponies around.

The guards are showing posters of Philomena now

Handy disguise you've got there...

A bird in disguise

Are you thinking the same thing?

Vandalising the missing posters so nobody will find her

Are you guys racing?!?

...on top of Fluttershy.

"Philomena, come down from there! You'll hurt yourself!"
Add a photo to this gallery

Is there such disease of dying for being bald?

Fluttershy rushes in to save her.

Tears making their way to her eyes.

A bird in the hoof is worth a thousand meme images.

Poor Fluttershy feels awful for taking the bird and not being able to nurse her back to health, and now has to deal with Celestia?

Fluttershy turns around to face Celestia.

This is all my fault, Princess...

...Please, let me handle this.

Pinkie, random as ever.

Wait, what were we talking about again?

A sad Fluttershy apologizes to the princess...

Taking a look at the ashes.

"Oh, stop fooling around, Philomena. You're scaring everypony."
Add a photo to this gallery

Philomena in all of her glory

Philomena is a phoenix

You were just playing around with me.

Flying beautifully in the sky.

Like the legend of the phoenix, all ends with beginnings

With her eyes closed..

Hearing she needs to apologize.

Philomena apologizes to Fluttershy for making her so worried

Rarity, that bird is more beautiful than I am?

So glad everything is good again..

Twilight in a cute shot.

Resting on Celestia's back.

So thanks her with a present!

A plotting Rainbow has another thing for Philomena to do.

Oh forget it, let us laugh!

All's well that ends well.
Add a photo to this gallery

A storyboard from the episode, by Sabrina Alberghetti
Add a photo to this gallery
Retrieved from "https://mlp.fandom.com/wiki/A_Bird_in_the_Hoof/Gallery?oldid=2173532"
Community content is available under CC-BY-SA unless otherwise noted.