Shining Armor and Princess Cadance are set to be married, but Queen Chrysalis has a devious plan to ruin Shining Armor's happily ever after and the future of Equestria.

After a short recap of the events from the first part, Princess Cadance’s imposter has trapped Twilight Sparkle in the caves beneath Canterlot. The image of her false form appears on the crystal walls, and she hints at her plans for Shining Armor and taunts Twilight. Twilight shoots magic at the cackling reflections and blasts away a wall to reveal the real Princess Cadance, startled and disheveled. Twilight quickly has Cadance at her mercy, believing her to be the imposter. Cadance pleads with her, telling her that she had also been imprisoned inside the cave, but Twilight doesn't believe her. Cadance finally recites the "Sunshine, Sunshine" rhyme she had taught Twilight as her foal-sitter, which the imposter didn't know. Twilight's suspicions are banished, and the two embrace.

In the song This Day Aria, Part 1, Cadance's imposter sings about how her plans will come to fruition as she prepares for the wedding in Canterlot, and the real Cadance sings about her determination to save her fiancé as she and Twilight try to find a way out of the crystal caves. After the song ends, a camera pan shows that Cadance and Twilight are beneath the hall where the wedding ceremony is starting. Twilight teleports herself and Cadance to the cave's exit, but they are confronted by the bridesmaids: Minuette, Lyra Heartstrings, and Twinkleshine.

Celestia is about to pronounce the couple mare and colt when Twilight and Cadance burst in. A flashback reveals that Cadance and Twilight distracted the bewitched bridesmaids with a bouquet of flowers before escaping from the cave. She declares the imposter to be a changeling, a creature that takes the form of a loved one and gains power by feeding off of love. The imposter, enraged, reveals her true form: Chrysalis, Queen of the Changelings. Chrysalis says that Equestria has more love than any place she's ever encountered, and conquering Equestria will give her and her changeling army more power than they've ever dreamed of. Even as she speaks, the changeling army is battering away at Canterlot's defenses.

Princess Celestia, infuriated at having been deceived, declares that even though Shining Armor is powerless, she will defend her subjects. She fires a white-golden beam of magic at Chrysalis, who retaliates with a green beam of magic. Chrysalis' beam overpowers Celestia's, smacking Celestia to the floor, knocking off her tiara, causing her mane and tail to stop flowing, and scorching her horn. Chrysalis is astonished by the power she has gained from Shining Armor's love. Struggling to remain conscious, Celestia instructs the six main characters to retrieve the Elements of Harmony, their only hope for stopping Chrysalis.

Race to the Elements

The six ponies race towards Canterlot Tower where the elements are held. The changelings finally shatter the protective sphere and start wreaking havoc in the city. The six ponies are hemmed in by a crowd of hungry, vicious changelings, which take on the appearance of the six. Using everything from their hooves to Pinkie Pie's party cannon, the six ponies defeat the first wave of changelings. However, their reprieve is short; Canterlot Tower has already been overrun by more changelings. With the numbers stacked heavily against the Mane Six, they are eventually captured.

The power of love

The changelings have imprisoned Celestia in a lime green goo cocoon in the wedding hall and glued Cadance’s hooves to the floor with the same substance. Cadance insists that the six friends will save them, but a group of Changelings walk in with the friends held in custody. Chrysalis gloats that everyone but Twilight was too fixated on the wedding to notice anything. Applejack apologizes on behalf of the others for ignoring Twilight’s doubts, and Twilight assures Applejack that she has no hard feelings. Chrysalis sings a stanza to the tune of This Day Aria as she observes the chaos in the streets below.

Twilight frees Cadance and urges her to try and break the spell on Shining Armor. Cadance embraces him and breaks his trance with her spell of love. Shining Armor says that he doesn’t have the strength to repel the changelings, but Cadance declares that her love will give him strength. The two connect horns, creating a powerful, bright pink, purple and white whirlwind of magic that lifts the couple into the air and shakes the room. When they look into each other's eyes, their bodies glow with bright white light and take on a heart shape as the magic expands outward as a bright, purple sphere. The ponies shade their eyes from the light, while Chrysalis and the changelings are thrown out of Canterlot. With the changelings gone, and Celestia free from her cocoon, the ponies prepare for the real royal wedding.

At the wedding, Twilight takes her reinstated place as best mare as their parents look on proudly from the audience. Celestia pronounces Cadance and Shining Armor mare and colt and levitates their rings onto their horns. Celestia commends the heroism of Twilight and her friends and emphasizes the importance of trusting one's instincts. The bride and groom step out to a balcony to wave to a crowd of cheering ponies. As Shining Armor and Cadance kiss, Celestia reminds Rainbow Dash to perform her sonic rainboom for the ceremony.

The scene changes to the evening wedding reception in the courtyard, where the newlyweds start dancing. Princess Luna joins her sister and the Mane Six and unknowingly asks if she missed anything. DJ Pon-3 works her turntables and Twilight sings Love Is In Bloom while a montage of humorous and memorable photos taken during the party is shown. At the end of the party, Shining Armor thanks Twilight and they hug. Before departing, Cadance tosses her bouquet to the onlookers, which Rarity, in a screaming fit, snatches from the other bridesmaids. Twilight and her friends happily watch the royal carriage depart, and Spike unknowingly humors them by saying that he has even better plans for the bachelor party. The episode ends as fireworks light the sky above Canterlot.

Princess Celestia: Princess Cadance and Shining Armor, it is my great pleasure to pronounce you...
Twilight Sparkle: Stop!
Queen Chrysalis (as Cadance): Ugh! Why does she have to be so possessive of her brother? [sobbing] Why does she have to ruin my special day?
Princess Cadance: Because it's not your special day! It's mine.
Queen Chrysalis (as Cadance): What? But how did you escape my bridesmaids?

Queen Chrysalis: Ah, ah, ah. Don't want to go back to the caves, now do you? Ever since I took your place, I've been feeding off Shining Armor's love for you. Every moment he grows weaker and so does his spell. Even now my minions are chipping away at it.

Queen Chrysalis: Soon, my changeling army will break through. First, we take Canterlot. And then, all of Equestria!
Princess Celestia: No. You won't. You may have made it impossible for Shining Armor to perform his spell, but now that you have so foolishly revealed your true self, I can protect my subjects from you!

Queen Chrysalis: It's funny, really, Twilight here was suspicious of my behavior all along. Too bad the rest of you were too caught up in your wedding planning to realize those suspicions were correct!
Applejack: Sorry, Twi. We should have listened to you.
Twilight: It's not your fault. She fooled everypony!
Queen Chrysalis: I did, didn't I?

Shining Armor: No! My power is useless now. I don't have the strength to repel them.
Princess Cadance: My love will give you strength.
Queen Chrysalis: [laughs] What a lovely, but absolutely ridiculous sentiment.

Princess Celestia: (to Twilight) Don't worry about me. I'm fine. You have a real wedding to put together.

Twilight Sparkle: Seriously, though. I get why the Queen of the Changelings wanted to be with you, but how did you get someone as amazing as Cadance to marry you?
Shining Armor: I told her she wouldn't just be gaining a husband, she'd be getting a pretty great sister too.

Princess Celestia: (to Twilight) This is your victory as much as theirs. You persisted in the face of doubt, and your actions led to your being able to bring the real Princess Cadance back to us. Learning to trust your instincts is a valuable lesson to learn.

Princess Luna: Hello, everypony. Did I miss anything?

Shining Armor: Twilight! None of this would have been possible without you, little sis. Love ya, Twily.
Twilight Sparkle: Love you too, B.B.B.F.F.
Shining Armor: Ready to go?
Princess Cadance: Oh! Almost forgot.
Rarity: It's mine! Oof! Aha.

Twilight Sparkle: Now this was a great wedding.
Spike: Oh yeah? Just wait until you see what I have planned for the bachelor party!
Everypony: [laughing] 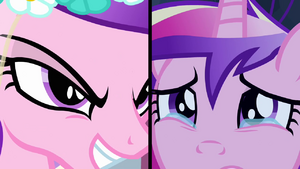