A Dog and Pony Show

A Dog and Pony Show is the nineteenth episode of the first season of My Little Pony Friendship is Magic. In this episode, Rarity is searching for a new load of gems with Spike's assistance. However, when a group of creatures called the Diamond Dogs abduct Rarity, Spike and the other ponies head into the Dogs' underground burrows to rescue her.

The phrase "a dog and pony show" originated in 19th century America as a term for small traveling circuses that toured through rural areas. The modern usage refers to an over-staged performance. Typically, the term is used to connote disdain, jocular lack of appreciation, or distrust of the message being presented or the efforts undertaken to present it. The episode's plot is reminiscent of the O. Henry story "The Ransom of Red Chief," in which a young boy's antics drive his kidnappers so crazy that they end up paying his family to take him back.

In the iTunes release of the episode, Rainbow Dash and Fluttershy are missing when the group arrives at the bottom of the hole. Another iTunes exclusive error, albeit minor, is the inconsistency of the appearance of Twilight Sparkle's rope harness: For example, in one scene, when Twilight Sparkle bucked off the Diamond Dog guard riding her, the guard haphazardly pulled off the harness with his claws as he was flung away. In other releases of the episode, Twilight Sparkle's harness remained around her head rather than being pulled off. The show's director, Jayson Thiessen, explained that iTunes somehow got an older version of the episode that was not meant for air.[2]

The error with Rainbow Dash and Fluttershy missing is also present in some international airings and in the Netflix version of this episode, as well as the Australian MLP Volume 4 DVD. It also remained unfixed in the iTunes 1080p version of the episode.

The scenes when Rarity gives Spike a gem, Spike using the gem to fish out the Diamond Dogs, and Spike's heroic flashback appears in A-Dressing Memories.

The hunt for gems

Inside the Carousel Boutique, as Rarity is putting the last gem onto a garment, she hears a customer walk into her shop. She casually greets the customer, only to find out in shock that it's "Pony of Pop" sensation Sapphire Shores. Sapphire explains that she had heard of Rarity's fashion designs from a local magazine and came to browse the shop for designs for an upcoming tour. Rarity happily shows Sapphire her latest finished project: a garment completely covered in gems. Sapphire takes an immediate liking to the bejeweled garment, saying that she will buy it and five more like it, each one featuring a different jewel. Having used her entire gem supply for just the one outfit, Rarity faints.

"Yes, I do have that effect on ponies."
— Sapphire Shores

With assistance from Spike, Rarity goes to find a new load of gems outside Ponyville. When they first uncover some, Spike can barely contain his hunger, but Rarity reminds him that they need to collect the gems for Sapphire Shores' outfits. Spike manages to curb his appetite, and in the end Rarity rewards him with a blue gem. Rather than eat it right away, he decides to keep it as a gift from his crush.

Hiding in the bushes is a trio of canines who call themselves the Diamond Dogs. They are in awe of the large haul of jewels being carted along by the baby dragon, mistaking him as a gem tracker. They then hear Rarity's voice and discover that she is the one finding the gems. Ambushed by the mutts, Rarity panics, but Spike intercepts them so Rarity can escape. However, they shake him off and succeed in abducting Rarity before escaping into their hole in the ground.

After explaining the situation to Twilight Sparkle, Pinkie Pie, Fluttershy, Rainbow Dash, and Applejack, Spike brings them to the spot of the incident only to see the entire site laden with holes. They encounter the dogs but are outmaneuvered to exhaustion when the dogs refill the holes and then pop out of them to trip the ponies up.

As the ponies worry about Rarity and how frightened she must be, Spike uses his blue gem as bait to catch one of the dogs with a fishing rod. The scene dissolves into a fantasy sequence where Spike imagines himself as a debonair knight coming to Rarity's rescue. His fishing line is snagged, and he and the ponies are dragged through a large underground tunnel that gives way to a whole network of tunnels. They theorize that the dogs had taken Rarity down the tunnel with the most gems, but there is no way to find her until Spike reminds Twilight that Rarity showed her how to track gems herself. Using the spell, Twilight locates the tunnel with the most gems.

Dealing with the dogs

Within the central area of the Diamond Dogs' den, the dogs demand Rarity find gems for them. She graciously finds them some gems and then asks to be let go, but the dogs order her to dig for the gems. She does so but very slowly and inefficiently. Frustrated at this pathetically slow pace, the leader calls on his comrades to do the digging. Rarity proceeds to make things exceedingly difficult for the dogs, complaining about her situation and even getting them to do all the work. But the dogs soon decide to endure Rarity's constant whining as long as she does as she's told. However, after one of the dogs calls her a mule, Rarity breaks down in tears.

"Oh, I've had just about enough of this!"
— Rover, fed up with Rarity's whining

In a nearby tunnel, Spike and the ponies hear Rarity's cries and rush to help her. A group of guard dogs sees them as new "workhorses" and ambushes them. Following Applejack's lead, the ponies buck the dogs off rodeo-style, and the guard dogs retreat. After they get rid of the guards, Spike hops on Twilight, brandishing a lance-like stalactite, and the six friends gallop to Rarity's rescue. They find Rarity after she's already cowed the Diamond Dogs into submission. The dogs, tired of Rarity's whining, offer to give away all of the gems they found, providing the ponies take Rarity with them.

On their way home, Rarity reveals that annoying her captors was all a ruse to keep them under control. Twilight sees this as a valuable lesson to write Princess Celestia about: just because someone is ladylike doesn't mean they're helpless.

Sapphire Shores: Well, as I'm sure you know, I'll be touring all of Equestria with my latest concert, Sapphire Shores Zigfilly Follies so I need to look seeeensational! OW!

Rarity: You've been very patient today, Spike. And for that you get the finest reward. This is from me to you. Is something wrong, Spike?
Spike: No. It's perfect.

Rover: We hunt for gems. But you are a better hunter. So now we hunt... for you!

Applejack: Now, I'm used to pickin' myself up and dustin' myself off, but Rarity won't even touch mud 'less it's imported.

Rarity: Oh, woe is me! What ever shall I do? Ah! Dirt, dirt! Get away, dirt! Oh! Make it stop, make it stop! Filthy, disgusting dirt. It stings, it burns. Help! Somepony save me, SAVE ME!

Fido: What are you doing? We said dig!
Rarity: Forgive me, but prior to you so rudely dragging me into your dirt pit, I had a pony-pedi, and I am not about to chip a hoof because you dislike my style of digging.

Rarity: Good heavens, what is that smell?
Rover: Smeeeeeell?
Rarity: Ah, mystery solved. It's your breath.

Rover: Search, Pony!
Rarity: Well, since you insist... But I must say the working conditions in here are simply dreadful. Musty and damp, it's going to wreak havoc on my mane. And this air is stifling, suffocating. And when I try to take a deep breath, the stench of all you dogs makes me nauseated. You look and smell like if you haven't bathed in weeks. Have you never heard of soap? You could all do with a good round of soap and water. Water, water, I'm terribly thirsty. Could I please have some water?
Spot: Good gracious, I can't take this anymore. BE QUIET, PONY!

Rarity: I am not "whining". I am complaining. Do you want to hear "whining"? This is whining! Ooohhhh! This harness is too tight! It's going to chafe! Can't you loosen it?! OH! It hurts and it's so rusty! Why didn't you clean it first?! It's gonna leave a stain, and the wagon's getting heavy! Why do I have to pull it?!
Spot: AAH! Make it stop!
Rover: Stop whining!!!
Rarity: But I thought you wanted whining!

Applejack: Ho doggies! If you can take this bull by the horns, you better be ready for a ride! Come on, ponies. Kick 'em up, kick 'em out. Buck 'em up, buck 'em down. 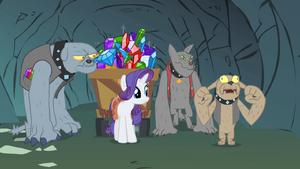