A Flurry of Emotions

A Flurry of Emotions is the third episode of season seven of My Little Pony Friendship is Magic and the one hundred and forty-sixth overall.

In this episode, Twilight Sparkle agrees to babysit her niece Flurry Heart despite already having a very busy schedule.

Jim Miller mentioned in a Twitter conversation on September 9, 2016, "I am aware of who Grogar is."[1]

At the Castle of Friendship, Nurse Redheart speaks with Twilight Sparkle about her visit to the Ponyville Hospital later that day; Cheerilee's class of foals all recently came down with the horsey hives, and Twilight plans to bring them presents and treats and read to them to cheer them up. Twilight and Spike thus have a full day of buying get-well presents at the toy store, borrowing a book from Cheerilee, and picking up treats at Sugarcube Corner, but Twilight is certain that they'll get everything done as long as they stick to the schedule.

Just then, Shining Armor, Princess Cadance, and Flurry Heart appear on the castle doorstep, and Twilight is excited to see her infant niece, showering her with affection and toys. Needing a day off from raising their daughter, Shining Armor and Cadance are hoping to attend an art show hosted by Spearhead, one of Shining Armor's old friends from the royal guard. Despite her already packed schedule, Twilight—calling herself the "best aunt ever"—agrees to babysit Flurry Heart for them. To equip Twilight for this task, Shining Armor and Cadance give her diapers, baby food, and Flurry's favorite stuffed snail toy named Whammy.

After seeing Shining Armor and Cadance off, Twilight spends some time playing with Flurry Heart, learning what new magic spells she knows in the process. When Spike reminds Twilight of their day schedule, Twilight suggests feeding Flurry Heart before they leave.

Shining and Cadance's day off

At the Ponyville Cafe, Shining Armor and Cadance look at some of Spearhead's abstract art pieces before he arrives to greet them. While they don't understand some of the art pieces, Shining and Cadance are relieved just to have a break from changing diapers and cleaning up baby food messes.

Meanwhile, Flurry Heart has made one such mess of mashed peas at Twilight's castle, causing Twilight and Spike to fall behind schedule. However, Twilight is certain that they can get things back on track. First, they go to the toy store to buy get-well gifts for the sick foals at the hospital. In an effort to both be time-efficient and keep Flurry Heart entertained, Twilight races through the aisles with her shopping cart. But before they can check out, Flurry Heart takes the cart on a joyride and topples a toy display. Twilight and Spike fall further behind schedule as Twilight cleans up the mess.

Next, Twilight and Spike go to the Ponyville Schoolhouse to borrow a storybook from Cheerilee. Spike tries to keep Flurry Heart appeased with her Whammy toy, but Flurry eventually ruins what Cheerilee had written on the chalkboard with baby drawings. After falling so far behind schedule, Spike suggests cancelling their visit to the hospital, but Twilight refuses, not wanting to disappoint the sick foals waiting for her.

Lastly, they go to Sugarcube Corner, where Twilight not only picks up snacks for the hospital foals but also apology treats for Cheerilee and the toy store's salespony. While she places her order, Flurry Heart plays with Pound Cake and Pumpkin Cake. When Pound and Pumpkin get into a fight over one of their toys, Flurry tries to make peace by splitting the toy into two pieces and giving half to each of them. Unfortunately, this only makes Pound and Pumpkin mad, and they throw cupcakes at Flurry in anger, making a mess in the bakery.

Hijinks at the hospital

Twilight and Spike finally arrive at the Ponyville Hospital only a few minutes late. There, she reads a story to the sick foals about a heroic pony named Gusty the Great and a villain named Grogar. While trying to get Twilight's attention, Flurry Heart throws a brief tantrum, causing her to lose her Whammy toy on a hospital cart. Upon realizing she lost her Whammy, Flurry Heart flies and teleports around the hospital searching for it, but she fails to find it. In her distress, she levitates Twilight, Spike, the sick foals, and their hospital beds into the air.

Twilight angrily snaps at Flurry to stop, causing her to cry and distance herself from her aunt. Realizing what she's done, Twilight apologizes to Flurry for neglecting her all afternoon. Flurry Heart forgives Twilight, and Twilight proposes that they spend the rest of the day playing together.

Meanwhile, back at the Ponyville Cafe, a number of Spearhead's art pieces remind Shining Armor and Cadance of various cute and funny incidents that Flurry Heart caused in the past. As they are reminded of Flurry Heart more and more, Shining and Cadance realize they deeply miss spending time with their daughter, and Spearhead gladly excuses them to leave.

At the castle, Shining Armor and Cadance find Twilight and Flurry happily playing together. Despite the fun they appear to be having, Twilight admits to Shining and Cadance that Flurry caused a bit of mischief throughout the day and that she shouldn't have agreed to babysit with such a full schedule. Twilight learns that being the "best aunt ever" to Flurry isn't about spending the most time with her but spending quality time with her.

Shining and Cadance agree to give Twilight more advance notice in the future about needing a babysitter. Meanwhile, at the hospital, Spike reads stories to the sick foals about a heroic storybook dragon.

Shining Armor: You remember my friend from the royal guard, Spearhead?
[beat]
Spike: Honestly, all of your friends' names are very similar.

Shining Armor: Is this art or... a mistake?
Princess Cadance: I have no idea.

Spearhead: Shining Armor! Cadance! How are the new 'rents? Gimme some hoof. Oh, it is so [grunt] good [grunt] to see you dudes! Hey, thanks for coming.
Shining Armor: Of course! We're having a great time! Loving all the... art!
Spearhead: Uh, that's a trash can.
Shining Armor: So it is! I knew that!
Spearhead: But hey, who's to say it's not art? Art can be anything that speaks to you.

Spike: Should I just cancel our visit to the hospital?
Twilight Sparkle: What?! Cancel?! We can't cancel, Spike! The sick foals are counting on us! And the B.A.E. would never throw in the towel like that!
Spike: B.A.E.?
Twilight Sparkle: "Best Aunt Ever"?

Spike: Huh. I shouldn't have doubted you.
Twilight Sparkle: Thanks! Wait, you doubted me?
Spike: [nervous squeak]

Twilight Sparkle: Oh, no. You're making the same face Cheerilee made. 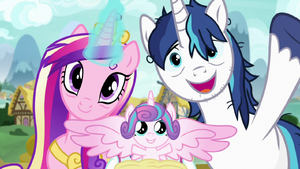 A Flurry of Emotions image gallery