A Friend in Deed is the eighteenth episode of the second season of My Little Pony Friendship is Magic and the forty-fourth episode overall. When a newcomer, Cranky Doodle Donkey, moves to Ponyville, Pinkie Pie attempts to befriend him, but her attempts end in failure. The title is a word play on the saying, "A friend in need is a friend indeed." This episode had the most songs within an episode, until its successor Magical Mystery Cure surpassed it with seven songs.

In October 2011 showrunner and supervising director Jayson Thiessen shared two cryptic photographs of the stop-motion setup with his Twitter followers, which later became the scene through Pinkie's imagination animated in felt.[2][3] The scene was originally intended to be animated the same way as the rest of the series.[4] The shapes were cut out by Thiessen's wife Jocelan, and animated by Thiessen himself in their basement.[5]

On November 8, 2015, episode writer Amy Keating Rogers posted a scene from the first draft of the script on Twitter that was cut from the final episode. This scene involves Rainbow Dash rejecting advances from a pony named "Gallop-a-Gus" at the same time Pinkie is talking to Twilight about Cranky Doodle Donkey.[6]

The scenes when Pinkie says Happy Birthday to Zecora, dresses up in her workout outfit and as a beaver respectably, and the Smile Song reappear in Cakes for the Memories.

The episode opens at Sugarcube Corner. Pinkie Pie turns on exercise music, dons a workout outfit, and proceeds to exercise while making silly faces. As she pauses for a moment, it is revealed she is entertaining Pound and Pumpkin Cake, who are unimpressed by her antics. Taking a breath after her failed attempt, she accidentally sits on a set of jacks. Leaping into the air in pain, she gets caught in the ceiling fan and thrown into a pile of stuffed toys, causing the babies to giggle at her misfortune. Finally achieving her goal, she pumps her hooves in the air and declares, "Nailed it!"

Later, Pinkie trots through Ponyville: she compliments Rose on her Calla lilies (though they are actually true lilies) and Mr. Waddle on his bow tie; she wishes a happy birthday to Cheerilee, a happy day-after-birthday to Zecora, and a happy birthday 132 days in advance to a donkey named Matilda, who is amazed that Pinkie can remember everything about everyone living in Ponyville. Pinkie explains that everyone is her friend, and above all, she loves to make her friends smile, leading into the Smile Song. Pinkie amasses a large crowd parading through Ponyville, ending face to face with a grumpy-looking donkey hauling a large wagon.

Upon seeing the donkey, she introduces herself and asks his name. After several guesses from Pinkie, the donkey reluctantly reveals that his name is Cranky Doodle Donkey. Pinkie sings about his name to the tune of the song. When Pinkie refers to him as Doodle, he angrily tells her never to use the name and continues ignoring her. A confused Pinkie, bemused by being rejected for the first time, shows her logic progression through a scene animated by stop-motion and felt cutouts. However, she resolves to befriend him by any means necessary. As Pinkie tries to strike up a conversation, Cranky reveals that he has moved to Ponyville to be alone with his memories. Pinkie proceeds to look through all his things in his wagon, annoying the donkey even further.

Having been denied Cranky's wagon, Pinkie brings out an actual welcome wagon. Cranky reluctantly lets her get on with her greeting. One brief song later, both of them end up covered in cake batter due to Pinkie mixing up the oven with the confetti cannon. The confetti knocks Cranky's toupee off, which lands on Pinkie. She immediately mistakes it for a spider and tramples it, further annoying Cranky. Seeking to fix her mistake, Pinkie climbs a flagpole and loudly begs everyone in the vicinity for a toupee, proclaiming Cranky's baldness and infuriating him even further. Saddened by his discontent, Pinkie drags him to a spa, and tops off the treatment with a gift: a new toupee designed by Rarity, which resembles the sea serpent's hairstyle from Friendship is Magic, Part 2 as well as the hair of Johnny Bravo. He thanks her for it, but fails to bust out a smile.

Later that day, as Cranky is busy unpacking his things at his new house, Pinkie drops by to see him and plays with a snow globe with a miniature Derpy inside. As they talk, Pinkie learns that Cranky has traveled all over Equestria, including Fillydelphia and Manehattan, looking for a 'special friend' whom Cranky lets slip to be a lady. Pinkie then discovers a scrapbook and flips through it, finding something that catches her eye. As she tries to ask Cranky about it, a series of mishaps sets the book on fire. She attempts to douse the flames, ruining the pages. Cranky is furious at Pinkie for ruining his scrapbook and throws her out, telling her that he will never be her friend.

After Cranky's rejection leaves Pinkie feeling dejected and sad, she goes to Twilight for some advice. Twilight and Rainbow Dash, who is reading a Daring Do book, explain that she just has to accept that Cranky wants to be left alone. Pinkie agrees and decides to leave him alone, but only after he accepts her apology. As she tries to apologize, Cranky flees her. She chases him around town trying everything to get him to accept her apology, but he refuses, saying that nothing she can do can replace the book, which was his only reminder of 'her'.

As Pinkie leaves in defeat, she is suddenly struck with an idea. Speaking through the door, Pinkie tells Cranky that there is still one more thing she wants to give him. He turns her down stubbornly, but after hearing a different voice in reply, he opens the door to see Matilda, the donkey Pinkie had greeted previously who turned out to be the special friend Cranky had been looking for. Pinkie explains that she figured it out from the items in Cranky's scrapbook: a flower, a ticket, and a menu from the Grand Galloping Gala, items she had also seen in a scrapbook owned by Matilda. Cranky reveals the story of meeting Matilda at the Gala. According to his story, he discovered that Matilda had disappeared when he entered her room the next day, and leaves without reading the note that Matilda had left behind. He then spent his life searching for her, and came to Ponyville to retire from his search. Matilda tells him that she has been living in Ponyville the whole time. They reunite and Matilda kisses him on the nose, causing Cranky to smile for the first time in years. Cranky gladly accepts Pinkie's apology and finally accepts her friendship. Pinkie literally turns into a rocket and explodes with joy, bouncing about rambling about everything she and Cranky can do together as friends. She calms down as Cranky tells her that he and Matilda just want some time to be together, but he assures Pinkie that the two of them are indeed friends.

As Pinkie leaves, she muses on her letter to Princess Celestia: While some friends may enjoy playing and laughing together, some may just like to be left alone, which is fine too. Whatever the case, one of the best things about friendship is being able to make one's friends smile. The episode ends with Pinkie singing Cranky Doodle Joy, interrupting Cranky and Matilda in front of an open window of Cranky's house. The credits play a piano arrangement of Yankee Doodle, making A Friend in Deed the second episode not to feature the instrumental arrangement of the show's theme song in its credits, the first being The Return of Harmony Part 2.

Pinkie Pie: Let's do this.

Pinkie Pie: I've never seen you before.
Cranky Doodle Donkey: Kid, you're smarter than you look.

Pinkie Pie: ...what just happened? Meet somepony new, check. Introduce myself, check. Sing random song outta nowhere, check. Become instant best friends... uncheck. I don't get it. How can somepony not become instant best friends with me? Was it something I said? Was it something I sang? This is no time for the blame game, Pinkie! There's somepony new in town, and you need to win him over! 'Try everything you can to make Cranky smile and be your friend'. Check!

Pinkie Pie: Oh, silly me! I must've put the confetti in the oven and the cake in the confetti cannon! Again! [giggles]

Pinkie Pie: [explodes like a firework] Woohoo! This is just fantastic! Ooh, now we can hang out together, and chat, and sing songs, and [gasps] party! Oh, I can throw you guys a big party! It'll be called a 'Welcome to Ponyville, I found my lost love, I'm BFF's with Pinkie Pie Party'! ...Or maybe something less over-the-top and not so super-hyper. 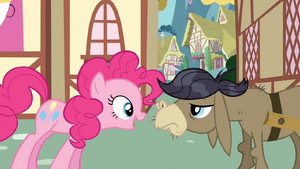 A Friend in Deed image gallery