A Health of Information

A Health of Information is the twentieth episode of season seven of My Little Pony Friendship is Magic and the one hundred and sixty-third overall. The title is a play on the expression "a wealth of information".

In this episode, Zecora comes down with Swamp Fever, a disease for which no cure has been discovered, and Fluttershy makes it her mission to heal her.

In production order, this episode is season 7, episode 18.

This episode was previously scheduled to premiere on Canada's Treehouse TV channel on June 17, 2017,[1] but was later replaced by a repeat of Parental Glideance.

The episode premiered on Russian television channel Carousel on September 18, 2017, five days prior to its scheduled airing on Discovery Family.

The scene when Fluttershy telling Twilight about her discovery of the Mystical Mask, and the scene of Fluttershy's first attempt at trying to get the flash-bees' honey both reappear in Memnagerie.

The episode begins at a swamp where Zecora helps Fluttershy collect crisscross moss for the Sweet Feather Sanctuary. During her moss collection, Zecora slips and falls into the swamp water, and she floats past a lilypad flower that sprays her with pollen. When Zecora emerges from the water, she suddenly finds herself covered in orange spots, much to Fluttershy's alarm.

Later, at Dr. Horse's office, Zecora has starting coughing up bubbles. After an examination, the doctor diagnoses Zecora with Swamp Fever, a rare disease characterized by orange spots, bubble-coughs, and shock-sneezes. In the disease's final stage, the victim transforms into a tree that drops the flowers that spread the disease. Even worse, no cure for Swamp Fever has been discovered.

Feeling guilty for getting Zecora sick, Fluttershy promises to find someone who can help. Zecora tells her about a legendary masked healer from long ago who cured many diseases before mysteriously vanishing without a trace. Fluttershy knows of the legend of this "Mystical Mask" from stories that her parents told her when she was little. Fluttershy and Zecora believe the Mystical Mask really exists, and Fluttershy is determined to seek her out.

The mage of the swamps

At the Castle of Friendship, Fluttershy interrupts a cooking competition between Twilight Sparkle and Spike and asks for help in learning more about the Mystical Mask. Unfortunately, after several hours of searching the castle library, Twilight and Fluttershy fail to find anything. Twilight suggests turning in for some well-needed sleep, but Fluttershy refuses to rest until Zecora is healed.

The next morning, Fluttershy excitedly wakes up Twilight and tells her that she has discovered the Mystical Mask's true identity: Mage Meadowbrook, the legendary sorceress of Hayseed Swamp who disappeared a long time ago. Fluttershy wants to head to the swamp to see if Meadowbrook left anything behind. Twilight mentions Fluttershy's lack of sleep, but Fluttershy still refuses to rest and urges Twilight out the door.

The legend of Meadowbrook

One of Meadowbrook's journals says that, after she perfected a cure for the sniffles, she was given her own healer's mask by her mother. One day, one of the villagers appeared on their doorstep with Swamp Fever. Using the flowers that spread the disease, Meadowbrook and her mother tried to make a cure but made little progress. Before long, the disease spread to the other villagers, including Meadowbrook's mother, leaving Meadowbrook to find a cure on her own.

While observing the flowers in the swamp, Meadowbrook noticed a swarm of flash bees collecting nectar from them, immune to their poison. Reasoning that the bees' honey contains the cure for Swamp Fever, Meadowbrook follows the swarm to their hive and tries to collect some. However, the overly protective swarm attacks Meadowbrook with their electrified stingers, preventing her from reaching the honey. Therefore, she put on her healer's mask and came up with a plan.

Meadowbrook eventually succeeded in retrieving the flash bees' honey and curing everyone in the village, though her journal doesn't say exactly how she accomplished it. In her final entries, she wrote that she would dedicate her life to curing ponies all over Equestria—which, according to Cattail, she did up until her disappearance.

With the information given by Meadowbrook's journal, Fluttershy decides to seek out the flash bee swarm and secure some of their honey for Zecora. However, Twilight and Cattail notice orange spots on Fluttershy's body, indicating she has also caught Swamp Fever. Fluttershy puts masks on Twilight and Cattail to keep them from getting infected and prepares to head to collect the honey. Twilight and Cattail urge her not to push herself and worsen her symptoms, but she is still determined to see her mission through and confident in her ability to reason with the bees.

Cattail leads Fluttershy to the flash bees' hive, and Fluttershy tries asking them for some of their honey, but they sting her in response. Fluttershy tries using the Stare on the bees, but they prove immune to it and sting her even more. After receiving the swarm's aggression, Fluttershy finally succumbs to her intense exhaustion and loses consciousness.

When Fluttershy reawakens in Meadowbrook's house, Twilight and Cattail reveal that she has been unconscious for three days and that Zecora's condition has worsened to the point where leaves have started growing on her body. Fluttershy is distraught about wasting so much time, and Twilight and Cattail say they have already tried everything they could to reach the honey. Just then, a flash bee flies into the room and starts to nuzzle Meadowbrook's mask affectionately.

"That's it! I know how Meadowbrook got the honey!"
— Fluttershy

Some time later, at Zecora's hut, a cured and fully-rested Fluttershy feeds the honey to Zecora, and she makes an instant recovery. Zecora thanks Fluttershy for the struggles she went through to cure her, but Fluttershy admits that she could've helped Zecora sooner if she listened to Twilight and didn't disregard her own health. Just then, Dr. Horse arrives with Swamp Fever symptoms and asks if Fluttershy found the cure.

Zecora: There we go. Now, that wasn't so tough. Fluttershy, tell me, will this be enough?
Fluttershy: Gee, I don't know. It's a pretty big pack. So maybe enough to fill up this sack? [gasps, laughs] Oh, my! You're rubbing off on me, Zecora!

Fluttershy: I can't believe a flower did this. I take back thinking it was pretty!

Dr. Horse: Unfortunately, very little is known about the disease. Except, of course, its symptoms – change of coat, coughing bubbles, shock sneezing, confusion, and the last stage, the afflicted turn into the very trees that drop the disease-spreading flower.

Zecora: There's a healer of legend who never would fail. But I only know her from ancient folktales. Mystical and masked, she came in the night and cured everything from hoof cough to fur blight. What became of the healer, nopony knows, for she disappeared ages and ages ago.
Fluttershy: The Mystical Mask! Of course!

Zecora: That's marvelous, Fluttershy. I am quite impressed. While you are gone on your journey, I'll try not to be... worried.
Fluttershy: [gasps] Oh, no. Zecora, you didn't rhyme! You must be getting worse.
Zecora: Oh. No, no, no, not at all. Something... something... ball?

Twilight Sparkle: Anypony who lives in a tree is okay by me.

Zecora: Ohhh, I do feel fine, and this honey is divine.
Fluttershy: Oh, you're rhyming again! Welcome back, my friend! 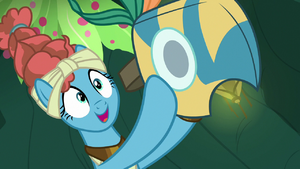 A Health of Information image gallery