A Hearth's Warming Tail is the eighth episode of season six of My Little Pony Friendship is Magic and the one hundred and twenty-fifth overall. The title and plot both reference Charles Dickens' A Christmas Carol.

The episode's premise was conceived on January 13, 2015. The outline was written on January 30. The script's first and second drafts were respectively written on March 3 and March 16. The final script was polished on March 27, approved on April 1 and locked on April 20.[1]

Hearth's Warming Eve Is Here Once Again was first previewed at the 2016 New York Toy Fair.[2]

In the original outline, the character of Jacob Marley was going to be portrayed by Discord; this was cut for time,[3][4] never making it far enough in the script that Jim Miller ever saw dialogue for him.[5] Also in the episode's original draft, the Spirit of Hearth's Warming Yet to Come did not have a song.[6]

The animation sequences for Hearth's Warming Eve Is Here Once Again, Say Goodbye to the Holiday, and Luna's Future were storyboarded by Sabrina Alberghetti.[7]

Daniel Ingram was nominated for a 2017 Leo Award for Best Musical Score in an Animation Program or Series for composing this episode's score and songs.[8]

The episode opens in Ponyville as ponies decorate the town and Castle of Friendship for Hearth's Warming while singing a merry tune. Fluttershy and Rainbow Dash oversee the delivery of snow clouds, Applejack distributes baked goods to everyone, Rarity makes decorative hats, and there is a general feeling of happiness all around.

Twilight Sparkle is excited for Starlight Glimmer to celebrate her first Hearth's Warming Eve in Ponyville. However, Starlight doesn't share her excitement and would rather skip the holiday. She considers the day no different from any other and "just an excuse for silly songs and fun".

When Twilight tries to explain the holiday's importance, Starlight says she already knows the story of how Earth ponies, Pegasi, and unicorns came together to vanquish the windigos. So Twilight decides to read her a different story: her favorite holiday story titled "A Hearth's Warming Tale".

A Hearth's Warming Tale tells the story of Snowfall Frost, a powerful yet bitter unicorn who hates Hearth's Warming Eve and values studying and magic above all else. She lives alone in her Canterlot home applying her knowledge to the betterment of Equestria, and her only company is her loyal assistant Snowdash.

Viewing Hearth's Warming as a "menace", Snowfall Frost doubts the holiday's origins and believes singing songs and being nice are a waste of time. After she unwittingly excuses Snowdash to leave early and enjoy the holiday with her friends, Snowfall voices her disgust and desire to skip Hearth's Warming altogether. As she sings Say Goodbye to the Holiday, Snowfall gathers some ingredients and prepares a magic spell to erase the holiday from existence.

The Seeds of the Past

When Starlight Glimmer questions Snowfall Frost's reasons for her actions, Twilight says they will find out what they are if they keep reading.

Just before Snowfall Frost casts her spell to erase Hearth's Warming Eve, her actions draw the attention of the Spirit of Hearth's Warming Past. The spirit expresses her opinions on Snowfall's spell by taking her on a trip back in time. She explains—through song—that every choice one makes in life has its consequences, no matter how small.

In the past, Snowfall sees her younger self, bright-eyed and happy to be celebrating Hearth's Warming Eve. However, when her magic instructor Professor Flintheart finds her decorating the classroom, he voices his displeasure. He tells Snowfall that if she wants to become a powerful unicorn, she must cast aside all notions of fun and focus solely on hard work and studying. Shaken by Flintheart's harsh truths, Snowfall takes his advice and changes her point of view, thus sowing the seeds that cause her to grow up to be the pony she is now.

Upon returning to her house, Snowfall is then visited upon by the Spirit of Hearth's Warming Presents, who explains to her the thoughtfulness that comes with exchanging gifts with others. She takes Snowfall on a tour through present-day Canterlot and shows her all the presents that the present has to offer.

At Snowdash's home, Snowfall sees a party being enjoyed by everyone in town. She also overhears Snowdash and her friends talking about her behind her back and criticizing her motives. As the ponies inside enjoy the party, the Spirit of Hearth's Warming Presents remarks to Snowfall that this is the last Hearth's Warming Eve party that Equestria ever has. Before Snowfall can ask what she means by this, the Spirit vanishes.

In this future in which Snowfall Frost succeeds in erasing Hearth's Warming Eve from existence, Equestria is blanketed in deep snow and plagued by windigos. Realizing the cold nightmare of a future that she could potentially create, Snowfall Frost finally understands the holiday's importance and pleads with the spirit that these events can yet be altered.

Snowfall is returned to her home once again, and she sees that there is still time to change the future. She goes to Snowdash's party bearing gifts and a new appreciation for Hearth's Warming Eve, and the ponies openly welcome her.

End of the story

Upon finishing the story, Twilight excuses herself to join the party downstairs and tells Starlight Glimmer that she can join if she wants to. A short while later, Starlight accepts Twilight's invitation and joins the party as well. Learning to let go of the past and enjoy the present, she leads the other ponies in a reprise of their song from earlier.

Twilight Sparkle: Hey, Starlight! Ready to celebrate your first Hearth's Warming Eve here in Ponyville?
Starlight Glimmer: I was thinking I might just skip it.
Twilight Sparkle and Spike: [gasp]

Twilight Sparkle: [narrating] It was said of Snowfall that she was almost as studied as Star Swirl the Bearded. Almost, since everypony knows that Star Swirl was an expert at everything from transfiguration, dimensional calibration, teleportation—
Spike: [narrating] We get it. Star Swirl's awesome.

Starlight Glimmer: Snowfall doesn't like Hearth's Warming Eve so she decides to cast a spell to get rid of it altogether? That seems a little extreme.
Spike: [muttering] Says the pony who tried to make everypony the same by replacing their cutie marks with equal signs.

Professor Flintheart: It's your choice. Spend your time learning to become a powerful unicorn or play with your toys and make nothing of yourself.

Starlight Glimmer: You know you're doing your Pinkie Pie voice, right?
Twilight Sparkle: I was not!

Starlight Glimmer: Windigos?! They aren't real! It's just a little filly's story!
Princess Luna: They are all too real, Snowfall, and your actions will allow them to return. The future of Equestria shall be bathed in a blanket of eternal snow! 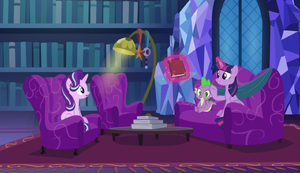