A Horse Shoe-In is the twentieth episode of season nine of My Little Pony Friendship is Magic and the show's two hundred and sixteenth episode overall.[1]

In this episode, Starlight Glimmer decides to hire a Vice Headmare in preparation to take over the School of Friendship from Twilight.

The episode begins at the School of Friendship, where Starlight Glimmer brightens her office with a philodendron plant and names it Phyllis. Twilight Sparkle and Spike enter the office; with Twilight about to take over Celestia and Luna's duties of ruling Equestria, she decides to enact her and Starlight's previously-discussed decision to have Starlight take over as the school's headmare. Though she is somewhat overwhelmed by the decision, Starlight happily accepts her new position.

Later, Trixie expresses that while she is proud of Starlight and her new position, she worries that the responsibilities that come with it will cut into their social time. Starlight explains that her taking over the school is very important, and she wants to get as much advice from Twilight as possible before Twilight moves to Canterlot. When Trixie brings up the fact that Twilight has always run the school alongside her friends, Starlight gets an idea.

"You can give good advice when you don't mean to."
— Starlight Glimmer to Trixie

In Twilight's office, Starlight asks Twilight if she can hire a vice headmare to help her run the school. Twilight gives her full support for the idea and wishes Starlight good luck in this task before leaving for a coronation gown fitting. Trixie, having overheard Starlight and Twilight from outside, believes the position of vice headmare is automatically hers. Starlight tries to convince her that she has to choose a vice headmare through a lengthy selection process, but Trixie assumes this is merely a formality before Starlight inevitably picks her.

Some time later, Starlight meets with several applicants for the position of vice headmare, including Trixie, Big McIntosh, Dr. Hooves, Octavia Melody, and Spoiled Rich. She explains to the applicants her three-stage interview process in which they will need to demonstrate the skills that a vice headmare requires. In the first stage, the applicants serve as substitute teachers for the school students. Big Mac, Octavia, and Dr. Hooves all receive the students' approval, but Spoiled Rich and Trixie's classes are met with dissatisfaction and boredom.

In her office, Starlight allows Big Mac, Octavia, and Dr. Hooves to move on to the next stage of her interview process, but Spoiled Rich is dismissed. She considers dismissing Trixie as well but decides to give her another chance out of a desire to have a friend be her vice headmare. Trixie suddenly enters and expresses how excited she is for her and Starlight to be working together, causing Starlight to feel even more pressure to keep her on as a potential candidate for vice headmare.

In the second stage of the interview process, Starlight tests the applicants' communication skills by having them meet with students' parents and guardians for parent/teacher conferences. Octavia and Dr. Hooves pass this stage as well, but Big Mac faces difficulty with his limited communication skills, and Trixie gets into an argument with Grampa Gruff when she sticks up for Gallus. After dismissing Big Mac from the interview process, Starlight admonishes Trixie for getting into an argument with Grampa Gruff and warns her to take things more seriously in the final stage. However, Trixie still believes Starlight will give her the position of vice headmare in the end, despite how well she performs.

The dangers of favoritism

In the final stage of the interview process, Starlight tasks the remaining applicants with organizing field trips for the students. Octavia passes this stage by performing music alongside DJ Pon-3 at the Ponyville Theater, but Dr. Hooves' field trip to his science lab fails to meet the students' expectations. Trixie's idea for a field trip involves teleporting a patch of Froggy Bottom Bogg directly into her classroom, but she accidentally endangers the students by bringing in a hive of flash bees.

After evacuating the students, Starlight teleports the hive away, but the classroom becomes a complete mess. Fed up with Trixie's failure in every stage of her interview process, Starlight angrily chews her out for not taking things seriously and for putting the students in danger, concluding that she will never be right for the job of vice headmare and calling her incompetent. Trixie, heartbroken by Starlight's words, leaves in tears.

Upon seeing Trixie leave, Twilight enters and magically fixes the damage to the classroom. When Starlight shares how much difficulty she is having in choosing a vice headmare and how much she wants to appoint a friend for the position, Twilight explains that not everyone is right for every job and that if one has a job to do, they will not always be able to work with a friend on it, no matter how much they want to. Starlight realizes her mistake in showing Trixie favoritism throughout the interview process and not being straightforward with her from the start.

Starlight goes to Trixie at her traveling caravan and apologizes for hurting her feelings and not being straightforward from the beginning that she was not qualified for the position of vice headmare. After Starlight's harsh words earlier, Trixie believes she would be of no help to Starlight in her new job as headmare. However, Starlight argues that Trixie still has something to contribute, having initially motivated Starlight to appoint a vice headmare in the first place and later standing up for Gallus.

Trixie admits her own mistake in assuming Starlight would give her the job, and with Dr. Hooves and Octavia having withdrawn their own applications, there are no other candidates for vice headmare. Wanting to help Starlight fill the position, Trixie suggests finding someone responsible, detail-oriented, and smart. To that end, she sends a letter to Sunburst. Since he does not have as many responsibilities as Flurry Heart's royal crystaller as he used to, Sunburst eagerly accepts the position of vice headmare at the School of Friendship.

Starlight thanks Trixie for her consideration of Sunburst for the job. Taking into account Trixie's hidden insightfulness, talent for giving advice, and thoughtful consideration of others, Starlight offers her a position as the school's new student counselor. Trixie accepts the position and immediately starts redecorating the office – to Starlight's dismay, this involves throwing her plant Phyllis in the garbage.

Spike: Uh, Twilight? Rarity says you were supposed to be at the boutique five minutes ago for your second fitting for the coronation gown.
Twilight Sparkle: Ugh. How many fittings are there gonna be?
Spike: A lot?

Dr. Hooves: I eagerly look forward to sharing my love of science with both progeny and progenitors!
Octavia Melody: Indeed. An orchestra is made up of different parts, and good communication is the key to harmony.
Big McIntosh: Eeyup.
Trixie: A lifetime on stage has taught me that good communication is essential to holding your audience's attention, which is why Trixie is also known as a great and powerful communicator!

Grampa Gruff: Gallus doesn't need to know I'm proud of him! And he certainly doesn't need me trekking all the way to Ponyville!
Trixie: Good! Because you're no longer welcome!
Grampa Gruff: Ohhhh! Well, fine with me!

Dr. Hooves: And three... four... five... Congratulations! You are now five seconds into the future! You see, we are all already time travelers! Hmm? Who's next?
Smolder: Uhhh, now what?
Dr. Hooves: Oh. I actually hadn't thought that much beyond this.

Twilight Sparkle: If you have a job to do, you have to decide what's best and be upfront and honest, even if that means you can't work with a friend on it.
Starlight Glimmer: So, I guess that means talking to them at the beginning instead of stringing them along until you get so frustrated you totally lose it and say a bunch of really awful things?
Twilight Sparkle: Pretty much.

Trixie: Starlight, obviously you'd like some help, and hiring a vice headmare is a great idea.
Starlight Glimmer: But who could it be?
Trixie: Well, you need somepony who's responsible like you and detail-oriented like Twilight. And... smart, obviously. It is a school after all.

Starlight Glimmer: "Friend" is perfect. But there's a position here at the school you might be right for, too. What would you say to being the School of Friendship's new student counselor?
Trixie: I'd say this office needs a bit of redecorating. Potted plants scream desperation.
[thud]
Starlight Glimmer: Phyllis, no! 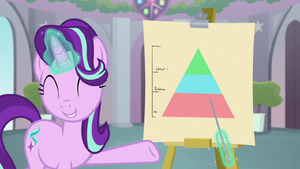