A Matter of Principals

A Matter of Principals is the fourteenth episode of season eight of My Little Pony Friendship is Magic and the one hundred and eighty-third overall. The title is a wordplay on the phrase "matter of principles".

When Twilight Sparkle leaves Starlight Glimmer in charge of the School of Friendship, Discord gets frustrated and does his best to make Starlight's role impossible.

This episode aired on July 29, 2018, on Boomerang in Australia,[1] six days ahead of its scheduled premiere on Discovery Family.

According to Nicole Dubuc, the original inspiration for this episode was Pride and Prejudice, and the story was changed during the notes process.[2][3]

The episode begins with Twilight Sparkle showing her students at the School of Friendship a collection of valuable artifacts and treasures that were donated to the school from other cultures. She explains that the students are going to learn about the artifacts during a "Spell-venger Hunt"—a magical scavenger hunt—that she has organized, the winner of which will win a tour of the Canterlot Archives with Princess Celestia.

However, before Twilight can pick the teams for the Spell-venger Hunt, her cutie mark starts to glow, indicating that she is being called by the Cutie Map for a friendship mission. She goes to the Castle of Friendship throne room and discovers all of her friends have been called by the map as well—and to a very distant location. With all of the school's teachers being called away, Twilight tasks Starlight Glimmer with acting as the interim headmare in their absence. Starlight is unsure about being given such a large responsibility, but Twilight has faith in her leadership skills, and she leaves Starlight with her meticulous curriculum plans and Spike to assist her.

On her first day as temporary headmare, Starlight finds that Discord arrived before her and chaotically redecorated her office, prepared to take over in Starlight's place. Starlight declines Discord's help, but Discord has already hired several substitute teachers to fill in for the Mane Six's classes: Iron Will, Cranky Doodle Donkey, and a dragonsneeze tree. Unfortunately, Discord's choices for substitute teachers prove utterly ineffective at teaching friendship.

As Discord aggravates Starlight on her inability to run a school, Starlight tells him to leave before his "assistance" causes any more trouble. Discord leaves, but Spike warns Starlight that Discord is merely testing Starlight and will likely not back off, even when commanded to. Nevertheless, Starlight resolves to run the School of Friendship properly and keep her promise to Twilight.

The next day, Starlight brings in a new group of substitute teachers to help her teach classes—Trixie, Spitfire, and Maud Pie—and reminds the students about the Spell-venger Hunt scheduled for later that day. As Trixie teaches the school students about the friendship element of magic, Discord—pretending to be a student himself—interrupts the lesson with rude phone calls and sabotages Trixie's magic act by causing her to pull an ursa major out of her hat.

Discord causes a similar disruption by summoning a bugbear to chase the students during P.E. When Yona nearly gets hurt during Discord's lesson, Starlight Glimmer intervenes and angrily scolds him for endangering students and trying to sabotage her headmare duties. However, Discord continues to antagonize Starlight and openly questions her capabilities, and in a fit of frustration, Starlight magically banishes him from the school grounds. Starlight begins to question her own abilities as headmare and wonders why her being in charge upsets Discord so much.

Later that day, the Spell-venger Hunt begins, and Starlight explains the game's rules and splits the students up into teams of two. As the students split up to locate the cultural artifacts and treasures hidden around the school, Starlight and Spike go to the observatory to watch from above. Ocellus and Smolder find the Helm of Yksler mounted on a pony suit of armor, but the armor suddenly comes to life and attacks them.

Elsewhere, Gallus and Silverstream find the Crown of King Grover behind a painting in the library, but all of the paintings come to life and attack the students as well. As she watches this, Starlight quickly deduces Discord to be the cause, explaining to Spike that she only banished Discord's physical form from the school and that Discord is still able to cause trouble in ghost form. Spike wonders how they are going to stop Discord if magic failed to stop him, and Starlight says she isn't going to use magic this time.

As Discord menaces more students with his ghostly mischief, the school erupts into chaos as the students start to believe it is haunted. When Starlight and Spike arrive and reveal Discord to be causing trouble again, Discord appears with all of the artifacts from the Spell-venger Hunt. When he refuses to stop causing trouble for Starlight, Starlight unbanishes his physical form from the school. Thinking as a guidance counselor instead of a headmare, she apologizes for making him feel left out of the school activities and offers him the position of vice headmare, which he eagerly accepts. With peace made between the two, Discord helps set everything back up for the Spell-venger Hunt.

The Mane Six return from their trip and reveal that Discord cast a spell on their cutie marks that sent them on a fake friendship mission. Twilight thanks Starlight for looking after the school while they were gone, and Discord is disappointed that he's no longer the vice headmare.

Silverstream: [excited squeal] Learning and fun?! Does it get any better than that?!
Gallus: You've been underwater a long time, haven't you?

Spike: Eh, being a princess for Twilight was hard enough.
Starlight Glimmer: I'm gonna pretend that made sense.

Starlight Glimmer: This is your first time at our new school, isn't it?
Discord 1: Oh, was I not invited to the grand opening?
Discord 2: Friends and Family Day?
Discord 3: Baccalaureate?
All three Discords: I hadn't noticed.

Yona: [clears throat, quietly] Be my friend.
Iron Will: If you're quiet, I don't buy it!
Yona: [louder] Be my friend!
Iron Will: I've heard pudding that's more convincing!
Yona: [huffs, even louder] Be! My! Friend!

Starlight Glimmer: You hired a tree as a teacher?!
Discord: Its schedule was free.

Spike: What's your problem?
Discord: My problem? How is the fact that Twilight decided to put an incompetent, power-hungry unicorn in charge of her school my problem?!

Silverstream: You paid attention in class!
Gallus: What?!

Starlight Glimmer: Nopony ever invited you to the school. And when you offered to help, I didn't listen. I was so worried about doing things Twilight's way, I didn't stop to think about being a good friend. I'd like to apologize for that. And offer you the job of vice headmare.
Spike: Huh?
Silverstream: Really?!
Gallus: What?!
Ocellus: Why?!
Yona: No!
Smolder: Him?!
Sandbar: Totally confused.

Rarity: A glamour spell on our cutie marks?
Rainbow Dash: A fake summons from the map?
Pinkie Pie: Hey, at least we got to go spelunking in that really creepy cave with all those eyeless worm creatures chasing us. 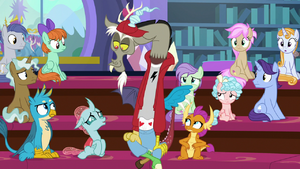 A Matter of Principals image gallery