A Rockhoof and a Hard Place

A Rockhoof and a Hard Place is the twenty-first episode of season eight of My Little Pony Friendship is Magic and the one hundred and ninetieth overall. The episode title is a play on the expression "between a rock and a hard place".

When Rockhoof, one of the Pillars of Old Equestria, has trouble fitting into the modern world, Twilight Sparkle and her friends try to help him find a new purpose.

This episode was released on France's TFOU MAX on-demand service on August 15, 2018,[1] thirty-one days ahead of its scheduled premiere on Discovery Family. It is also aired on Nickelodeon in Denmark, Norway and Sweden on August 22, 2018, and on Boomerang in Australia on August 25, 2018.

A relic out of time

The episode begins on the island home of Rockhoof, one of the legendary Pillars of Old Equestria. Rockhoof himself is assisting with the digging efforts of Professor Fossil and her archaeological team. However, his brute methods of unearthing old artifacts threatens to damage or destroy them, clashing with the rest of the team's methods of careful and meticulous preservation.

Before Rockhoof's digging methods endanger more artifacts, Professor Fossil brings him to the School of Friendship in Ponyville and explains to Twilight Sparkle that Rockhoof is not a good fit for her archaeological team. Twilight is thrilled to have one of the legendary Pillars on the school's staff, and she soon introduces him to her friends and students. Likewise, Rockhoof is delighted to have finally found a place in the modern world where he fits in.

Later, the students' classes start, and Yona is particularly excited to learn from Rockhoof, admiring his yak-like size and strength. When Rockhoof appears, crashing through the classroom door, he tries to get himself up to speed on Twilight's lesson plan before he starts teaching. Ocellus explains that the class just finished studying about the first time Discord was imprisoned in stone, and Rockhoof believes the class to be about telling stories.

Rockhoof starts telling the class a story of how he once fought an ursa major single-handedly, jumping around the classroom, swinging his shovel, and crashing into things as he reenacts the tale. As Twilight walks through the school halls with Applejack, they hear Rockhoof smash up his classroom as he tells his story. Twilight interrupts the destructive storytelling and brings Rockhoof out to the school's fountain square. She and Applejack tell him that while they understand his troubles fitting in modern places, he needs to tone down the destructive elements of his teaching.

Just then, what appears to be a raging fire breaks out in a nearby classroom. Springing into action, Rockhoof evacuates the students nearest to the flames and shatters the water fountain in order to redirect the water and put the fire out. However, it is revealed that Spike and Smolder were just having a fire-breathing contest, and Rarity angrily chews Rockhoof out for ruining the quilts that she and her students made. Ashamed for once again acting recklessly and failing to fit in, Rockhoof apologizes and leaves his teaching position.

Finding a place for Rockhoof

Twilight and her friends try to find Rockhoof a suitable job as a mail courier, spa masseuse, and assistant for Zecora, but these all result in similar failure. They decide to turn to the other Pillars of Old Equestria for help and see how well they have adjusted to their new lives in the modern world.

In Canterlot, Flash Magnus is the new drill sergeant for Princess Celestia's royal guards. In the Crystal Empire, Mistmane is the royal landscape artist for Princess Cadance and Prince Shining Armor. In her village home in Southern Equestria, Somnambula is a motivational speaker and meditation guru. In the Hayseed Swamp, Mage Meadowbrook sells potions and remedies out of her home/health clinic. Even Stygian has found moderate success as a best-selling novelist. Seeing how well his old friends have adjusted to living in modern-day Equestria, Rockhoof feels more miserable and out of place than ever.

Rainbow Dash suggests finding Rockhoof a job that caters to his experiences as a hero, and the Mane Six get him a job in General Seaspray's Hippogriff navy. When Seaspray's ship runs into thick fog, Rockhoof attempts to navigate the ship using the stars in the sky to guide it. However, due to the stars' positions being different than they were in his time, Rockhoof accidentally steers the ship to crash on the shore. Unable to serve as an efficient navigator, Rockhoof is dismissed from Seaspray's navy.

I belong in a museum

Back in Ponyville, with all of his attempts to fit into the modern world having ended in failure, Rockhoof gives up all hope. Remembering the story of Discord's defeat from earlier, he tells Twilight to turn him to stone, deciding that his only use in modern times is as a statue in a museum. Twilight vehemently refuses to carry out Rockhoof's request, but Rockhoof begs her, wanting to be remembered as the hero he used to be rather than the disappointment he is now.

Twilight tells Spike to take over teaching her classes while she thinks of an alternate solution. As the Young Six express their awe and admiration of Rockhoof in class, Spike enters and informs them that Rockhoof will no longer be teaching them and might soon be turned to stone. Yona is completely shaken by this information, and before the students can ask why, Spike gives them their assignment of writing an essay about heroism.

At the Castle of Friendship, Rockhoof tries to decide on his statue pose when Yona bursts in. She begs him not to let himself be turned to stone, but Rockhoof says his old stories are not worth much in the modern world. Yona reads Rockhoof the essay she wrote for class, stating she also did not fit in when she first came to Ponyville but has since made close friends. She also tells Rockhoof how much she deeply admires him and wants to be like him when she grows up. After hearing Yona's essay, Rockhoof decides to finish the story he was telling in class, and Yona reveals that the entire school wants to hear it.

When Twilight returns, prepared to carry out Rockhoof's request to be turned to stone, she finds him telling the school students the rest of the story of his confrontation with an ursa major. When he finishes the story, the students excitedly want to hear more, but Rockhoof says no, ready to be turned to stone. Before Twilight can do so, however, she points out that telling stories is the one thing that Rockhoof is good at doing in the modern world.

To that end, Twilight appoints Rockhoof as Equestria's official keeper of tales. As a living record of its history, she states that Rockhoof's stories could teach and inspire future generations. Rockhoof is still unsure that he will ever truly belong in the modern world, but Yona echoes Twilight's sentiment, stating that Rockhoof belongs just by being her friend. With a renewed sense of purpose, Rockhoof continues to tell stories to the students.

Rockhoof: That's what this is for.
Professor Fossil: Maybe in the past. [blows] Now it belongs in a museum. Safe. Preserved. Untouched.

Rockhoof: I know I'm new to your world, but there's one thing I learned when I saved my village from a rushing river of hot lava. There's nothing you can't do with hard work. And a shovel!

Twilight Sparkle: Our school is about finding your own special way to teach.
Applejack: And we can already tell you're a... smash with the class. [chuckles]
Twilight Sparkle: But maybe you could do a little less smashing in the classroom?

Rockhoof: Professor Fossil made it clear I'm not welcome back in my old village. Seems I don't belong here either.

Rockhoof: [yelling] Do you know where I can find Cranky Doodle Donkey?! I need to deliver his medicine! He has a rash in a very embarrassing place!

Rockhoof: I can't do my old job like Flash. Or adapt like Mistmane. Or succeed at something new like Somnambula. Or go home, like you.
Mage Meabowbrook: Give it time. Even Star Swirl's still learnin' about friendship.

Seaspray: I know how hard it is to adapt to a new home. After our many years below the waves, land customs seemed strange.
Rockhoof: Like you didn't fit in, no matter how hard you tried?
Seaspray: As though the world had moved on without us. Never fear, Rockhoof. We shall be as brothers in this bright future above the waves.

Rockhoof: I heard there's a statue spell that sends creatures into stone sleep. I want you to cast it. On me.

Twilight Sparkle: Why would you want to be turned into stone?
Rockhoof: Because I'm a relic of a bygone age. I belong in a museum. Safe. Preserved. Untouched. I don't belong in this time. 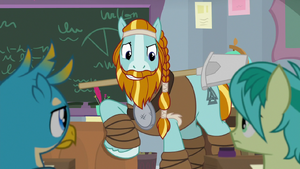 A Rockhoof and a Hard Place image gallery