A Royal Problem is the tenth episode of season seven of My Little Pony Friendship is Magic and the one hundred and fifty-third overall.

In this episode, Starlight Glimmer is sent by the Cutie Map to solve a friendship problem between Princess Celestia and Princess Luna, which she attempts to do by impulsively switching their cutie marks.

This episode aired on Canada's Treehouse TV channel on May 20, 2017, three weeks ahead of its scheduled premiere on Discovery Family.[1]

For her performance as Princess Celestia/Daybreaker in this episode, Nicole Oliver was nominated for a 2017 UBCP/ACTRA Award for Best Voice.[2]

The episode begins at the Castle of Friendship, where the Cutie Map is summoning Starlight Glimmer to Canterlot, to Starlight's delight and Twilight Sparkle's complete shock. Even more surprising is that the Map is summoning Starlight alone instead of two ponies as it had previously done. Twilight believes the friendship problem Starlight is being called to solve is minor, but Spike suggests the possibility of it being between the royal sisters Princess Celestia and Princess Luna.

At Canterlot Castle, Starlight meets with Celestia and Luna; while Celestia welcomes Starlight happily, Luna appears bitter about something.

In Starlight Glimmer's castle suite, Twilight appears before her in the form of a ballerina music box and asks about the situation. Starlight explains that the friendship problem is indeed between Celestia and Luna and that there is an unspoken tension between them. Unable to help Starlight due to the Cutie Map not summoning her, Twilight offers her consultation if she needs it.

The next morning, Starlight joins Celestia for a pancake breakfast in the castle dining hall. However, a sleepy and irritable Luna enters to pick up a pineapple and quickly excuses herself—behavior which, according to Celestia, she exhibits every morning. Later that evening, Starlight joins Luna as she puts up lavender flowers to help ponies in the castle sleep soundly. But as Celestia walks past laughing with dignitaries, Luna feels her sister is unappreciative of her efforts.

Starlight explains the situation to Twilight and says she plans to confront the princesses directly about her lack of communication. Twilight warns Starlight, however, that the last time the sisters fought, Luna turned into Nightmare Moon and Celestia had to banish her for a thousand years.

The following morning, Starlight and Celestia share a pancake breakfast again, and like the previous morning, Luna quickly enters only for food and attempts to leave. This time, Starlight confronts the two sisters about their respective lack of appreciation for the other's efforts. Celestia and Luna try to talk about their problem, but it quickly turns into an argument over whose royal duties are more difficult.

In an effort to stop their arguing, Starlight Glimmer uses her magic to switch their cutie marks for twenty-four hours. The princesses are angered at first, but Starlight sees this as an opportunity for them to trade places and learn to appreciate the burden of each other's daily duties. Begrudgingly, Celestia and Luna agree. When Starlight informs Twilight of this development, she hyperventilates.

A mile in her horseshoes

Later that day, Luna sees to Celestia's checklist of royal duties, many of which involve public appearances and smiling uncomfortably to her subjects. During a photo-op at a School for Gifted Unicorns fundraiser, the photographer takes Luna's picture right when her cheeks are so sore that she stops smiling. This causes her to get discredited in the newspaper and the fundraiser to fail. After meeting with some delegates and failing to dispel rumors of timberwolves occupying the White Tail Woods, Luna starts to understand Celestia's daily routine of dealing with many ponies at once. After addressing a three-hour-long dispute between the mayors of Fillydelphia and Baltimare, an exhausted Luna turns in for the day.

That night, after everyone in Equestria has gone to sleep, Celestia sees to Luna's royal duties; the solitude of being the only pony awake causes her to start talking to herself. With Luna's magic, Celestia travels to the dreamscape to observe ponies' dreams and relieve them of their nightmares. She finds Starlight Glimmer having a nightmare, doubting her own decision to switch Celestia and Luna's cutie marks and causing them to drift even further apart. She fears her inability to solve their friendship problem will cause Nightmare Moon to return, and Nightmare Moon herself suddenly appears.

Daybreaker tries to make Celestia doubt her relationship with Luna, and she fights against Nightmare Moon. With Celestia and Starlight caught in the middle, Starlight fears she has doomed Equestria. Using the power of the dream world, Celestia observes Luna's nightmare, in which she fears causing further sadness to the school foals. Celestia appears to pull Luna out of her nightmare and into Starlight's, where Luna witnesses the struggle between Nightmare Moon and Daybreaker.

As Starlight continues to despair, Luna tells Celestia that it is up to her alone to stop the nightmare. Celestia doubts herself, admitting that Luna's responsibility and burden are much harder than her own. Luna admits the same about Celestia's responsibilities and provides her support. With her sister's faith and trust, Celestia intervenes in Nightmare Moon and Daybreaker's conflict, eventually succeeding in dispelling the nightmare visions.

The next morning, Luna offers her own pancake breakfast to Celestia—albeit poorly made—and the two sisters reconcile over their previous disagreements with a better appreciation of each other's duties. As Starlight Glimmer joins them, they commend her for having the boldness to do what she did. The effects of the cutie mark switching spell wear off, returning Celestia and Luna's cutie marks to normal, and Starlight's own cutie mark starts to glow, signifying a successful Cutie Map mission.

Suddenly, a hyperactive Twilight appears to congratulate Starlight and asks for a detailed summary of events. Luna informs Celestia about the School for Gifted Unicorns and timberwolf-related incidents from the day before and quickly leaves for bed before Celestia can react.

Starlight Glimmer: [referring to Celestia] She's your mentor. I think you might be biased.
Twilight Sparkle: Fair enough.

Princess Luna: Is that what exhausts you? Smiling and being adored by everypony?
Princess Celestia: And you have it so much worse, do you?! You've spent your evenings flitting around giving ponies lovely dreams! Oh, it sounds just awful!

Princess Luna: [shouting] Hello! Great news! There are no timberwolves!

Princess Luna: Normally, I have all the time in solitude I need to work through my problems at my own pace.
Starlight Glimmer: Well, your sister doesn't get that luxury.

Daybreaker: If Luna can turn into Nightmare Moon, you can absolutely turn into me — Daybreaker! The better, prettier, and more powerful version of you!

Nightmare Moon: You can't get rid of me so easily, sister! Unless you plan on smiling me to smithereens!

Daybreaker: Ugh. So much black. We get it. You're sad.

Princess Celestia: Oh, Luna, I can't do this! I was wrong! Your job is so incredibly hard! You have to battle nightmares and work in the darkness and do it all alone! It takes such a brave, strong pony to do what you do!
Princess Luna: And that pony is you. I walked a day in your shoes. I thought all you had to do was smile and be adored all the time, but I was wrong. There is so much more to it than that.

Daybreaker: You can't destroy me! I'm everything you want to be!
Princess Celestia: No, you're not! You are not real, and you will never exist again!

Princess Luna: So, um, did you talk to yourself?
Princess Celestia: Um, a little. 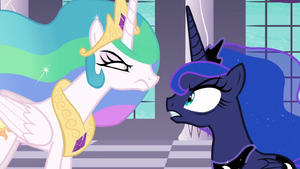 Retrieved from "https://mlp.fandom.com/wiki/A_Royal_Problem?oldid=2189563"
Community content is available under CC-BY-SA unless otherwise noted.