A Trivial Pursuit, incorrectly titled as A Trivial Problem by some sources, is the sixteenth episode of season nine of My Little Pony Friendship is Magic and the show's two hundred and twelfth episode overall.[1] The title is a reference to the Hasbro board game Trivial Pursuit.

In this episode, Twilight's hopes of keeping her Trivia Trot winning streak alive are waylaid when she is paired up with Pinkie Pie, who has never been to a trivia night before.

This episode was released on Youku's on-demand service in China[2] on July 5, 2019, forty-three days ahead of its scheduled premiere on Discovery Family. It was also released on iTunes on August 11, 2019.

At the Castle of Friendship, Twilight Sparkle is so excited for Trivia Trot—a competitive game of trivia questions and answers—the next day, as well as the thought of her third consecutive Trivia Trot victory, that she only communicates with Spike in the form of trivia answers in order to "stay in the zone". The next day, Spike accompanies Twilight to the Hay Burger restaurant where Trivia Trot is being held, and Twilight goes into extensive detail on the game's rules.

Inside the restaurant, multiple ponies have appeared to participate in Trivia Trot, some of whom are long-time participants—including Applejack, Rainbow Dash, Sunburst, Fluttershy, Maud Pie, and Mudbriar—and Twilight has compiled data on each of their trivia strengths and weaknesses in anticipation of being partnered with one of them. However, Pinkie Pie, who has never participated before, also shows up to participate, causing Twilight to panic at the possibility of being partnered with her and her Trivia Trot winning streak being jeopardized.

Trivia Trot hostess Granny Smith selects the game's teams—Sunburst with Cranky Doodle Donkey, Applejack with Dr. Hooves, Rainbow Dash with Matilda, Fluttershy with Bulk Biceps, and Maud Pie with Mudbriar—leaving Twilight to be paired with Pinkie Pie. Despite Twilight's concerns about her winning streak, Pinkie is happy and excited just to play as her partner. Spike also volunteers to keep score during the game.

In pursuit of victory

As the game gets underway, Pinkie Pie immediately starts giving incorrect answers, causing her and Twilight to fall to last place. Twilight tries her best to pick up the slack, but Pinkie serves as a constant distraction with her fidgeting, growling stomach, and overall inattentiveness. During the snacks/bathroom break, Twilight confides in Spike that Pinkie is holding her back from getting her third consecutive win, but she does not want to hurt Pinkie's feelings.

Spike suggests that Twilight focus on herself rather than Pinkie, but Twilight decides to focus on the other teams instead. When the game resumes, Twilight focuses less on answering questions and more on getting the other teams deducted points or penalized for breaking the rules. As a result of Twilight's strict enforcement of the rules, Sunburst is disqualified from the game when Cranky is caught sleeping. In addition, she refuses to let Pinkie attempt to answer any questions, even those Pinkie knows the answers to.

As the game progresses, Twilight perceives Pinkie Pie as more and more of a hindrance to her winning the game, and she sees the much more knowledgeable Sunburst as a potential replacement. Twilight tricks Pinkie into breaking the rules and getting herself disqualified from the game. With both of their teammates disqualified, Twilight and Sunburst form a new team together, much to Pinkie's disappointment.

Noticing Twilight's frazzled state, Sunburst takes over answering all the following questions and refuses to let Twilight answer any, just like how Twilight treated Pinkie Pie earlier. This causes tension between the two, and Sunburst—not wanting to let his correct-answer percentage drop any lower—tries to trick Twilight into getting herself disqualified. Twilight quickly catches on, however, and chastises Sunburst for trying to trick her. When Sunburst apologizes for the deception, Twilight feels guilty for doing the same thing to Pinkie.

As Sunburst teams up again with the now awake Cranky Doodle, Twilight apologizes to Pinkie Pie for letting her obsession with winning get the best of her. Pinkie adds that even if she did not know the answer to every question, they still could have had fun together. Twilight decides to forget about her third consecutive win and offers to let Pinkie be her partner again, even if it means resetting their current score to zero.

Pinkie Pie: Doesn't starting from zero mean we'll lose?
Twilight Sparkle: Well, our chances aren't good. But the odds of having fun on Team Twi-Pie are one hundred percent!

Granny Smith: Now, the first order of business is we need somepony to keep score.
Spike: I'll do it!
Applejack: [laughs] I'm not sure you wanna take that job, Spike. The score-keepin' can get a mite intense.
Sunburst: Yeah. Starlight used to do it, but now... Well, I can't even say the word "trivia" around her.
Granny Smith: [scoffs] Apple mash. Don't let them scare ya. You'll be fine. Now, let the games begin!

Pinkie Pie: Sorry. I didn't know we could have negative points.
Twilight Sparkle: It's fine, Pinkie. But maybe it'll help our chances if I coach you as we go. Tip one – try sitting still.
Pinkie Pie: Can do, Coach Twilight—
Twilight Sparkle: And don't get distracted. Or be distracting. Oh, and remember to listen carefully. Also, it's best to keep quiet between questions.
Pinkie Pie: Got it.

Granny Smith: The next category is "Apples"!
Rainbow Dash: Rigged!
Applejack: I didn't hear you complain when the category was "Wonderbolt History".
Rainbow Dash: But... [stutters] that-that's totally different!

Granny Smith: Which variety of apple only blooms for five days?
Rainbow Dash: [coughs] Don't choke. [whistles]
Applejack: Now, why would I choke on a question about apples? Uh... What was the question again?
Granny Smith: You kiddin' me?

Spike: Maybe instead of focusing on Pinkie, you should just focus on how you're playing.
Twilight Sparkle: Or... I should look at how everypony else is playing.

Granny Smith: The category is "Sticks and Stones".
Twilight Sparkle: [brays] I don't know anything about those! That's not any kind of category!
Mudbriar: Technically, it's a kind of category where we know the answers and you don't.

Granny Smith: What kind of stone can be used to start a fire?
[bell rings]
Pinkie Pie: The black one!
Maud Pie: The answer is flint.
Pinkie Pie: Yeah, that one! We both get points, right?
Sunburst: Sorry, Pinkie. Rule four – answers must be specific and exact. I'd help you if I could. I know this category pretty well.

Twilight Sparkle: Oh, we're gonna crush this round!
Sunburst: I don't know, Twilight. You seem out of the zone today. But don't worry. I can pick up the slack.
Twilight Sparkle: What?! I am the reigning Trot champ! If there's any slack that needs picking, I'll be the up! I mean, wait...

Twilight Sparkle: According to rule thirteen point two, players can join the game at any time, provided they start from zero.
Pinkie Pie: Wow. These rules are really convoluted. 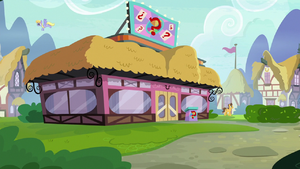