For the parrot named Ace, see List of non-pony characters#Ace.

Ace Point, or simply Ace, is a male Earth pony introduced in Call of the Cutie who has been identified as the fourth best tennis player in Equestria. He has a light tan coat, brown mane and tail, dark blue eyes, and a cutie mark of a tennis racket. He is unnamed in the show, but he is named in merchandise and other media.

On March 31, 2011, art director Ridd Sorensen stated regarding his designing of Ace Point that Call of the Cutie's "script called for a rather unimpressed 'Tennis Pony', so [he] thought it'd be funny to go in a 70's/Royal Tenenbaums kinda direction" and that "[t]he original version [...] had chest hair that was deemed too 'human like', so [he] changed it to fur."[3] Part of Ace Point's name was previously used[4] for a G1 Earth pony boy and has since been used for a parrot. Ace Point being the fourth best tennis player in Equestria was stated by Ridd Sorensen​[​citation needed​]​ before Top Trumps. Ace Point's cutie mark, hidden by clothing, was stated by Ridd Sorensen in early April 2011 to be "TENNNIS" balls[5][6] and in late May 2011 to be a picture of Ace Point punching a shark,[7]​[​dubious – discuss‍​]​ but has since been pictured on a collector card as being a tennis racket.

In season one, Ace Point appears in Call of the Cutie. After Apple Bloom uses his tennis racket to demonstrate the different uses of apples, Ace Point retrieves the racket and angrily asks who has been using it.

In season two, Ace Point appears in Luna Eclipsed. He goes out on Nightmare Night in his usual tennis-playing attire. He appears in the town square bobbing for apples with Lemon Hearts and Golden Harvest.

In season four, Ace Point appears in Simple Ways. He appears in the background during Mayor Mare's announcement of Rarity as the Pony of Ceremonies for the Ponyville Days festival.

In season five, Ace Point appears in Slice of Life, picked up by DJ Pon-3's mobile DJ station on her way to Cranky Doodle Donkey and Matilda's wedding.

Ace Point is a playable character in Gameloft's mobile game under the name "Ace". His in-game description states "Sporting one of Equestria's most famous moustaches, there's no social function Ace can't face!"

A mini-figure toy and collector card of Ace Point are to be released as part of the seventeenth wave of mystery packs.​[​specify​]​

In Enterplay's collectible card game, card α #27 R of Coco Crusoe attributes to Ace the quote "Yow! That pony doesn't know his own strength..." and Absolute Discord expansion set card #29 R of Ace names him with a trademark symbol and lists the quote "After years of chasing a tennis ball back and forth across the court, you kinda get used to it." Top Trumps card of Ace names him and gives him the description "A Stallion, Earth pony Ace is the fourth best tennis player in Equestria. His racket is his prized possession, so Apple Bloom is not popular when she gets it covered in apple mush!"

"Hey! Who's been using my racket?"
— Call of the Cutie

"After years of chasing a tennis ball back and forth across the court, you kinda get used to it."
— Enterplay collectible card game Absolute Discord #29 R card of Ace 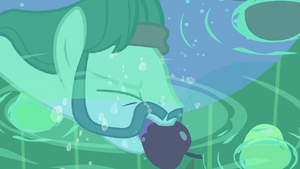