Start a Wiki
Adagio Dazzle is a female siren and one of the main antagonists in My Little Pony Equestria Girls: Rainbow Rocks. She is the lead singer of her band the Dazzlings, rivaling the Rainbooms.

In late January 2014, Meghan McCarthy was asked regarding DJ Pon-3 "Is Vinyl Scratch's canon name really Adagio Dazzle?" and answered "Nope."[5] In early April 2014, Michael Vogel stated that "Adagio is AWESOME."[6] Her cutie mark varies across depictions, but it always includes at least one gem.

Like those of her bandmates Sonata Dusk and Aria Blaze, Adagio Dazzle's wings are translucent and non-feathered. In the commentary, McCarthy notes that the wings resemble the fins of their siren counterparts. Her non-siren forms resemble "Tropical Dream", and her human form also resembles "Golden Hazel".

In music terms, the word "adagio" is a tempo marking indicating that music is to be played slowly.

The Dazzlings, including Adagio Dazzle, Sonata Dusk, and Aria Blaze, appear in Rainbow Rocks as the main antagonists.

In the film, Adagio and the other Dazzlings are introduced in the human world. They are sirens from Equestria who were banished to the human world by Star Swirl the Bearded to prevent them from using their dark magic to conquer Equestria. They are first seen in a café causing tension between the patrons when they witness the Equestrian magic that brought Sunset Shimmer to her downfall in the first film. Some time later, the reformed Sunset gives a tour of the school to Adagio and the other Dazzlings and tries to be friendly, but she gets suspicious when Sonata randomly blurts out that they sing to "get people to do what [they] want" and Adagio gets defensive over her pendant. Soon after, they convince all of the students except the Rainbooms and Sunset with their music to turn the friendly Musical Showcase into an all-out Battle of the Bands.

Adagio and the Dazzlings use their siren's songs to control student opinion and advance through the competition bracket. When the only bands between them and first place are the Rainbooms and Trixie and the Illusions, Adagio manipulates Trixie into removing the Rainbooms from the competition entirely. In the final battle against the Rainbooms, Adagio and the Dazzlings are eventually defeated, and the gem pendants with which they controlled the students are destroyed. As a result, their inability to sing leads to them being chased off in disgrace.

Aside from flashbacks, Adagio's true form is never physically shown in the film, but she and her fellow band members gain pony-like ears, extended ponytails, and translucent fin-like wings. They also summon astral projections of their true siren forms from their pendants.

A drawing of Adagio's siren form is briefly seen in Friendship Games during the CHS Rally Song, with purple fins. Her siren form is in one of the human Twilight Sparkle's photos.

Adagio Dazzle, alongside Aria Blaze and Sonata Dusk, make their return in the music video Find the Magic, performing at the Starswirled Music Festival and singing about adjusting to life without their magic.

Adagio and the rest of the Dazzlings return in Sunset's Backstage Pass as performers for the Starswirled Music Festival singing Find the Magic, and as suspects to who has been causing the time loop. When Sunset Shimmer checks their van only to not find the Time Twirler and after reading Adagio's mind, Sunset finds out that they weren't responsible. Adagio says that they paid the price after manipulating Canterlot High and that they get do-overs every single day called "living life", and they continue to harass Sunset before she accidentally hurts Pinkie Pie's feelings, telling Sunset that she needs to change, and finally driving off.

Adagio is mentioned by Pinkie Pie at the start of the "Saving Pinkie's Pie" short.

In the season seven episode Shadow Play - Part 2, Adagio and her fellow sirens appear in flashback, creating discord among ponies with their singing, before they were defeated by the Pillars of Old Equestria and banished by Star Swirl the Bearded.

Adagio appears alongside Aria and Sonata in their siren forms in My Little Pony: FIENDship is Magic Issue #3 facing off against Star Swirl the Bearded and in My Little Pony: Legends of Magic using their hypnotic singing on Stygian's village before being defeated and banished by the Pillars of Old Equestria.

Adagio Dazzle is featured in the Rainbow Rocks screenplay novelization The Mane Event and Panorama Sticker Storybook and appears again in Make Your Own Magic: Starswirl Do-Over.[8]​[​specify​]​

Adagio Dazzle is the lead singer of the villainous band, The Dazzlings, and wants to take over Canterlot High at the battle of the bands. Her enchanting style has the power to cast a spell on anyone who sees her.[9]

A singing Adagio Dazzle doll is listed in a Hasbro press release[10] and has been displayed, with packaging additionally showing her pony version, both at the 2014 American International Toy Fair[11] and on Hasbro and Kmart's online listings of the product.[12][13]

A miniature doll of Adagio Dazzle is to be released as part of the Equestria Girls Minis toy line. The doll's packaging depicts Adagio as a unicorn.

Throughout Rainbow Rocks, Adagio Dazzle is shown to be scheming, manipulative, and only concerned with being adored by others. Using her dark magic, she is able to sway the students' opinion with ease and trick Trixie into removing the Rainbooms from the competition. She also displays a degree of sadism, seen when taking advantage of Sunset Shimmer's insecurities, and a considerable level of intelligence, as she quickly recognizes the Rainbooms as a source of magic. Adagio bears contempt toward her fellow sirens Aria and Sonata, calling them "idiots" and generally disliking their company. As the leader she is shown to grow irritated when her authority is questioned.

In Sunset's Backstage Pass, Adagio shows deep resentment over losing her powers and being trapped in the human world. She also shows no respect to the Dazzlings' fans, calling them "human scum" under her breath. 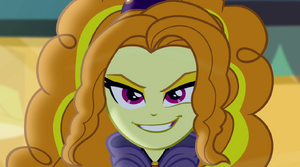 Retrieved from "https://mlp.fandom.com/wiki/Adagio_Dazzle?oldid=2150094"
Community content is available under CC-BY-SA unless otherwise noted.