Adagio Dazzle is a female siren and the main antagonist of My Little Pony Equestria Girls: Rainbow Rocks. She is the lead singer of her band The Dazzlings, rivaling[3] the Rainbooms.

Like those of her bandmates Sonata Dusk and Aria Blaze, Adagio Dazzle's wings are translucent and non-feathered. Human Adagio Dazzle resembles Unnamed Girl #11.

In music terms, the word "adagio" is a tempo marking indicating that music is to be played slowly.

Depiction in the film

In the film, Adagio and the other Dazzlings are introduced in the human world. They are sirens from Equestria who were banished to the human world by Star Swirl the Bearded. They are first seen in a café causing tension between the patrons when they witness the Equestrian magic that brought Sunset Shimmer to her downfall in the first film. Later, Sunset gives a tour of the school to Adagio and the other Dazzlings and tries to be friendly, but she gets suspicious when Sonata Dusk randomly blurts out that they sing "to get people to do what we want" and Adagio gets defensive over her pendant. Soon after, they convince all of the students except the main five and Sunset with their music to turn the friendly Mane Event into an all-out Battle of the Bands.

Adagio and the Dazzlings use their siren's songs to control student opinion and advance through the competition bracket. When the only bands between them and first place are the Rainbooms and Trixie and the Illusions, Adagio manipulates Trixie into removing the Rainbooms from the competition entirely. In the final battle against the Rainbooms, Adagio and the Dazzlings are eventually defeated and the gem pendants with which they controlled the students are destroyed. As a result, their inability to sing leads to them being chased off in disgrace.

Aside from flashbacks, Adagio's true form is never physically shown in the film, but she and her fellow band members gain pony-like ears, extended ponytails, and translucent bat-like wings. They also summon astral projections of their true siren forms from their pendants.

Adagio Dazzle is shown to be scheming, egotistical, cruel, and mainly concerned with gaining power.

A singing Adagio Dazzle doll is listed in a Hasbro press release[7] and has been displayed, with packaging additionally showing her pony version, both at the 2014 American International Toy Fair[8] and on Hasbro and Kmart's online listings of the product.[9][10] 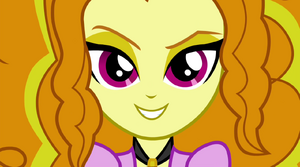 "The energy in this world isn't the same as in Equestria. We can only gain so much power here."
— My Little Pony Equestria Girls: Rainbow Rocks

" Ergh! I'll tell you one thing, being stuck here with you two isn't making this world any more bearable."
— My Little Pony Equestria Girls: Rainbow Rocks

"It does now. And we're going to use it to make everyone in this pathetic little world adore us!"
— Referring to Equestrian magic, My Little Pony Equestria Girls: Rainbow Rocks

"You'll have to excuse them. They're idiots."
— Referring to Sonata Dusk and Aria Blaze, My Little Pony Equestria Girls: Rainbow Rocks

Retrieved from "https://mlp.fandom.com/wiki/Adagio_Dazzle?oldid=1296984"
Community content is available under CC-BY-SA unless otherwise noted.