My Little Pony Friendship is Magic Wiki
Register
Don't have an account?
Sign In
Advertisement
in: Male characters, Authors, Creatures,
and 4 more
English

Ahuizotl has an elongated dog-like head, except for his eyes, which are positioned over his nose at the end of his snout. He walks on all fours, with dog-like hind limbs and ape-like forelimbs, and a long monkey-like tail with a hand on its end. Ahuizotl has a tuxedo style coat, having dark blue fur over most of his body, while his stomach, jaws and hands are of a lighter blue. Ahuizotl wears golden colored jewelry, such as a necklace, a single ear ring, and three bracelets, one for each foreleg, and one around his tail's wrist.

His overall appearance and name mirror the mythical creature Ahuizotl from Aztec culture. Rebecca Dart based the shape of his head on "an ancient sculpture", putting his eyes where the nostrils would be in order to "mix it up". The hand on his tail was influenced by the original mythology.[3]

Ahuizotl's next appearance in the episode sees him by an altar-bound Daring Do, continuing to gloat. Daring says, "You won't get away with this, Ahuizotl," and he replies, "But I already have." He pulls a lever on the wall, waves goodbye to Daring Do, and departs with his cats, leaving Daring to deal with spiked walls, spiders, cobras, and quicksand.

Ahuizotl appears again in Daring Don't, this time as a real creature of Equestria. When Dr. Caballeron is about to sell a golden ring to a disguised Daring Do, Ahuizotl angrily storms onto the scene and demands the ring. After Caballeron runs off in fear and Daring snatches the ring away, Ahuizotl orders his jungle cats to attack her. Using the nearby Rainbow Dash as bait, Ahuizotl distracts Daring Do long enough for her to be subdued and restrained. He then hauls her off to the Fortress of Talacon.

After leaving Daring Do bound to a wall in a chamber filling with piranha-infested water, Ahuizotl begins a ritual with the Rings of Scorchero to usher in eight hundred years of unrelenting heat. His efforts are thwarted by not just Daring Do but also Rainbow Dash and her friends. Through Rainbow Dash and Daring Do's actions, the Fortress of Talacon comes crumbling down. Upon emerging from the rubble, Ahuizotl swears revenge on Daring Do.

In Stranger Than Fan Fiction, Ahuizotl is mentioned and depicted through merchandise and cosplayers portraying him at the Daring Do Convention.

In Daring Done?, Ahuizotl is mentioned by Rainbow Dash.

In Daring Doubt, Ahuizotl catches Daring Do and Dr. Caballeron trying to steal the Truth Talisman of Tonatiuh, and he unleashes stone "Guardian-goyles" upon them in retaliation. When Fluttershy reaches out to Ahuizotl with kindness and a willingness to listen, Ahuizotl reveals that he is the guardian of the Tenochtitlan Basin and he is just protecting its artifacts from being stolen by Daring and Caballeron. In the end, he becomes an author in order to share his side of Daring Do's stories with the public.

Ahuizotl is also mentioned by Sweetie Belle in the Summertime Short The Canterlot Movie Club.

In My Little Pony: Friends Forever Issue #32, Ahuizotl appears to antagonize Daring Do and Fluttershy in his quest for the treasure of Queen Parabola, and he is shown to be in a tenuous partnership with Dr. Caballeron. According to Daring, Ahuizotl is the only one aside from Fluttershy who knows that she is afraid of spiders.

AHUIZOTL is an intimidating and devious creature with a taste for thievery! He's gone toe-to-hoof with Daring Do a time or two—since she's his archenemy. When backed into a corner, Ahuizotl commands his gang of jungle cats to strike! He's not very nice. He's not very nice at all.

Ahuizotl is a playable character in Gameloft's mobile game, and serves as a boss with a story role during the "Rarity's Retro Redux" event. His bio states "Guardian of the Tenochtitlan Basin, Daring Do's erstwhile archnemesis... and best-selling author?!"

Ahuizotl is typically portrayed with a very fearsome and maniacal demeanor. He is prone to greed and ferocity, shown in his repeated attempts to thwart Daring Do and his outburst at Dr. Caballeron when he reneges on their business deal. However, he is also prone to comical blunders, such as when Daring steals the Sapphire Statue during his moment of glory and when he falls victim to poison joke in Daring Do and the Eternal Flower.

Ahuizotl's long-standing rivalry with Daring Do usually prompts him to curse her name at the end of an adventure.

In Daring Doubt, it is revealed Ahuizotl's intentions are not actually villainous, and his enmity and hostile nature towards Daring Do and Caballeron stem from his role as guardian of his land's relics and their repeated theft of them.

"Daring Do, my old nemesis. You may have outsmarted my jungle cats, but you cannot escape me!"
— Daring Doubt

"Well... the thing is, I'm in charge of protecting this jungle. If another artifact goes missing on my watch, I'm going to be in so much trouble with the other guardian creatures."
— Daring Doubt 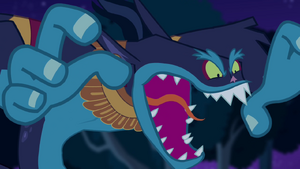