Start a Wiki
watch 02:10
'My Little Pony' Profile: Alicorns
Do you like this video?
Alicorns are pony characters in the show who have both a unicorn horn and Pegasus wings, and are all styled as royalty. They are referred to as Princess Ponies in Hasbro's toy line,[1]​[​dubious – discuss‍​]​ as Pegasus Unicorns in Little, Brown's book Mini Pony Collector's Guide, and, once, as Pegasus unicorns on Hasbro's My Little Pony Facebook page.[2] Meghan McCarthy, the show's head writer, says that the title of "princess" is one that is earned in Equestria.[3]

The third season episode Magic Duel marks the first use of the term "Alicorn" in the series, and in Magical Mystery Cure the term is used for the first time to directly refer to winged unicorns, previously referred to as unicorns in earlier seasons' episodes Friendship is Magic, part 1 and A Canterlot Wedding - Part 1.

Princess Celestia and her sister Princess Luna are introduced in the first episode in a series of medieval-like drawings with a narration that says there were "two regal sisters who ruled together and created harmony for all the land," and that "the elder used her unicorn powers to raise the sun at dawn. The younger brought out the moon to begin the night." Lauren Faust commented that Princess Celestia was originally supposed to be Queen Celestia, the highest authority with no parents who outrank her. Her status was later changed to "princess" at Hasbro's request.[4] Faust has stated that Celestia embodies the traits of all three pony kinds: Earth, Pegasus, and unicorn.[5] In Enterplay's trading card series, Series 1 lists the sisters' pony type as both Pegasus and unicorn but not Earth,[6] and Series 2 lists their pony type as all three[7] and also refers to them as "immortal alicorns";[8][9] a writer and consultant for both series has stated that the inclusion of Earth was "an intentional improvement" they made on Series 2, "based on feedback and it being one of those 'could be canon' sorts of things that just plain makes sense."[10] Faust has suggested that there is more to Princess Celestia than has been depicted of her in the series, and that she wanted Celestia to be "mysterious and hard to understand".[11]

The second-to-last episode of the second season, A Canterlot Wedding - Part 1, introduces Princess Cadance. She is Twilight Sparkle's foal-sitter in Twilight's flashback, and she becomes her sister-in-law after marrying Shining Armor in A Canterlot Wedding - Part 2. Various promotional materials, including a New York Times ad,[12] A Canterlot Wedding - Part 1's Hubworld, iTunes, and Netflix summaries, the back cover of the DVD Royal Pony Wedding, and the home page of Treehouse TV's Royal Wedding Contest site,[13] state that she is the niece of Princess Celestia. A blurb on one of the toy sets featuring Cadance says that she and Shining Armor "lead the Crystal Empire together!" Indeed, a background pony proclaimed her as "The Crystal Princess!" at the end of The Crystal Empire - Part 2. In Enterplay's trading card series, Series 1 lists her pony type as both Pegasus and unicorn but not Earth,[6] and Series 2 lists her pony type as all three;[7] a writer and consultant for both series has stated that the inclusion of Earth was "an intentional improvement" they made on Series 2, "based on feedback and it being one of those 'could be canon' sorts of things that just plain makes sense."[10]

The book Twilight Sparkle and the Crystal Heart Spell states that Cadance was born a Pegasus and became an Alicorn later.

Queen Chrysalis, only seen in the episode A Canterlot Wedding - Part 2, was described in her debut episode's script as "a GANGLY BLACK PEGACORN with a gnarled black horn."[14][15] She and the other changelings were designed by Rebecca Dart, the main character designer for season two.[16] Rebecca was inspired by the work of manga artists Junko Mizuno and Hideshi Hino, and after reading the name "Chrysalis", she "figured [Chrysalis] should be insect-like."[15][17] The changelings are referred to as a different species in the show and not as ponies.

Twilight Sparkle is introduced in the show as a unicorn, and she even calls herself a "regular old unicorn" in A Canterlot Wedding - Part 1, to which Princess Cadance replies "You are anything but a regular old unicorn." According to Meghan, "princess [in Equestria] is a designation that’s earned, not freely given and though princesses have specific leadership roles in pony society, being one really means 'being a good pony who shares the gifts that they have been given with others.'"[3] Twilight becomes a princess and gains wings in the episode Magical Mystery Cure.

The chapter book Twilight Sparkle and the Crystal Heart Spell describes Twilight's new status in chapter 1, "A Crown Achievement": "Twilight had received her very own set of wings. Real Pegasus wings! She was officially a part of a special breed of pony called an Alicorn. This meant that Twilight was now able to harness the magical powers of the Unicorns, the flight abilities of the Pegasi, and the strength of a good, true heart of an Earth Pony."

The show includes other Alicorns and a crew member of the show has explained them as animation errors. These include a filly in Twilight's imagination in Lesson Zero having both wings and a horn,[18] three royal guards in one of Twilight's flashbacks in A Canterlot Wedding - Part 1 having both wings and horns,[19] a unicorn stallion in Rarity Takes Manehattan having wings, and Lemon Hearts having wings in Rainbow Falls, and Rarity having wings in Pinkie Pride.

There is an illustration that shows a Alicorn princess mare and an Earth pony prince stallion in the book that the Cutie Mark Crusaders read in Hearts and Hooves Day.

Pinkie Pie briefly dresses up as an Alicorn in the episode Magical Mystery Cure. In The Mysterious Mare Do Well, the masked Mare Do Well is shown to have a unicorn horn and Pegasus wings, convincing Rainbow Dash that she's an Alicorn. However, it should be noted that she is never seen with both her horn and wings at the same time.

In the episode Sonic Rainboom, Rarity is given wings by a magic spell temporarily, made of gossamer and morning dew. These wings are similar to those of the flutter ponies from Generation 1.

The Glimmer Wings toys include a similarly butterfly-winged Rarity, packaged with a butterfly; according to this release's descriptions, Rarity "imagines having beautiful wings just like her butterfly friend".[20][21]

An Alicorn called Princess Skyla is included in the So Soft Newborn toys.[22]

Gameloft's mobile game formerly included a Changeling assuming the identity of Fleur Dis Lee but pretending to be an Alicorn, who the game identified as the unicorn Fleur Dis Lee[23][24] until an update replaced this Changeling with Fleur Dis Lee herself.[25] A model sheet for the game includes "Sweetiebelle[sic]" as an Alicorn.[26]

In a French My Little Pony magazine story, Celestia has a cousin named Léon, a four-year-old Alicorn. 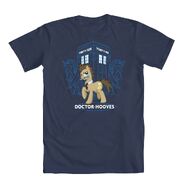 A Doctor Who weeping angels parody 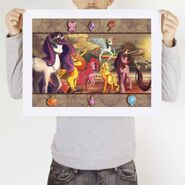 Fluttershy, Applejack, Pinkie Pie and Rainbow Dash with horns
Add a photo to this gallery

The Alicorn Amulet is an amulet which features the image of an alicorn. Trixie uses it to become a "highest level unicorn" and gain immense magical powers and antagonize the citizens of Ponyville in the episode Magic Duel. Twilight Sparkle finds out that only the wearer can remove the amulet and tricks Trixie into removing it with a fake amulet of her own in a magic duel.

Rarity with magic wings of gossamer and morning dew 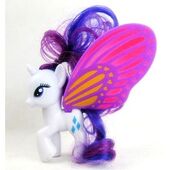 Rarity's imagination of herself with Glimmer Wings 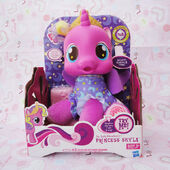 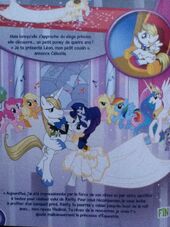 Léon in the upper right corner, an Alicorn foal 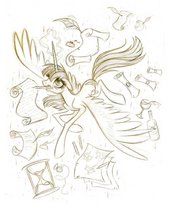 Spike looking at a statue resembling a horse with horn and wings.

Queen Chrysalis as Princess Cadance
Add a photo to this gallery

Retrieved from "https://mlp.fandom.com/wiki/Alicorns?oldid=1086586"
Community content is available under CC-BY-SA unless otherwise noted.