For the same-titled episode of My Little Pony: Pony Life, see All Bottled Up; All That Jitters.

All Bottled Up is the second episode of season seven of My Little Pony Friendship is Magic and the one hundred and forty-fifth overall. Notably, this is the only season premiere to not be a two-part episode.

In this episode, Starlight Glimmer and Trixie accidentally make the Cutie Map disappear while the Mane Six are on a friendship retreat, so Starlight uses a spell to bottle up her anger until the map is retrieved.

Two clips of Pinkie Pie acting like a cheerleader from this episode were dubbed by Andrea Libman and used to promote the series' season seven premiere on April 12 and April 14, 2017.[2][3]

Best Friends Until the End of Time and its scene reappears in Memories and More.

In the Castle of Friendship kitchen, Starlight Glimmer prepares a plate of tea cakes for Twilight Sparkle and her friends to take on their friendship retreat while Trixie tries to transform a salt shaker into a teacup. After Starlight gives her some spell-casting tips, Trixie successfully performs the spell, and she enthusiastically turns several more objects in the kitchen into teacups, causing Starlight's tea cakes to be ruined.

When Starlight vents her frustration at her, Trixie offers a simple bag of pretzels as a substitute. As Starlight becomes more frustrated, a magical cloud of red smoke begins to emanate from her horn, but it dissipates when she calms down.

At the Ponyville train station, Starlight, Trixie, and Spike see Twilight and her friends off as they leave for Manehattan. Starlight assures Twilight that they'll take care of the castle while she's gone, with Trixie jokingly remarking if anything goes wrong, Starlight can go back in time and fix it.

Later, Starlight offers to teach Trixie some more magic, and Trixie says she wants to learn teleportation. Starlight explains that her own magic is tied to her emotions—the stronger she feels, the stronger her magic. When Trixie brings up Starlight's dubious past, Starlight's anger causes more red smoke to manifest from her horn. Despite this, she agrees to teach Trixie about teleporting, using an apple placed on the Cutie Map as a target. Unfortunately, when Trixie casts the spell, it teleports the map away instead of the apple.

Starlight panics over the map's disappearance, and Trixie's overall lack of concern over the situation only causes her more frustration, generating more red smoke. When Starlight finally notices the smoke cloud over her head, she uses a spell to contain her anger inside a glass bottle before it causes her to drive Trixie away. Starlight reasons that Trixie sent the map to the last place she was thinking of, but Trixie can't remember what that place is. After bottling more of her rising anger, Starlight suggests they walk around town to jog Trixie's memory.

Meanwhile, in Manehattan, the Mane Six take part in an activity called "Manehattan Escapes", in which they are locked inside an escape room and must solve a series of team-building puzzles and riddles in order to get out. Upon learning that a group of griffons set the record for the fastest escape time of one hour, the Mane Six resolve to beat the record.

Back in Ponyville, Starlight and Trixie's walk across Ponyville takes them from Bulk Biceps' cinnamon nut stand to a jewelry store to Sweet Apple Acres, but the Cutie Map is nowhere to be found. At every turn, Trixie makes Starlight more and more frustrated, causing her to bottle more and more of her anger. The more anger Starlight bottles up, the weaker she inadvertently becomes. Once Trixie realizes what Starlight is doing, she tries to seize the bottle, and she causes Starlight to accidentally toss the bottle away at the precise moment that the jeweler pony and Granny Smith are buying cinnamon nuts from Bulk Biceps. The bottle shatters on the ground near them, and they are possessed by Starlight's anger.

Back in Manehattan, the Mane Six's great teamwork leads them to finding the key to the escape room's door. The six friends celebrate their triumph and unbreakable friendship by singing Best Friends Until the End of Time. Unfortunately, their song break puts them two seconds over beating the record, much to Rainbow Dash's disappointment.

In Ponyville, Bulk, Granny, and the jeweler pony—infected by Starlight's anger—shout angrily at Trixie over everything she made Starlight frustrated about throughout the day. They chase Trixie across town, and because of all the anger Starlight bottled up, she is too weak to help. Trixie is subject to more of the ponies' anger, but she doesn't know why they're mad at her. Starlight eventually drains the anger out of them and explains to Trixie that their anger actually came from her. She finally vents all of her pent-up frustrations about Trixie's behavior throughout the day. Once Trixie apologizes for how she acted, Starlight's anger subsides, and she realizes the negative repercussions of bottling up her emotions.

As Starlight and Trixie reconcile, Trixie finally remembers the last thing she was thinking of before teleporting the Cutie Map. She had sent it to the Ponyville Day Spa because she was thinking how glad she was to have befriended Starlight, and the Day Spa was where they first met.

Starlight and Trixie return the Cutie Map to the castle throne room just as the Mane Six return from their friendship retreat. Starlight tells Twilight that she learned another friendship lesson while they were gone, and Twilight expresses how proud she is that Starlight has taken initiative so soon after her graduation. Unable to have a spa day during their time in Manehattan, the Mane Six decide to have one at the local spa. Fearing that their friends will realize what happened, Trixie suggests casting a spell to wipe the spa ponies' short-term memories.

Starlight Glimmer: Haven't you learned anything about using magic to solve your problems?
Trixie: No. If we learned that lesson, how will we ever have fun?

Trixie: Whoops! I guess I pictured a teacup poodle? Heh.
Starlight Glimmer: Trixie! You ruined my teacakes!
Trixie: I just got excited! This is the first time I did a transfiguration spell! Real magic! Come on! Be impressed by me! [as Starlight Glimmer] "Yay, Trixie! You're so great at magic and having good hair!"

Starlight Glimmer: And I promised Trixie we'd practice more magic. It might be better if the castle was empty, if you know what I mean.
Trixie: [groans] Relax. If anything breaks, Starlight will just go back in time and fix it!

Trixie: I mean it won't be as impressive, but okay. Teach away, mini-Twilight.

Fluttershy: I'm just happy to be with all of you.
Pinkie Pie: Me, too! I'm not great at solving riddles, but I'm super great at cheering other ponies on while they do it! Go, us! Ooo, ooo! Woo-hoo!

Starlight Glimmer: Do you see this storm cloud? This has never happened before! All this magical energy has to go somewhere, and if I'm not using it to fight a magical duel or bend my friends' wills to obey my every command...

Pinkie Pie: [cheer-singing] Yay! We solved another clue, 'cause our friendship is so true! Yaaaay, us! Woo-hoo!

Starlight Glimmer: [sighs] I'm really... mad at you. You lost Twilight's map table. You make jokes like it's no big deal. It's like you don't even care you could get me in a lot of trouble. If we can't find that table, Twilight's never going to trust me again, and the worst part is you didn't even say you were sorry!
Trixie: I... I-I'm sorry. I had no idea you felt that way.

Jeweler Pony: Uh, hang on. Don't you work at the spa?
Bulk Biceps: [gasps] I'm late for my other job! What? I wear many hats.

Starlight Glimmer: Let's just say I learned a friendship lesson while you were gone.
Twilight Sparkle: You've barely graduated, and you're already taking initiative! [tearing up] Oh... So proud... 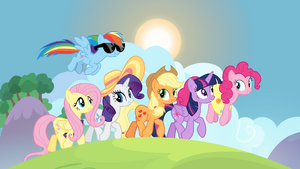 All Bottled Up image gallery

Retrieved from "https://mlp.fandom.com/wiki/All_Bottled_Up?oldid=2191592"
Community content is available under CC-BY-SA unless otherwise noted.