Amending Fences is the twelfth episode of the fifth season of My Little Pony Friendship is Magic and the one hundred and third episode overall.

In this episode, Twilight Sparkle returns to Canterlot with Spike to rekindle old friendships from before her move to Ponyville.

Originally, there was a scene involving Twilight contemplating giving up her role as the princess of friendship to Princess Celestia because of what her actions caused to Moon Dancer. Celestia then surprises Twilight by telling her that it's a lesson that she only recently learned herself, and that it's never too late to repair a broken friendship (referring to her relationship with Princess Luna). The scene was cut for time from the final version of the episode.[3]

At the Castle of Friendship, Twilight Sparkle relaxes with a book after a week of nonstop princess duties. Walking in after doing the dishes, Spike remarks about the irony of Twilight being the Princess of Friendship after being such a bad friend back in Canterlot. When Twilight denies this, Spike points to photos on the wall of Twilight and her Ponyville friends; she has no photos of her time in Canterlot.

Twilight is horrified and ashamed that she doesn't even remember any of her old friends' names. Determined to set this right, she tells Spike to pack up for a trip to Canterlot and to make a list of her friends' names.

After nightfall, Twilight and Spike fly to Twilight's old tower home in Canterlot, where everything has been largely untouched since they last occupied it, including Twilight's copy of Predictions and Prophecies and Spike's ruined gift to Moon Dancer. Upon seeing her old home in such a state, Twilight is determined to make amends with the ponies she left behind.

The next day, Twilight and Spike start out by visiting Minuette, who happily greets the two. Minuette is delighted to catch up on old times with Twilight and suggests a get-together with Lemon Hearts and Twinkleshine. At Joe's donut shop, the four friends have lunch together, and Twilight apologizes to the other three for not appreciating her friendship with them. Minuette, Lemon Hearts, and Twinkleshine don't take it personally, and they are thrilled to reconnect with Twilight again.

The four ponies and Spike visit the School for Gifted Unicorns, where Twilight reminisces about spending time with Moon Dancer as a filly. When she asks her friends about Moon Dancer, they admit that they eventually lost touch with her.

Minuette, Lemon Hearts, and Twinkleshine lead Twilight and Spike to Moon Dancer's residence: a ramshackle Canterlot cottage. When Twilight knocks on the door and Moon Dancer answers, she greets them rudely before slamming the door in their faces. Her behavior is a grim reminder of how Twilight used to be.

Twilight, Minuette, and Spike spend the next several days spying on Moon Dancer and notice that no one interacts with her. Minuette mentions that Moon Dancer has always been shy and was starting to come out of her shell in recent years, but after her party, she reverted to her asocial ways. Twilight resolves to make it up to her.

Twilight approaches Moon Dancer in the Canterlot library and attempts to befriend her, but Moon Dancer brushes her off at every turn. It is only when Twilight magically takes the form of a book illustration that Moon Dancer decides to talk to her. After they bond a little over classical philosophy, Twilight takes Moon Dancer to her old tower. She gives Moon Dancer the tower key and allows her access to the tower whenever she pleases—with the condition that she have dinner with their old friends. A disinterested Moon Dancer is about to leave before Twilight offers to teach her the book-form spell.

Give friendship a chance

Twilight wallows in her failure to reach out to Moon Dancer and imagines how heartbroken she was when Twilight didn't show up to her party.

"I know what I need to do. And I know just who can help me."
— Twilight Sparkle

The next day, when Minuette visits Twilight at her tower and finds no one there, Twilight suddenly flies in with her "secret weapon": Pinkie Pie, who happens to already be acquainted with Minuette. Pinkie and Minuette go to gather supplies for Twilight's plan while Twilight and Spike go off on their own.

Later, as Moon Dancer leaves the Canterlot library, she finds a trail of old history books leading somewhere. Collecting the books as she walks, Moon Dancer soon arrives at a party that Twilight and her friends put together. Twilight wishes to make up for missing Moon Dancer's last party with a new one.

In a fit of anger, Moon Dancer suddenly lashes out at Twilight, remarking that her party was the first time she ever made an effort to socialize with others. When Twilight not only missed the party but also left Canterlot without saying goodbye, Moon Dancer felt humiliated and thus rejected friendship so she wouldn't be hurt again. After venting her frustrations, she breaks down in tears.

As Twilight apologizes for hurting Moon Dancer, her old friends reach out to her once more and Spike brings in some other ponies that Moon Dancer is close to, including her sister. Moon Dancer tearfully accepts Twilight's apology and invites her friends to party with her.

Moon Dancer's party lasts well into the night. When it ends, Twilight, Pinkie, and Spike say goodbye to Moon Dancer, and she thanks Twilight for helping her rediscover friendship. Spike presents Moon Dancer with the present he never got to give her at her first party: a photograph of Twilight, Moon Dancer, and their friends sharing cupcakes.

Some time later, Moon Dancer joins her friends outside for a ball game as the photograph hangs from her wall.

Spike: It's kinda funny, isn't it? All these ponies comin' to you for advice about friendship?
Twilight Sparkle: What's funny about that?
Spike: You know, 'cause you used to be famous for being such a bad friend.

Minuette: Twilight Sparkle! [laughs] You old so-and-so! What are you doing here?! Hey, Spike! Look at these wings, huh?! [giggles] Hey, grab a picture of me and the princess, will ya?! I tried to tell my co-workers we used to be friends back when. [giggles] But they've never believed me!

Moon Dancer: Wow! A first edition of Principles of Magic! Hey, didn't I give this to you?
Twilight Sparkle: Maybe?
Moon Dancer: I did! Look, I even wrote something! "To my friend, Twilight Sparkle. Thanks for introducing me to the classics." I can see by the fact that you left it here that it meant a lot to you.

Twilight Sparkle: Moon Dancer, wait! A wise pony once taught me that there's more to life than dusty old books!
Moon Dancer: I tried friendship and it's just not for me. Now, if you'll excuse me...

Minuette: Hey! Pinkie Pie!
Pinkie Pie: Hi, Minuette! Twilight, you didn't say Minuette would be here!
Twilight Sparkle: You two know each other?
Pinkie Pie: Oh, sure! She was one of Cadance's bridesmaids! We hang out all the time when she's in Ponyville! Didn't you know that? Ha! And you call yourself the Princess of Friendship! 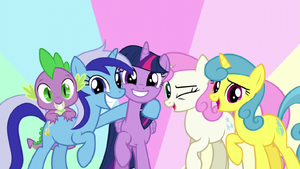