Amethyst Star is a female unicorn with a pink coat, a violet mane and tail with a floral lavender streak, amethyst eyes, and a cutie mark of three brilliant-cut diamonds. She shares her design with Lyra Heartstrings, Diamond Mint, and Lemony Gem, shares her mane and tail style with Rose and Silverspeed, and shares her tail style with Royal Ribbon. She has speaking roles in The Mysterious Mare Do Well, Slice of Life, and the German version of The Super Speedy Cider Squeezy 6000.

Amethyst Star is commonly featured in the series as a background pony. During party scenes and running sequences, she usually wears a yellow-orange saddle with a yellow skirt underneath, and sometimes a yellow flower is tucked into her mane next to her ear.

Amethyst Star first appears as a passerby in Canterlot in Friendship is Magic, part 1, holding a shopping bag in her mouth while Twilight Sparkle runs past her. She next appears in the party that Pinkie Pie throws for Twilight in the library at Ponyville, and since then has remained a consistent sight in the town.

In the episode Winter Wrap Up, Amethyst Star is the leader of the animal team, but she also partakes in the ice-carving scene as part of the weather team. In Over a Barrel, she is seen in Appleloosa, wearing the same yellow-orange saddle along with a straw-colored, dome-crowned cowboy hat. She appears often at the Grand Galloping Gala in The Best Night Ever. While marching on her way to the gala, she appears hornless when viewed from the front.

Amethyst Star competes in Sisterhooves Social alongside "Dinky Doo", and she holds a picnic with Liza Doolots in The Mysterious Mare Do Well. In the latter episode, Rainbow Dash tries to open her jar of peanut butter in an attempt at heroism, whereupon Amethyst Star responds with her first spoken lines.

In A Canterlot Wedding - Part 2, Amethyst Star is one of twelve horn-blowing unicorns at the wedding during This Day Aria, Part 1.

Amethyst Star appears in Princess Twilight Sparkle - Part 2, Flight to the Finish, Power Ponies, Rainbow Falls, Pinkie Pride, and Three's A Crowd. In Simple Ways, she gives Rarity a bouquet of roses when she's chosen as the pony of ceremonies for the Ponyville Days Festival. Amethyst Star also appears in Filli Vanilli, It Ain't Easy Being Breezies, For Whom the Sweetie Belle Toils, Leap of Faith, Trade Ya!, Inspiration Manifestation, Equestria Games, Twilight's Kingdom - Part 1, and Twilight's Kingdom - Part 2.

Amethyst Star appears in The Cutie Map - Part 1 outside of the Castle of Friendship, in Bloom & Gloom running from the twittermite swarm, and in Tanks for the Memories.

In Slice of Life, Amethyst Star appears in her second speaking role as Cranky Doodle Donkey and Matilda's replacement wedding organizer. She agrees to help Matilda and mentions that she used to be the "best organizer in all of Ponyville" before Twilight moved to Ponyville. Amethyst later appears at the wedding as a guest. The credits name her as in previous materials.

Amethyst Star appears at a cafe with Noteworthy in Princess Spike, at the friendship party at the end of Party Pooped, as a filly in Twilight's flashback in Amending Fences, in Ponyville's shared dream in Do Princesses Dream of Magic Sheep?, at Canterlot Carousel in Canterlot Boutique, at the Sisterhooves Social in Brotherhooves Social, and in Ponyville in Scare Master. In The Mane Attraction, she helps organize the charity event with Applejack. She also appears, somewhat obscured, in the final group shot during Friends Are Always There For You in The Cutie Re-Mark - Part 2.

In My Little Pony Best Gift Ever Amethyst appears as a cashier in a department store for the Hearth's Warming shopping season. She also does gift wrapping.

Ten differently-colored versions of Amethyst Star appear in the show, some wearing a saddle and skirt combination similar to hers, either with the same triple diamond cutie mark or with their cutie mark obscured by the skirt.

Amethyst Star, with a darker color scheme similar to in certain background appearances in some episodes, makes a brief appearance at the very beginning of My Little Pony Equestria Girls, listening to unicorn Goldengrape at the Crystal Empire train station.

Amethyst Star's human counterpart appears in the Rainbow Rocks encore short Life is a Runway, once during the runway sequence and again at Carousel Boutique at the very end of the short.

Amethyst appears briefly carrying a book inside the Canterlot library.

Amethyst Star appears in My Little Pony The Movie with a G-clef—S05E13 Unnamed Earth Mare #1—cutie mark during We Got This Together attending the Festival of Friendship in Canterlot.

Amethyst Star is a character in Gameloft's mobile game. The game's description of her states, "'The Best Organizer in all Ponyville' ...'til Twilight moved in. Since then, she's had to chill."

A second Amethyst Star mini-figure toy and collector card pair was released in November 2012 as part of the sixth wave of mystery packs. The U.S. version of this card uses the same description and trademark symbol as the U.S. version of the first card.[4]

A third Amethyst Star mini-figure toy and collector card pair was released in November 2013 as part of the ninth wave of mystery packs.[5][6]

Pop includes Amethyst Star, with her name listed with a trademark symbol.

Amethyst Star also appears with her name listed with a trademark symbol in Enterplay's collectible card game, which is the first time that she is simultaneously referred to by name and depicted with the same design as in the show. Her Gen Con Indy 2013 demo card attributes to her the quote "The secret to being Animal Team captain? Critters LOVE peanut butter."[7] Her card α #80 C lists the quote "The secret to running the Animal Team? Critters LOVE peanut butter." α #134 U, Critter Cuisine, attributes to her and Twinkleshine the respective quotes "But ferrets are carnivorous!" and "Shhh, maybe they don't know that yet!" Her The Crystal Games expansion set card #77 C gives her the description "Amethyst Star's leadership of the Winter Wrap Up animal team has given her plenty of experience defusing tense situations."

A Rainbow Rocks doll of Amethyst Star is listed on Hasbro's website.[9]

"I used to be the best organizer in all of Ponyville!"
— Slice of Life 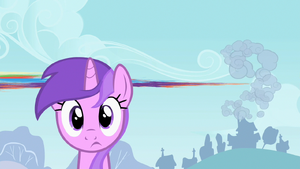