My Little Pony Friendship is Magic Wiki
Register
Don't have an account?
Sign In
Advertisement
in: Cast and Crew, Recognized for awards

Andrea Libman is a voice actress and singer in My Little Pony Friendship is Magic. Her most prominent roles in the series are as Fluttershy and the speaking voice of Pinkie Pie.

Libman initially became involved with the show through her prior experience in G3 My Little Pony animated specials, having voiced Sweetie Belle.[1] In addition to auditioning for Pinkie Pie and Fluttershy, Libman had also auditioned for Twilight Sparkle.[2]

While Pinkie Pie's singing voice is usually provided by Shannon Chan-Kent, Libman occasionally sings for Pinkie, such as in Hop Skip and Jump song, Welcome Song, Happy Monthiversary, and The Goof Off.

In November 2014, Libman received a UBCP/ACTRA Award for "Best Voice" for her roles as Pinkie Pie and Fluttershy in Filli Vanilli.[3]

In previous generations of My Little Pony, Libman provided the voice of Sweetie Belle and Zipzee in several direct-to-video animated specials.

Outside My Little Pony, Libman has provided voices for characters in numerous animated series, including Ikuko Otonashi in Maison Ikkoku, Madeline in the second and third season of Madeline, young AndrAIa in ReBoot, Emmy in Dragon Tales, Chi-Chi in Dragon Ball, X-23 in X-Men: Evolution, Harmony Bear in Care Bears: Adventures in Care-a-Lot, Cathy in Monster Buster Club, Maya in Maya the Bee, Cylindria in Pac-Man and the Ghostly Adventures, Claude in Salty's Lighthouse, Lemon Meringue, Princess Berrykin, and Sweet Grapes in Strawberry Shortcake's Berry Bitty Adventures, and various supporting roles in the 1995 version of Littlest Pet Shop, Dragon Ball Z, and Sabrina: The Animated Series.

Among Libman's live-action credits are Little Women, Andre, and a guest role on The X-Files. 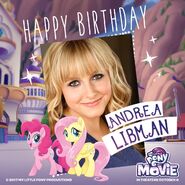