Angel Wings is a female Pegasus pony who appears in the season six episode Top Bolt as one of the Wonderbolt Academy trainees. She has a grayish cream coat, a light brown mane with bright red streaks, blue eyes, and a cutie mark of a winged heart, and she wears a bright red bow in her mane and two red bracelets on her left foreleg.

Angel Wings is an original character created by Lex Heule. Heule has a congenital heart disease and connective tissue disorder, and they were able to play their own character in the show through the Make-A-Wish Foundation,[1][2] making them the second individual to do so after Sylvain-Nicholas LeVasseur-Portelance, who voiced Stellar Eclipse.

Angel Wings is the tenth original character to appear in the show, preceded by Holly Dash, Wild Fire, Midnight Strike, "Slendermane", Peachy Pitt, Stellar Eclipse, "Whoa Nelly", and Bittersweet and Leadwing. She was designed through GeneralZoi's Pony Creator and referred to by Heule as "Angel Heart" in November 2015.[3] In her initial design, she had a gray muzzle and white bow.

Angel Wings appears in the season six episode Top Bolt as one of seven new applicants to the Wonderbolt Academy when Twilight Sparkle and Rainbow Dash are summoned by the Cutie Map. When Academy trials week starts, Angel Wings expresses nervousness when drill instructor Spitfire suggests the possibility of having one's wings fall off during training. Before doing laps around the Academy, she tells Twilight and Rainbow that they are her favorite ponies in all of Equestria.

Angel Wings appears later during the classroom portion of Academy training, feebly busting clouds in the sky, and having a turn on the Dizzitron. She also watches Sky Stinger and Vapor Trail's final evaluation tests with Twilight, Rainbow, Spitfire, and the other trainees. After Sky and Vapor are accepted into the Academy, Angel Wings is so impressed by them that she says they are her new favorite ponies in all of Equestria—much to Rainbow Dash's annoyance.

Angel Wings is a character in Gameloft's mobile game. The game's description of her states, "A Wonderbolt trainee, and also a fan: She’s hailed Rainbow Dash as the best in the land!"

Enterplay collectible card game Defenders of Equestria #59 R, a card of Angel Wings, lists her name with a trademark symbol.

"She's just exaggerating to make a point, right? I mean, wings can't really fall off... can they?"
— Top Bolt

"You don't think Rainbow Dash is the pony whose wings fell off, do you?"
— Top Bolt

"Um, I just wanted you to know, you two are my favorite ponies in all of Equestria."
— To Twilight Sparkle and Rainbow Dash, Top Bolt

"Um, I just wanted you to know, you two are my new favorite ponies in all of Equestria."
— To Sky Stinger and Vapor Trail, Top Bolt

"Oh my gosh, I love absolutely everything you do! I commissioned plushies of both of you. Will you sign their hooves for me please?!"
— Enterplay collectible card game Defenders of Equestria #59 R card of Angel Wings 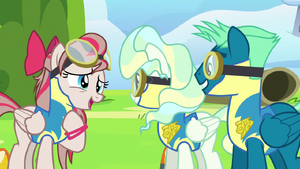