Apple Brown Betty is a background Earth pony and a member of the Apple family. She has a brown coat, a two-tone green mane, green eyes, and a cutie mark of an apple Brown Betty. She is named but unidentified in the show, and she is both named and identified in merchandise.

Apple Brown Betty is first mentioned in The Ticket Master, when Applejack offers Twilight Sparkle apple Brown Betty ("the dessert, not my auntie") in exchange for a ticket to the Grand Galloping Gala.

Apple Brown Betty physically appears in Apple Family Reunion, in which she is briefly seen in a flashback and attends the eponymous reunion with other Apple family members. When a disastrous family hayride results in the destruction of the Sweet Apple Acres barn, Apple Brown Betty takes part in the barn's reconstruction during the song Raise This Barn. She also appears in the family photo at the end of the song.

In Filli Vanilli, Apple Brown Betty appears as a spectator at the Ponyville turkey call competition. She later appears at the Rainbow Falls Traders Exchange in Trade Ya! during Pinkie Pie's auction of Princess Twilight's books.

In Bloom & Gloom, Apple Brown Betty appears in a photo during one of Apple Bloom's nightmares.

In The Summer Sun Setback, Apple Brown Betty is seen running away when Earth ponies start losing their energy. She also appears in Growing Up is Hard to Do, fleeing from Bloofy's whirlwind.

Apple Brown Betty was first identified on her Enterplay collectible card game card α #36 C, which lists the quote "You can stick just about any ol' fruit into a crumble and it'll taste fine, but you ain't tried nothin' 'til you tasted my grandma's secret vanilla apple brown betty recipe!" According to Enterplay's May 9, 2014 full card list by Christine Hullemeyer, Apple Brown Betty "was Curly Cobbler".[1]

"You can stick just about any ol' fruit into a crumble and it'll taste fine, but you ain't tried nothin' 'til you tasted my grandma's secret vanilla apple brown betty recipe!"
— Enterplay collectible card game α #36 C card of Apple Brown Betty 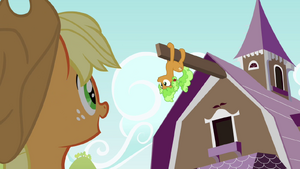 Retrieved from "https://mlp.fandom.com/wiki/Apple_Brown_Betty?oldid=2132454"
Community content is available under CC-BY-SA unless otherwise noted.