Apple Bumpkin is a female background Earth pony and a member of the Apple family who appears commonly throughout the show, often alongside other members of the Apple family. She has a light yellow coat, a bright red mane, light orange eyes, and a cutie mark of three caramel apples. She is called Apple Dazzle in some merchandise.

In both Dragonshy and Swarm of the Century, Apple Bumpkin appears briefly in the Ponyville park background alongside other background ponies. She also appears as a lake scorer in Winter Wrap Up. In Green Isn't Your Color, she appears in the mob of ponies crowding around Fluttershy after she becomes a model. In Over a Barrel, she appears as one of the Appleloosans participating in the battle against the bison herd. She later appears clearing a path in the Appleloosa apple orchard for the bison stampede after their conflict is resolved.

In Sisterhooves Social, Apple Bumpkin appears briefly in a zoomed-out crowd shot of the obstacle course during the titular event. In The Mysterious Mare Do Well, she appears in crowd shots watching Rainbow Dash save a baby carriage from falling off a cliff and later cheering for Rainbow Dash after reuniting the baby with her mother. In Secret of My Excess, she makes a background appearance with "Tornado Bolt" and Rainbowshine sitting outside a house in Ponyville. In The Last Roundup, she appears in the crowd of ponies cheering for Applejack and later surprising Applejack in the Sweet Apple Acres barn as she returns from the Equestria Rodeo. In Hearts and Hooves Day, she appears standing with Comet Tail during The Perfect Stallion.

Apple Bumpkin appears in the crowd of ponies watching Twilight's performance for the Saddle Arabian delegates in Magic Duel. She makes several appearances throughout Apple Family Reunion. She is among the first of the Apple family members to arrive at the reunion, and she appears in several shots of Raise This Barn. In Magical Mystery Cure, she appears in a birds-eye view of Ponyville in the rain during I've Got to Find a Way

Apple Bumpkin parties with the Appleloosans at the beginning of Pinkie Pride, watches the turkey call competition in Filli Vanilli, walks toward Flim and Flam's tent in Leap of Faith, and attends the Rainbow Falls Traders Exchange in Trade Ya!.

In Appleoosa's Most Wanted, Apple Bumpkin appears as a spectator at the Appleloosa Rodeo. She also appears walking in Dodge Junction with Jonagold in Party Pooped.

In The Gift of the Maud Pie, Apple Bumpkin appears sitting in a park in Manehattan with "Tornado Bolt". In Buckball Season, she appears in Appleloosa in the audience spectating the buckball game between Ponyville and Appleloosa.

In Parental Glideance, Apple Bumpkin appears cheering at the Wonderbolts' showcase in Canterlot.

In Yakity-Sax, Apple Bumpkin appears cheering at the Wonderbolts Derby in Canterlot.

In Sparkle's Seven, Apple Bumpkin makes a background appearance in Applejack's fantasy cheering for Apple Chord as she performs on a stage at Sweet Apple Acres with Perfect Pie and Apple Cinnamon. In The Summer Sun Setback, she appears in Canterlot as one of the Earth ponies in charge of food for the final Summer Sun Celebration and runs away when the food is suspected of weakening the ponies who eat it. She later appears pushing party cannon with Wensley as the Celebration is set to happen again. In Growing Up is Hard to Do, she makes a background appearance walking by the buckball stadium during the Appleloosa County Fair.

Apple Bumpkin appears in My Little Pony The Movie during We Got This Together and during Tempest Shadow's attack on Canterlot.

Apple Bumpkin appears on page 7 of My Little Pony: Friendship is Magic Issue #5, in a nightmare that Applejack has. In My Little Pony/Transformers Issue #4, she is summoned to Sweet Apple Acres by Discord to help Applejack drive the Insecticons off the farm. On page 8, she teams up with Big McIntosh and Babs Seed to take down Chop Shop.

Apple Bumpkin is an available playable character in Gameloft's mobile game. She was added to the iOS version of the game on June 4, 2014. Her in-game description states, "This little pony is never far from fun! Apple Bumpkin is adorable, loyal and loves a good candy apple."

"Grandpappy's lucky neckerchief has gotten me through more scrapes than you could shake an apple tree at!"
— Enterplay collectible card game Canterlot Nights #24 C card of Apple Bumpkin 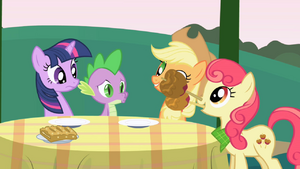