For the beverage, see Food and beverage.

Apple Cider is a female Earth pony and member of the Apple family. She has a light blue coat, gold mane and tail, blue eyes, and a cutie mark of three apple cores. She is unnamed in the show, but she is named in merchandise and other media.

Apple Cider first appears in Friendship is Magic, part 1 meeting Twilight Sparkle and Spike at the Apple family reunion. She later appears in Green Isn't Your Color marveling at the newly popular Fluttershy.

Apple Cider is named as a playable character in Gameloft's mobile game; her in-game description states, "Apple Cider is sweet, shy and sparkling blue -- one of the Apple family through and through." 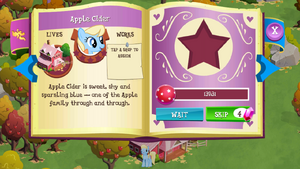 Retrieved from "https://mlp.fandom.com/wiki/Apple_Cider?oldid=2148007"
Community content is available under CC-BY-SA unless otherwise noted.