Apple Cinnamon is a background Earth pony and a member of the Apple family. He has a reddish brown coat, a bright green mane, green eyes, and a cutie mark of an apple and two cinnamon sticks. He is unnamed in the show, but he is named in merchandise and other media.

Apple Cinnamon first appears in the season three episode Apple Family Reunion. He attends the reunion with other Apple family members, arriving with Gala Appleby and Wensley by airship. When a disastrous family hayride causes the Sweet Apple Acres barn to be destroyed, Apple Cinnamon takes part in the barn's reconstruction during Raise This Barn. He also appears in the family photo in front of the rebuilt barn.

In Filli Vanilli, Apple Cinnamon appears as a spectator of the Ponyville turkey call competition. He later appears walking toward Flim and Flam's tent at the beginning of Leap of Faith and at the Rainbow Falls Traders Exchange in Trade Ya!

In Sparkle's Seven, Apple Cinnamon appears in Applejack's Apple Chord fantasy cheering for Apple Chord in the background with Perfect Pie and Apple Bumpkin after she performs on a stage at Sweet Apple Acres. In The Summer Sun Setback, he appears as one of the Earth ponies in charge of food during preparations for the final Summer Sun Celebration in Canterlot as a weakened Braeburn warns the other ponies to get away from the food. He subsequently appears carrying a weakened Apple Honey as the Earth ponies evacuate the food area.

Apple Cinnamon is a playable character in Gameloft's mobile game, added in the version 1.9 update on June 4, 2014. His in-game description states "Apple Cinnamon is a sweet-smelling stallion who likes to keep things classy with his bolo tie... He doesn't leave the barn without it!" 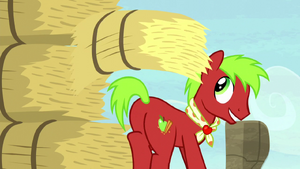