Apple Cobbler is a background Earth pony and a member of the Apple family who appears commonly throughout the series, often alongside other members of the Apple family. She has a toffee colored coat, a yellow mane (with an extra shade of yellow in her tail), and light blue eyes. She is unnamed in the show, but she is named in merchandise and other media. She shares her design with Red Gala, "Magdalena", and "Sundowner", and shares her design and eye color with S06E04 Unnamed Earth Mare #2.

In various scenes in some episodes, Apple Cobbler appears with a different cutie mark—the same as of Merry May, Sunny Rays, "Velvet Light", "Skyra", and S06E04 Unnamed Earth Mare #2—and glasses.

In both Dragonshy and Swarm of the Century, Apple Cobbler appears briefly in the background alongside Lyra Heartstrings. In Green Isn't Your Color, she points toward Fluttershy when Twilight mistakenly removes her disguise. She later appears in A Bird in the Hoof leaving Princess Celestia's party; as she is leaving, Pinkie Pie cartwheels into her.

In The Last Roundup, Apple Cobbler appears at Applejack's surprise welcome home party when her letter arrives stating she isn't returning home. In A Friend in Deed, she appears during the Smile Song; Pinkie Pie helps her sunbathe by bending a tree that was casting a shadow. In A Canterlot Wedding - Part 2, she appears in the crowd of ponies after Queen Chrysalis reveals herself, and near the end of the episode when Shining Armor and Princess Cadance are leaving in their carriage.

Apple Cobbler makes several appearances throughout Apple Family Reunion. She is among the first of the Apple family members to arrive at the reunion, and she appears in several shots of Raise This Barn; in one shot, she appears with pink eyes.

Apple Cobbler appears in Bloom & Gloom running from the twittermite swarm and in Appleoosa's Most Wanted in a crowd of ponies at Appleloosa.

Apple Cobbler appears in My Little Pony The Movie with a speaking line to S04E26 Unnamed Earth Mare #1.

In the IDW comics, Apple Cobbler appears on page 13 of My Little Pony Micro-Series Issue #5.

Apple Cobbler is one of the available playable characters in Gameloft's mobile game, in which she is named and her cutie mark is identified as an apple brown betty. She was added to the game in a Valentine's Day 2013 update.

Another one of Applejack's many pony relatives, who has an apple brown betty for a cutie mark.

Apple Cobbler is also named with a trademark symbol on her Enterplay collectible card game card, the Gen Con Indy 2013 demo version of which attributes to her the quote "No, Pinkie Pie, my name DOESN'T mean that I make shoes out of fruit..."[2] and the α #22 C version of which gives her the description "Pinkie Pie once asked Apple Cobbler if she makes shoes out of fruit. Nopony knows if she was kidding or not."[3]

"What is it?"
— The Summer Sun Setback 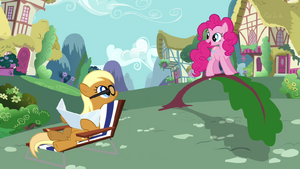