Apple Honey is a female Earth pony in the Apple family. She has a light sap green coat, pale goldenrod mane and tail, violet eyes, and a cutie mark of three green-iced cupcakes. She is unnamed in the show, but she is named in merchandise and other media.

Apple Honey most commonly appears alongside other members of the Apple family. She first appears at the Apple family reunion in Friendship is Magic, part 1 when they meet Twilight Sparkle and Spike. She later appears in Green Isn't Your Color, marveling at the newly popular Fluttershy.

In Sisterhooves Social, Apple Honey briefly appears among the race participants at the titular event. She is seen cheering for Rainbow Dash after several of her heroic moments in The Mysterious Mare Do Well, she appears at Applejack's welcome home party in The Last Roundup, and she briefly appears during The Perfect Stallion in Hearts and Hooves Day.

Apple Honey makes several appearances throughout Apple Family Reunion and takes part in the raising of the new barn in Raise This Barn. In Magical Mystery Cure, she is seen during I've Got to Find a Way.

In Filli Vanilli, Apple Honey appears in the crowd at the turkey call competition in Big McIntosh's flashback, and she appears in several shots at the Rainbow Falls Traders Exchange in Trade Ya!

In Bloom & Gloom, Apple Honey appears fleeing from a swarm of twittermites. In Appleoosa's Most Wanted, she appears in a crowd of ponies at Appleloosa. She also appears in Party Pooped and Brotherhooves Social.

Apple Honey appears in My Little Pony The Movie in Canterlot during the Friendship Festival and when Tempest Shadow's airship arrives.

Apple Honey is a playable character in Gameloft's mobile game. Her in-game description states, "Some ponies are fast, some ponies are funny, but when it comes to cool -- you can't beat Apple Honey!"

Apple Honey is depicted with the same design as Pinkie Pie and first named in the ninth wave of mystery pack toys and collector cards, the English-only and English/French/Spanish versions of which each list her name with a trademark symbol and state that she "is warmhearted and friendly to everypony" and the English/French/German/Spanish/Portuguese/Italian/Dutch/Swedish/Danish/Greek/Polish/Turkish/Russian version of which states that she "is warmhearted!" A November 6, 2013 "vorläufige Abbildung" image for mystery packs uses July 5, 2012 fanart of her with her in-show design.[1]

"I feel weak all of a sudden..."
— The Summer Sun Setback 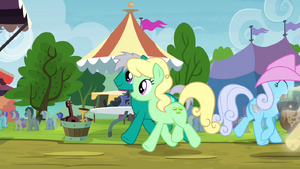