Start a Wiki
Apple Leaves is a female Earth pony and member of the Apple family. She has a deep orange coat, green and white mane and tail, grayish purple eyes, and a cutie mark of an apple and five leaves. She has a minor speaking role in Apple Family Reunion.

Apple Leaves first appears in the season three episode Apple Family Reunion. She attends the reunion with other Apple family members, arriving with Apple Dumpling by wagon. During the reunion, Apple Leaves spends most of the time making apple fritters due to Applejack's pressing.

When a disastrous family hayride causes the Sweet Apple Acres barn to be destroyed, Apple Leaves takes part in the barn's reconstruction during Raise This Barn. She also appears in the family photo in front of the rebuilt barn.

In season four, Apple Leaves appears at the Rainbow Falls Traders Exchange in Trade Ya!

Apple Leaves is a playable character in Gameloft's mobile game, added in the version 1.9 update on June 4, 2014. Her in-game description states "With a streaked green and white mane, Apple Leaves is one Earth pony that's not afraid to go out on a limb and branch out."

"Oh, sure do. Tell you what, my Apple Tart may just be a baby, but he is a hoot!"
— To Apple Dumpling, Apple Family Reunion

"Sure are!"
— To Applejack, Apple Family Reunion 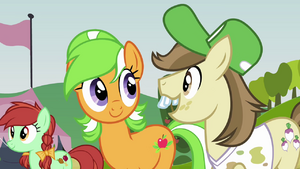 Retrieved from "https://mlp.fandom.com/wiki/Apple_Leaves?oldid=1809573"
Community content is available under CC-BY-SA unless otherwise noted.