Apple Munchies is a female Earth pony and member of the Apple family. She has a light green coat, gold mane and tail, reddish-orange eyes, and a cutie mark of three apple cores. She is unnamed in the show, but she is named in merchandise and other media.

Apple Munchies first appears in Friendship is Magic, part 1 meeting Twilight Sparkle and Spike at the Apple family reunion. She later appears in Appleloosa in Over a Barrel; she takes part in the conflict between the ponies and buffalo, but she eventually meets them on friendlier terms along with the rest of the town.

She parties with the buffalo at the beginning of Pinkie Pride, and she spectates the Equestria Games in the episode of the same name.

Apple Munchies attends the Appleloosa Rodeo in Appleoosa's Most Wanted.

In Buckball Season, she makes a background appearance spectating the buckball game between Ponyville and Appleloosa.

Apple Munchies appears in My Little Pony The Movie in Canterlot during the Friendship Festival, and later as one of the ponies fleeing when the Storm King attacks the city.

Apple Munchies is a character in Gameloft's mobile game. The game's description of her states, "Ever since getting to know the local buffalo herd, this friendly Appleloosan has always tried to show understanding to her neighbors."

A mini-figure toy of Apple Munchies was displayed at the 2015 American International Toy Fair and is available in one of six Friendship is Magic Collection Single Story Packs, which names her with a trademark symbol. 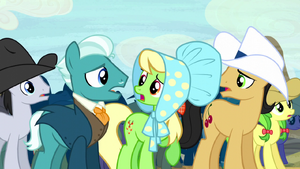 Retrieved from "https://mlp.fandom.com/wiki/Apple_Munchies?oldid=2158375"
Community content is available under CC-BY-SA unless otherwise noted.