For the mare whose placeholder name is "Apple Bottom", see List of ponies#Apple Bottom.

Apple Split, or Apple Bottoms, is a background Earth pony and a member of the Apple family. He has a blue coat, a red mane, reddish brown eyes, and a cutie mark of three bottom halves of apples. He is not named in the show, but he is named "Apple Split" with a trademark symbol in first-party merchandise and named "Apple Bottoms" in second-party other media.

Apple Split first appears in the season three episode Apple Family Reunion. In a flashback to a past family reunion, he meets an infant Applejack when she sneaks apple fritters off a picnic table. He attends the present day reunion with other Apple family members and takes part in the raising of the new barn at Sweet Apple Acres during Raise This Barn. He also appears in the family photo in front of the reconstructed barn.

In Pinkie Apple Pie, Apple Split appears in a photo on a wall in Goldie Delicious' cabin. In Trade Ya!, he briefly appears at the Rainbow Falls Traders Exchange.

In The Gift of the Maud Pie, Apple Split is seen walking on the sidewalk of Manehattan at sunset.

In My Little Pony/Transformers Issue #2, Apple Split appears in the audience of Pinkie Pie's baking show.

Apple Split, formerly under the name Apple Bottoms, is a character in Gameloft's mobile game, added in the version 1.9 update on June 4, 2014. His in-game description states "This pink-haired party pony is one of the spunkier members of the Apple family." A loading screen of the game's and a Gameloft promotional image use fanart of him.[2]

Apple Split is featured in the thirteenth mystery pack wave of mini-figure toys and collector cards. His card lists his name with a trademark symbol and states "He is so friendly!"

"Hey, where did all them apple fritters go?"
— Apple Family Reunion

"And who are you, little one?"
— Apple Family Reunion 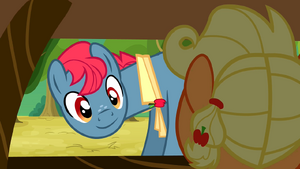