Apple Stars is a female unicorn pony with a purple coat, green mane and tail, magenta eyes, and a cutie mark of two green apples. She is unnamed in the show, but she is named in merchandise and other media.

In the season two episode A Friend in Deed, Apple Stars and Earth pony "Princess Erroria" open a Ponyville window and sing in the choir of the Smile Song.

Apple Stars is named with a trademark symbol both in the seventh wave of mystery pack toys and collector cards, which depicts her with the design as Rarity and states that she "loves to spend time talking with her friends!", and on her Enterplay collectible card game card α #51 R, which gives her the description "When somepony beats Granny Smith at an apple trivia contest, she MUST mean serious business." A mystery pack wave 7 image formerly displayed by a mystery pack listing on the website of the Greek company KAPSIS refers to Apple Stars as "Green Apple", a name previously used for a G3 pony.

"...sunshine, sunshine."
— Together with "Princess Erroria" and others singing in the Smile Song, A Friend in Deed 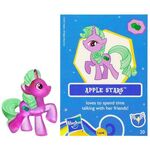 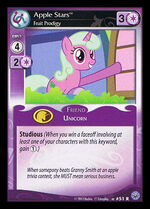 Retrieved from "https://mlp.fandom.com/wiki/Apple_Stars?oldid=2109904"
Community content is available under CC-BY-SA unless otherwise noted.