View source
watch 01:21
'My Little Pony' Lore: Apple Family
Do you like this video?
Play Sound

The Apple family, sometimes called the Apple clan,[note 1] are Applejack's relatives in My Little Pony Friendship is Magic. They are a large family of Earth pony farmers, who own apple farms all over Equestria. The Apple family are the original founders of Ponyville.

The whereabouts of Applejack's parents is touched on in the episode Apple Family Reunion. At the end of the episode, the shot fades to a view of Sweet Apple Acres as two shooting stars fly through the sky. The shooting stars are meant to represent Applejack's parents according to storyboard artist Sabrina Alberghetti.[1] In Applejack and the Honest-to-Goodness Switcheroo, Applejack's mother is mentioned. In Crusaders of the Lost Mark, Applejack makes explicit mention of her "mom and dad", saying they'd be proud of Apple Bloom for getting her cutie mark if they "were here."

Applejack's parents Bright Mac and Pear Butter appear in flashback in the season seven episode The Perfect Pear, in which they are revealed to have had a Romeo and Juliet-like romance because of a feud between the Apple family and Pear family. As a result of their parents' union, Applejack and her siblings are half-Apple and half-Pear.

Lauren Faust had previously mentioned that the whereabouts of Applejack's parents has not been planned, and that the show was unlikely to mention that they've passed away.[2] Faust stated that she had wanted Applejack's parents to be deceased, and was holding back from defining it in the hopes that some of the show's restrictions were relaxed further down the line.[3] At the 2016 Middle Equestrian Convention in Poland, My Little Pony character designer Kora Kosicka stated in response to a fan question that Applejack's parents are dead.[4]

Applejack later explains to Twilight in Applebuck Season that her relatives had all gathered for the Apple family reunion, and had been working at their own farms at the time, and were unable to lend a hoof to Applejack. However, several of them, including Apple Bumpkin, Apple Cobbler, Apple Fritter, Apple Honey, Apple Munchies, Gala Appleby, Peachy Sweet, Perfect Pie, and Red Gala, help prepare Applejack's surprise party in The Last Roundup, and Caramel Apple appears in the same episode. Applejack's aunt Apple Brown Betty is mentioned in The Ticket Master, but does not appear until Apple Family Reunion. Another relative, Applejack's cousin Braeburn, is introduced in Over a Barrel. He lives in the frontier town of Appleloosa, along with many more apple farmers.

The Cutie Mark Chronicles establishes that Applejack is related to the Oranges, who Applejack calls Aunt and Uncle Orange; toys refer to the latter as Mosely Orange. Apple Bloom's cousin Babs Seed is introduced in One Bad Apple, mentioning that she has a "big sis". Babs Seed never told her "big sis" but in the end of One Bad Apple Applejack makes her promise that she'll tell her "big sis" when she gets bullied for not having a cutie mark. Great uncle Honeycrisp is mentioned by Applejack in the My Little Pony: Friendship is Magic Issue #3 story The Return of Queen Chrysalis ~or~ Love is a Many Splintered Thing ―Part III―. Great uncle Needle is mentioned by Big McIntosh in the Issue #10 story Zen and the Art of Gazebo Repair - Part Deux "If You Only Have a Hammer, You See Every Problem as a Nail". Great granduncle Chili Pepper is mentioned throughout the Issue #25 and Issue #26 story arc The Good, the Bad and the Ponies.

Granny Smith refers to her parents and siblings as "the Smith family" in Family Appreciation Day.

In Pinkie Apple Pie, it is suggested that Pinkie Pie is a possible cousin to the Apple family, but all evidence given leaves this unclear. The same episode also introduces cousin Goldie Delicious, who mentions Applejack's great-great-great-great uncle Apple Tart.

In Somepony to Watch Over Me, Granny Smith goes to visit great aunt Pine Apple.

Granny Smith's father, looking injured but otherwise the same as when his now-elderly daughter was young (as shown in Family Appreciation Day, Apple Family Reunion, and Bats!), appears in modern day in Leap of Faith and a flashback in Where the Apple Lies.

The Perfect Pear introduces Applejack and her siblings' maternal grandfather Grand Pear of the Pear family. After becoming estranged from his daughter Pear Butter and moving to Vanhoover, he returns to Ponyville to reconnect with his grandchildren.

In Shadow Play - Part 2, Applejack mentioned that the branch of Apple family, which is Applejack's ancestors lived in the Hollow Shades.

In The Big Mac Question, Sugar Belle becomes a part of the Apple family when she marries Big Mac. They later have a son in the future in The Last Problem.

The founding of Ponyville

Granny Smith recounts how the Smith family came to found Ponyville in the episode Family Appreciation Day. As nomadic "pilgrim pony folk", they traveled Equestria collecting and selling seeds and looking for a suitable place to settle down. During a visit to Canterlot, Princess Celestia gave them the land near the Everfree Forest. While searching the forest for food, the young Granny Smith discovered the zap apples. Ponies came from all around to purchase the family's Zap Apple Jam, and Ponyville began to grow around Sweet Apple Acres.

According to Granny Smith, the Apple family gathers for a reunion at Sweet Apple Acres once every 100 moons, as shown in Apple Family Reunion. There are races, apple snacks, a hay ride around the farm, and a family photograph is taken. More names and ponies appear at the reunion; named are Granny Smith's Auntie Applesauce and cousin Apple Rose, as well as three others, Apple Dumpling, Apple Leaves, and Half Baked Apple, along with the already-established names Apple Tart and Golden Delicious. Also seen at the reunion is Hayseed Turnip Truck, who is part of the family photo and also photographed helping rebuild the barn with Big McIntosh. Absent from the reunion but present in a past family photo is "Apple Bud". Present at the reunion in at least one shot but absent from the family photo are "Apple Bottom", "Apple Bread", "Apple Slice", Cherry Berry, Cloud Chaser, "Cinnamon Sugar", "Dosie Dough", Emerald Green, Fiddly Twang, "Flounder", Full Steam, "Gingerbread", Golden Harvest, Mr. Greenhooves, Helia, "John Bull", "Kazooie", Lucky Clover, Meadow Song, Orange Swirl, "Pitch Perfect", "Pomegranate", "Princess Erroria", Shoeshine and Sweetie Drops; "Apple Bread" is photographed at a picnic table with Apple Bloom, Big McIntosh and Applejack, Orange Swirl appears without her wings or cutie mark, Emerald Green appears with wings, "Princess Erroria" mostly appears without her wings, and Fiddly Twang, "Kazooie" and "Pitch Perfect" wear parts of the same costumes as in Luna Eclipsed.

Sweet Apple Acres is the family farm/orchard located near Ponyville, home to Applejack, Big McIntosh, Apple Bloom, and Granny Smith. Sweet Apple Acres has a large apple orchard, as seen in Applebuck Season. Aside from apples, corn and carrots are also grown and harvested. In Spike at Your Service, Spike counts exactly 24,567,837 blades of grass throughout Sweet Apple Acres.

In Twilight Sparkle and the Crystal Heart Spell, Buttercream is mentioned as one of Princess Cadance's old friends.

If it wasn't for THE APPLE FAMILY, Ponyville wouldn't exist! They're the ponies who founded it way back in the day. The Apples wandered around Equestria, snatching up seeds wherever they could find them. They were hoping to settle down someplace nice but hadn't found a place to do it. As a kindness, Princess Celestia gave the Apples a patch of land near the Everfree Forest, where Granny Smith found the very first zap apple. She started making her famous zap apple jam, and soon enough, ponies from all over were stopping by to scoop up some. Sweet Apple Acres was born and has been the heart of Ponyville ever since. 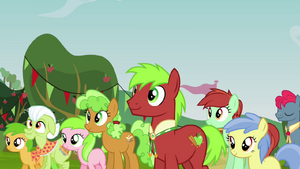