Applebuck Season is the fourth episode of the first season of My Little Pony Friendship is Magic. In this episode, Applejack attempts to harvest the apple crop in Sweet Apple Acres by herself because her brother, Big McIntosh, is injured. However, her stubbornness and sleep deprivation cause problems all over Ponyville. Hasbro started packaging a DVD of this episode with certain pony toys in January 2012.[2]

Originally, the episode involved Applejack losing acuity from “applebumping”, using her head to bump apples off trees. “Applebumping” was replaced with "applebucking" (kicking the trunk of apple trees to knock the apples off the trees).[3] Long before the episode reached the animation process, a scene where Applejack attempts to help Rarity was cut because it was repetitive and took up too much time. According to writer Amy Keating Rogers, that scene was cut by the second draft.[4][5]

The most dependable of ponies

At Sweet Apple Acres, Applejack and Big McIntosh survey the huge apple harvest awaiting them. With Big McIntosh injured, Applejack decides to harvest the crop of apples by herself, despite her brother's warning that it's a huge task for just one pony.

When Applejack is bucking apple trees, she sees a herd of cows stampeding towards Ponyville. She diverts the stampede from Ponyville in the nick of time with the help of her dog Winona. Impressed by Applejack's loyalty and reliability, the citizens host a ceremony in her honor. Twilight Sparkle tries to give a speech, but she is interrupted by Rainbow Dash, Pinkie Pie, and Fluttershy—who express happiness at the prospect of working with Applejack on various tasks in the near future—as well as Mayor Mare who steps up to deliver a short speech of her own. A visibly exhausted Applejack arrives late to the ceremony to collect her trophy. She has bags under her eyes and yawns frequently.

Later on, Twilight goes to the apple farm to find Applejack. Applejack explains that "Applebuck Season" is when the apples must be harvested. When Twilight asks about her relatives, Applejack says that they only stayed at Sweet Apple Acres for the family reunion and are too busy harvesting their own crops. Twilight offers to help, but Applejack stubbornly refuses.

Applejack, having promised to help out her friends, shows up late for her appointment with Rainbow Dash. Applejack's task is to jump from a platform onto one end of a catapult, launching Dash into the air to practice flips and spins. Her vision blurry from fatigue, Applejack keeps missing her end of the catapult. She lands on the catapult in one last attempt, but the unprepared Dash is sent flying and crash-lands on the Golden Oak Library balcony. Twilight guesses that Applejack is involved and returns to Sweet Apple Acres to offer help. Applejack has difficulty hearing after hitting her head on a branch, but still declines.

Later, Applejack bakes muffins with Pinkie Pie at Sugarcube Corner while Mr. and Mrs. Cake are away. Applejack's fatigue causes her to misunderstand her friend's instruction, and she substitutes potato chips for chocolate chips, regular soda for baking soda, a cup of sour lemon juice for a cup of flour, and earthworms for wheat germ. When the muffins are baked, Pinkie Pie hands them out to a crowd of ponies, one of whom is Derpy. She exclaims "Muffins!", making it her first line on the show, though Minuette's and Sea Swirl's mouth movements also match the line.

The scene wipes into a sick-tent where many ponies lie sick from eating the baked goods, which Pinkie Pie calls "baked bads." Spike, however, gleefully eats the discarded muffins, even one with a wriggling worm in it. Once more, Applejack refuses Twilight's help. Twilight is annoyed at Applejack for being "as stubborn as a mule", and says "No offense" to a nearby mule.

For her final task, Applejack meets Fluttershy in the forest to help round up baby rabbits for Fluttershy's bunny census. Fluttershy tells Applejack to be gentle, but Applejack's rough attitude and Winona's barking frighten the bunnies. Applejack and Winona corner the terrified bunnies, who freak out and stampede into Ponyville, where they eat most of the town's plants, ruin the town’s gardens, and make Fluttershy's census impossible to finish. Seeing this, Twilight decides enough is enough and goes to confront Applejack once and for all.

At the orchard, Twilight tells Applejack that her stubbornness caused as many problems with her friends as with her and that she really needs help. Applejack thinks she's finally finished harvesting, but Big McIntosh arrives to point out that she has only harvested part of the apples. Applejack faints from shock and exhaustion. When she regains consciousness, Twilight tells her that, although she respects the Apple family ways, Applejack must put "a little of [her] stubborn pride aside".

Applejack finally gives in and asks for her friends' help, which makes the harvesting more efficient. When the friends take a break, Applejack serves them apple juice, thanking them and apologizing for being so stubborn. Twilight realizes that it is just as okay to accept help from friends as it is to give help. Spike comes by to offer them the worm-filled muffins he found in the garbage, and the disgusted ponies walk off as the episode ends.

Applejack: Boy howdy! I got my work cut out for me. That there is the biggest bumper crop o' apples I ever laid eyes on.
Big McIntosh: Eeyup. Too big for you to handle on your own.
Applejack: Come on, big brother! You need to rest up and get yourself better. I haven't met an apple orchard yet that I can't handle. Oops, sorry. I'll take a bite out of this job by day's end.
Big McIntosh: Biting off more than you can chew is just what I'm afraid of.
Applejack: Are you sayin' my mouth is makin' promises my legs can't keep?
Big McIntosh: Eeyup.
Applejack: Why of all the... This is your sister Applejack, remember? The loyalest of friends and the most dependable of ponies?
Big McIntosh: But still only one pony, and one pony plus hundreds o' apple trees just doesn't add up to...
Applejack: Don't you use your fancy mathematics to muddy the issue! I said I could handle this harvest and I'm gonna prove it to you. I'm gonna get every last apple out of those trees this applebuck season all by myself. [gulps]

Rainbow Dash: Applejack, what the hay is going on? I mean, I thought I was working with "Ponyville's best athlete".

Twilight Sparkle: AJ, I think you're beating a dead... tree.
Applejack: I knew that.

Twilight Sparkle: Ugh. That pony is as stubborn as a mule. [aside] No offense.
Mule: None taken.

Rose: The horror, the horror.
Lily Valley: It was awful.
Daisy: A disaster. A horrible, horrible disaster.
Twilight Sparkle: I don't get it. 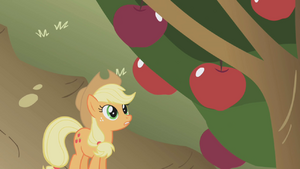