Applejack's "Day" Off is the tenth episode of season six of My Little Pony Friendship is Magic and the one hundred and twenty-seventh overall.

In this episode, Rarity tries to get Applejack to relax at the Ponyville Day Spa while Twilight and Spike handle Applejack's chores for her.

In production order, this is season six episode eleven.[1]

The episode's premise was conceived on December 9, 2014. The original script outline was written on January 15, 2015. The script's first and second drafts were respectively written on February 4 and 26, and polished on March 20 and 27. The final script was polished and approved on March 31 and locked on April 7.[2]

IMDb credited Jason Simpson as the voice of "Spa Pony" in this episode more than a month prior to the episode's premiere.[3]

The scene when Rarity and Applejack meet Rainbow Dash at the spa reappears in Deep Tissue Memories.

The scene when Applejack explains her methods to Twilight, Spike, and Rarity reappears in Harvesting Memories.

The episode opens at the Ponyville Day Spa, with Rarity enjoying some time in the steam room. Aloe, one of the spa employees, enters and warns Rarity not to stay in for too long or else she might get pruney. Rarity explains that she is waiting for Applejack to arrive, as it has been some time since their last spa day together.

Unfortunately, Applejack has spent so much time on her chores that, by the time she finally arrives, the spa is about to close up for the day, and Rarity's face has pruned beyond recognition.

Some time later, Rarity meets up with Twilight Sparkle and Spike on their way to Sweet Apple Acres to pick up some fresh pies. She explains to the two about her troubles bringing Applejack out on a spa day and how extra busy Applejack is lately with her chores. They meet Applejack at the farm, and Applejack expresses how sorry she is about her chores taking up all of her time. She even adds that Apple Bloom, Big McIntosh, and Granny Smith are unable to lighten her workload due to having chores of their own.

With this in mind, Twilight offers to help on the farm with Spike so Applejack and Rarity can have their spa day. Applejack is reluctant at first, but she soon gives in and grants Twilight and Spike one hour to complete one chore: feeding the pigs. She gives them a detailed step-by-step checklist on how to carry out the task.

As Applejack and Rarity make their way to the spa, Applejack worries a little about Twilight and Spike's ability to handle farm work, but Rarity assures her that they can handle an hour's worth.

Upon arriving at the spa, the two discover Rainbow Dash about to have her own spa treatment—though Rainbow desperately tries to play it off. Unfortunately for all three ponies, service at the spa is backed up. Despite Applejack's excitement for having a relaxing steam, the wait line for the steam room is considerably long. Aloe explains this is because the steam room has been taking longer to fill with steam lately, causing the spa to start providing customers with hot towels.

Using her labor expertise, Applejack traces the low steam problem to a pipe leak. The leak causes low steam pressure, leading to a longer wait time for the steam room, and providing customers with hot towels uses up the spa's hot water that would normally be used to create steam, thus forming a never-ending cycle. Unwilling to leave things as they are, Applejack steps in to fix the dilemma, despite only the hour of time she and Rarity have before returning to the farm.

Thanks to Applejack's efforts, the spa is once again at quality efficiency, and the employees even have less loads of laundry to do. However, Applejack and Rarity have no more time left for their spa day. Rarity briefly chastises Aloe for failing to check for leaks, and Aloe confesses that they had gotten so used to the way things were, they were unable to see any problems.

"You obviously need an outside eye to evaluate the situation."
— Rarity

Back to the farm

Still concerned about Twilight and Spike's progress, Applejack and Rarity stop by the farm to check in on them before resuming their spa day. They arrive to the sight of Twilight and Spike dangling corn over the pigpen, as was stipulated in the checklist Applejack provided them with. Applejack takes over for the two and admits that a list doesn't always convey the proper method of doing something.

As Rarity voices her disappointment in the spa day she and Applejack had, Applejack does a series of bizarre steps in order to feed the pigs, such as opening and closing the pen gate, babbling crazily at the pigs, and clucking like a chicken. While doing this, she expresses the sentiment of one getting stuck in a routine that puts extra, unnecessary work on oneself.

When Applejack's friends question her method for feeding the pigs, she explains that each step serves a purpose in addressing a possible problem. However, as Applejack herself points out, she had solved these problems long ago and therefore fell into her own unbreakable routine. With her friends' help, Applejack manages to streamline her chores and cut out the unnecessary steps through which she does them, thus giving her more free time.

"Having a friend look at what you're doing with an outside eye can really help!"
— Twilight Sparkle

With the extra free time given to her, Applejack decides to have a real spa day with Rarity, and she very much looks forward to an afternoon of relaxation. At the spa, the two encounter Rainbow Dash once again after she has had a session of pampering. After a bit of playful teasing, Applejack and Rarity invite Rainbow to join them, and she "reluctantly" accepts.

Rarity: Good heavens, that's a lot of empty pie plates.
Spike: Uh... yeah. We were just heading to pick up some fresh pies. Heh. I don't know why we keep running out at the castle.

Rainbow Dash: I just came in for a deep tissue sports massage.
Spa Pony: Ah, Miss Dash, I am so sorry, but we are running just a tad behind, and we are not quite ready to start your pampered muscle massage and indulgent hooficure just yet.
Rainbow Dash: Oh! [chuckles nervously] I-I'm pretty sure that wasn't what I signed up for.
Spa Pony: But they are your usual.

Spoiled Rich: Without steam, a steam room's just a room, and I've got plenty of those at home. Because I live in a mansion.

Rarity: Honestly, how in Equestria did it never occur to you to check for leaks?
Aloe: There's just so many other things to worry about! I suppose ve get used to the vay things are, and we don't realize there vas problem.
Rarity: You obviously need an outside eye to evaluate the situation. It's lucky for you Applejack is too stubborn to relax!

Applejack: Sometimes the simplest things can just derail a whole operation. [babbles] Whether it's a leaky pipe or doin' too much laundry. You can't just stick to the same old way of doin' things and expect them to get better. [clucking] I mean, thinkin' you can is just plumb ridiculous. Right? [short laugh] It's funny when you realize the extra work they were doin' was actually makin' things worse!

Applejack: I guess I just got so used to doin' everythin' a certain way, I didn't realize there were any problems.
Twilight Sparkle: Having a friend look at what you're doing with an outside eye can really help!

Rainbow Dash: Sometimes a girl just has to pamper herself, am I right?
Rarity: You certainly are! 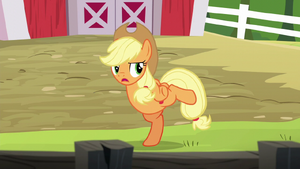