Appleloosa is a western town in Equestria that is first featured in the episode Over a Barrel and makes minor appearances and mentions in later episodes. It is the hometown of Applejack's cousin Braeburn. The name of the town comes from the Appaloosa breed of horse. Its name is spelled as "Appleoosa" in Appleoosa's Most Wanted, in a Hasbro Studios My Little Pony Friendship is Magic video,[1][2] and in some merchandise, as "Appleloosa"/"Apple Loosa" in other merchandise and depictions, and as "Appaloosa" in a February 1, 2014 tweet by Amy Keating Rogers[3] and in closed-captions both of Over a Barrel and of Appleoosa's Most Wanted.

Appleloosa is first mentioned and featured in Over a Barrel. Applejack and her friends take a train there to deliver Bloomberg, one of Applejack's favorite trees, as a gift to her Appleloosan relatives. As a result, they get drawn into a long-standing dispute between the settler ponies and the buffalo tribe.

When Applejack and friends arrive in Appleloosa, Applejack's cousin Braeburn gives them the grand tour, explaining that the town was built in less than a year. The town includes a saloon called the Salt Block, a clock tower, a stage for musical performances, and acres of apple orchard, and has some of what Braeburn calls the "finest comforts" such as horse-drawn carriages, horse-drawn horse-drawn carriages, wild west dances, and mild west dances. The town is governed by Sheriff Silverstar.

Due to the town's location, the Appleloosans are locked in conflict with a tribe of buffalo led by Chief Thunderhooves. The buffalo wish for the ponies to remove the apple orchards from their traditional stampeding grounds, but the ponies refuse out of a need to feed their town and families. When the Mane Six fail to help the two sides reach a compromise, the conflicts escalates to war. During the conflict, Chief Thunderhooves is downed by a stray apple pie. Upon sampling its delicious taste, he decides to allow the ponies to keep the land in exchange for a share of their apple pies. In return, the Appleloosans create a road through the orchard for the buffalo to stampede through.

Appleloosa is mentioned in Apple Family Reunion as one of the places in Equestria from which Apple family members have RSVP'd to come to the reunion at Sweet Apple Acres. In the episode Bats!, Applejack cultivates a giant apple for the Appleloosa State Fair.

The town briefly appears at the beginning of Pinkie Pride, where the ponies and buffalo enjoy a party thrown by Cheese Sandwich.

It is mentioned by Applejack in The Cutie Map - Part 2. The town is featured in Appleoosa's Most Wanted and Buckball Season.

In Shadow Play - Part 2, the Appleloosian Wastes are mentioned as one of the Pony of Shadows' possible hiding places.

In Common Ground, a buckball stadium and museum are shown to have been built within Appleloosa, with the stadium hosting the Buckball Championship.

In Growing Up is Hard to Do, Appleloosa holds a County Fair, which the Cutie Mark Crusaders wish to attend. After being magically transformed into grown-up ponies, they get to enjoy the festivities, and encourage two ponies named Spur and Biscuit to enter their pet Bloofy in the pet show, which leads to a near-disaster.

In My Little Pony Equestria Girls: Friendship Games, Appleloosa appears in one of the dimensional rifts opened by Midnight Sparkle.

In My Little Pony: Friendship is Magic Issue #2, the map of the lands south of Equestria names the "Appaloosan Mountains" south of Appleloosa.

Appleloosa is featured in the chapter books Lyra and Bon Bon and the Mares from S.M.I.L.E. and The Stormy Road to Canterlot. 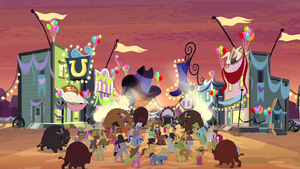