My Little Pony Friendship is Magic Wiki
Register
Don't have an account?
Sign In
Advertisement
in: Earth ponies, Male characters, Elders,
and 2 more

Junior deputy Star Spur and senior deputy Fetter Keys are Sheriff Silverstar's deputy sheriffs in Appleoosa's Most Wanted. Star Spur has a bluish gray coat, two-tone black mane and tail, blue eyes, and a cutie mark of a blue star and white shooting star. Fetter Keys has a yellow coat, orange mane and tail, green eyes, and a cutie mark of a key ring. They are unnamed in the show, "Fetter Keys" being a placeholder name, but they are named varyingly in merchandise and other depictions.

According to series character designer and season five art director Rebecca Dart, Fetter Keys' design was inspired by actor Don Knotts.[1] Character designer Kora Kosicka "didn't base either of them on anyone in particular".[2]

Star Spur and Fetter Keys appear in the season five episode Appleoosa's Most Wanted as Sheriff Silverstar's deputy sheriffs of Appleloosa. The two deputies work together with Silverstar to keep Appleloosa safe from the "notorious outlaw" named Trouble Shoes.

Some time during the episode, Silverstar beats the two deputies at a card game, and Applejack and Braeburn inform them that Trouble Shoes kidnapped the Cutie Mark Crusaders. Upon locating Trouble Shoes, Silverstar and the deputies place him under arrest and escort him to jail. The deputies are last seen when Trouble Shoes takes responsibility for his actions and accepts his punishment.

In Fame and Misfortune, Star Spur appears at Sweet Apple Acres with an apple-themed cutie mark taped over his real one.

In the Equestrian Odysseys expansion set of Enterplay's collectible card game, Star Spur is named on card #33 C, which lists the quote "Do you have a permit to carry that pie? I think the sheriff will wanna hear about this..."

"Do you have a permit to carry that pie? I think the sheriff will wanna hear about this..."
— Star Spur, Enterplay collectible card game Equestrian Odysseys card #33 C of Star Spur

"You have the right to remain silent. Anything you say can and will be used against you by an angry mob of Appleoosans."
— Star Spur, Enterplay collectible card game Equestrian Odysseys card #169 U, Under Arrest 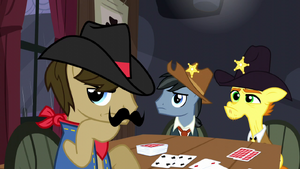