Appleoosa's[sic] Most Wanted is the sixth episode of the fifth season of My Little Pony Friendship is Magic and the ninety-seventh episode overall. The title is a parody of the reality series America's Most Wanted.

In this episode, the Cutie Mark Crusaders try to bring an infamous outlaw to justice in hopes of earning their cutie marks.

"Yuma Spurs" and Trouble Shoes' Cabin were previewed in different ones of the animation images shown at Ponycon NYC on February 16, 2015.[1][2]

On March 3–5, 2015, an unofficial My Little Pony: Friendship Is Magic[sic] season 5 episode listing on IMDb titling the sixth episode as "Brother, Can You Spare a Duck?" was discredited by Jim Miller.[3][4][5][6]

The episode opens in Appleloosa, with the town set up for the Appleloosa Rodeo. The Cutie Mark Crusaders are excited to watch Applejack compete, and they even consider entering one of the rodeo events to try and earn their cutie marks. However, they notice Sheriff Silverstar and his deputies increasing security, mentioning that a "low-down varmint" may make an appearance during the rodeo. In the shadows, a large figure leaves a distinctive horseshoe imprint in the dirt.

Applejack practices for the rodeo's hay bale stacking event, taking her cousin Braeburn's place after he injured one of his hooves. Braeburn briefly loses sight of the Crusaders after promising Applejack that he'd look after them. When the fillies return with rodeo souvenirs, Applejack scolds them for going off on their own.

As Apple Bloom asks Applejack if she and her friends can compete in some rodeo events, a tall stack of hay bales suddenly tips over, nearly injuring all the ponies present. Sheriff Silverstar finds a horseshoe imprint in the dirt and deduces this to be the work of an infamous outlaw named Trouble Shoes.

Upon hearing that Trouble Shoes—wanted for ruining several other rodeos across Equestria—has come to Appleloosa, the townsponies are whipped into a nervous frenzy. Silverstar considers cancelling the rodeo, but refusing to be intimidated, he doubles his security patrols and declares that the rodeo will go on as planned. With a dangerous outlaw on the loose, Applejack almost sends Apple Bloom, Sweetie Belle, and Scootaloo home to Ponyville and even contemplates going with them. However, Braeburn encourages Applejack to stay and compete in the rodeo, and he promises to keep a watchful eye over the Crusaders.

Hours later, after Braeburn has fallen asleep, the fillies sneak out into the woods to find Trouble Shoes. Apple Bloom and Scootaloo reason that, with Trouble Shoes behind bars, they'll be able to compete in the rodeo and get their cutie marks. Despite her uncertainty about the idea, Sweetie Belle goes along with them. Unfortunately, the fillies quickly become lost, and it starts to rain.

Braeburn informs Applejack about the Crusaders' disappearance, and the two go to alert Sheriff Silverstar, worried that Trouble Shoes abducted them. Silverstar, his deputies, Applejack, and Braeburn set off into the rain to find the missing fillies.

Meanwhile, Apple Bloom, Sweetie Belle, and Scootaloo—still lost in the woods—find a seemingly abandoned mobile cabin and use it to take shelter from the pouring rain. Suddenly, they're visited upon by a large shadowy figure. They scream in fear, startling the figure into clumsily knocking into things and falling over. The Crusaders' would-be assailant turns out to be a tall yet unassuming Earth pony stallion.

The Crusaders soon realize that Trouble Shoes means no harm and that he's only a victim of bad luck, indicated by his cutie mark of an upside-down horseshoe. He tells the fillies to leave before his bad luck spreads to them, but when they admit they don't know the way back to Appleloosa, Trouble Shoes offers to lead them there.

The Crusaders wonder why Trouble Shoes, having a reputation as an outlaw, is being so nice to them, and Trouble Shoes tells them the story of how he got his cutie mark.

When he was a colt, Trouble Shoes wanted to be a rodeo star but kept publicly embarrassing himself in his attempts. During his audition for rodeo school, he got his cutie mark and humiliated himself in front of the judges. Though he abandoned his dreams, Trouble Shoes still liked to watch the rodeo, but his bad luck caused mishaps every time. Since then, he's considered bad luck to be his "lot in life."

The Crusaders realize that Trouble Shoes has been looking at his cutie mark all wrong and that he could still make a name for himself as a rodeo clown. However, before they could share this revelation with him, Sheriff Silverstar appears with the others to place him under arrest.

The new rodeo clown in town

The next day, the Crusaders plead Trouble Shoes' innocence to Applejack, but she refuses to listen because of his supposed abduction of the fillies the night before. She leaves to compete in the rodeo's hay bale stacking event. At the sheriff's office, the Crusaders lure Silverstar away and free Trouble Shoes from his jail cell, saying that they're going to help him live his dream.

On the rodeo grounds, after Applejack wins the hay bale stack, the rodeo clowns take the field. The Crusaders encourage Trouble Shoes—wearing clown clothes and makeup—to join them. Trouble Shoes is certain his cutie mark represents bad luck, and the Crusaders assure him that it doesn't have to. With their encouragement, Trouble Shoes joins the other clowns. Despite his usual clumsiness, his antics are met with laughs and positive reception.

During his performance, Trouble Shoes accidentally reveals his identity to the crowd, and the ponies of Appleloosa quickly turn on him. The Cutie Mark Crusaders stand up for him, asserting that his past mistakes were just accidents, and some of the ponies admit that he is a talented clown. Trouble Shoes apologizes for all the trouble he's caused and agrees to take responsibility for it.

The Crusaders admit that Trouble Shoes wasn't responsible for abducting them the previous night. As punishment for wandering off on their own again, Applejack has them clean up the rodeo grounds. Though they are returning to Ponyville as blank flanks, the Crusaders do feel pride for helping Trouble Shoes realize what his cutie mark really means.

Scootaloo: Once he's in jail, we'll be competing! And then it's-
Apple Bloom and Scootaloo: Cutie mark city!
Sweetie Belle: Worst idea ever.

Applejack: Braeburn? Where are the girls?
Braeburn: [nervous laugh]
Applejack: [echoing] What?!

Scootaloo: Um, we don't really know the way back to Appleloosa...
Trouble Shoes: But o'course I do... Wouldn't you know it, my lucky day.

Sheriff Silverstar: Trouble Shoes, you're under arrest for vandalizin' the property and peace of mind of the good rodeo-lovin' ponies of Equestria! Not to mention fillynappin'! And... generalized mayhem!

Trouble Shoes: [sighs] Well at least I get me a view of one small corner of the rodeo.
[bed creaking, crash]
Trouble Shoes: Figures.
Sheriff Silverstar: Aw, come on now, Trouble Shoes, I'm runnin' out of mattresses!

Applejack: There y'all are! How 'bout your big sis, huh?
Apple Bloom: [flatly] Yeah, way to go. 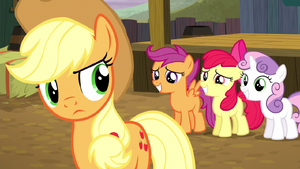