Aria Blaze is a female siren and one of the main antagonists in My Little Pony Equestria Girls: Rainbow Rocks. She is a backup singer in her band the Dazzlings, rivaling the Rainbooms.

Like those of her bandmates Adagio Dazzle and Sonata Dusk, Aria Blaze's fin-like wings are translucent and non-feathered. Her non-siren forms resemble Starlight Glimmer and Evening starlite.

Aria Blaze appears alongside Adagio Dazzle and Sonata Dusk in Rainbow Rocks as the main antagonists.

In the film, Aria and the other Dazzlings are introduced in the human world. They are sirens from Equestria who were banished to the human world by Star Swirl the Bearded to keep them from using their dark magic to conquer Equestria. They are first seen in a café causing tension between the patrons, and Aria grumbles about the world's lack of satiating magic. Later, when Sunset Shimmer gives a school tour to Aria and company and mentions the musical showcase, Aria states that they sing "from time to time." She and the Dazzlings later convince the students with their music to turn the friendly Musical Showcase into a Battle of the Bands.

Aria and the Dazzlings use their siren's songs to control the students' opinion and advance through the competition bracket. In the final battle against the Rainbooms, Aria and the Dazzlings are eventually defeated, and the gem pendants with which they controlled the students are destroyed. As a result, their inability to sing leads to them being chased off in disgrace.

Aside from flashbacks, Aria's true form is never physically shown in the film, but she and her fellow band members gain pony-like ears, extended ponytails, and translucent fin-like wings. They also summon astral projections of their true siren forms from their pendants. Aria is also the only member of the Dazzlings who is not referred to by name in the film, although Sonata refers to her by name in the novelization.

A drawing of Aria's siren form is briefly seen in Friendship Games during the CHS Rally Song. Her siren form can also be seen in one of the human Twilight Sparkle's photos.

Aria Blaze, alongside Adagio Dazzle and Sonata Dusk, make their return in the music video Find the Magic, performing at the Starswirled Music Festival and singing about adjusting to life without their magic.

Aria and her fellow Dazzlings return in Sunset's Backstage Pass as performers at the Starswirled Music Festival. Sunset suspects them as the cause of the time loop, especially after hearing Aria mentioning "the loop", but this is later revealed to be a misunderstanding. Aria offhandedly remarks that if there is Equestrian magic on the loose, she and the Dazzlings call dibs.

Aria is mentioned by Pinkie Pie at the start of the "Saving Pinkie's Pie" short.

In the season seven episode Shadow Play - Part 2, Aria and her fellow sirens appear in flashback, creating discord among ponies with their singing, before they were defeated by the Pillars of Old Equestria and banished by Star Swirl the Bearded.

A doll of Aria Blaze has been displayed, with packaging additionally showing her and Sonata Dusk's pony versions, at the 2014 American International Toy Fair[3] and on Hasbro's online listings of the product.[4]

Aria appears alongside Adagio and Sonata in their siren forms in My Little Pony: FIENDship is Magic Issue #3 facing off against Star Swirl the Bearded and in My Little Pony: Legends of Magic using their hypnotic singing on Stygian's village before being defeated and banished by the Pillars of Old Equestria.

Aria Blaze is featured in the Rainbow Rocks screenplay novelization The Mane Event and Panorama Sticker Storybook and appears again in Make Your Own Magic: Starswirl Do-Over.[6]​[​specify​]​

She’s spirited and sassy and never too shy to speak her mind, but when Aria Blaze takes the stage, her captivating voice is all anyone hears. She works magic at the mic, helping the Dazzlings live up to their name.

Aria Blaze is a member of the trouble-making band, the Dazzlings. Even though Aria doesn't play nice on stage, she still has a rockin' sense of style. This fashion star is about to meet her match! [7]

Aria Blaze is portrayed as being more level-headed than her companion Sonata Dusk and often speaks in a rather bored disposition. Throughout the film, she is shown to be just as cold and manipulative as her leader Adagio Dazzle, convincing Trixie into removing the Rainbooms from the competition and joining Adagio in undermining Sunset Shimmer's confidence. She would question Adagio's plans and thinks about being in charge when she suggested Sonata to follow her lead, much to Adagio's anger. Aria also frequently argues with Sonata, occasionally calling her "the worst" and disagreeing with her over trivial matters.

"We have been known to sing from time to time."
— My Little Pony Equestria Girls: Rainbow Rocks

"So we're just gonna do what we always do? Stir up some trouble and then feed off the negative energy? Some plan, Adagio."
— My Little Pony Equestria Girls: Rainbow Rocks

"But the Rainblossoms, or whatever they're called, aren't under our spell. How exactly are we supposed to get to their magic?"
— My Little Pony Equestria Girls: Rainbow Rocks

"It's not my job to not start fires."
— My Little Pony Equestria Girls: Sunset's Backstage Pass

"I'm kinda busy right now. Can I ignore you some other time?"
— My Little Pony Equestria Girls Rainbow Rocks - The Mane Event

"Remember when I asked for your opinion? Yeah. Me neither."
— My Little Pony Equestria Girls Rainbow Rocks - The Mane Event 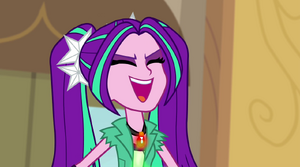