Aunt Holiday and Auntie Lofty are an Earth pony and Pegasus romantic couple and the aunts of Scootaloo. They first appear in the chapter book Ponyville Mysteries: Riddle of the Rusty Horseshoe, and they make physical appearances in My Little Pony: Ponyville Mysteries Issue #3 and the season nine episode The Last Crusade.

Holiday and Lofty were co-created by series writers Michael Vogel and Nicole Dubuc; their inclusion in the series was a collaboration between them and fellow writer Josh Haber. Their initial introduction in the Ponyville Mysteries book series was approved by Hasbro.[1] Holiday and Lofty are confirmed by Vogel to be a lesbian couple.[2][3]

Like Rolling Thunder and her brother Snap Shutter, Aunt Holiday speaks with an Australian accent.

In the season nine episode The Last Crusade, Holiday and Lofty appear as occasional guardians to Scootaloo, taking turns looking after her with other adults around Ponyville during her parents' absence. When not looking after Scootaloo, they live in a house several train stops away from Ponyville. When Lofty lacks the inspiration to give the quilt she is knitting a theme, the Cutie Mark Crusaders offer multiple ideas. Lofty later takes inspiration from their stories of helping ponies find their purpose, and she makes a Cutie Mark Crusaders-themed quilt.

Near the end of the episode, during Cutie Mark Crusader Appreciation Day outside Ponyville Town Hall, Holiday and Lofty join all the ponies speaking out on the Crusaders' behalf, explaining to Scootaloo's parents Snap Shutter and Mane Allgood that the Crusaders have a special purpose that only they can do. When Snap and Mane let Scootaloo stay in Ponyville instead of forcing her to move to Shire Lanka with them, Holiday and Lofty buy Snap and Mane's house and move to Ponyville so that Scootaloo can live with them.

In The Ending of the End - Part 2, Lofty briefly appears taking shelter with Scootaloo and other Pegasi in Cloudsdale as the city closes itself off from the other pony races.

Holiday and Lofty are first mentioned in an "interview" with Ponyville Mysteries author Penumbra Quill.[4]

In My Little Pony: Ponyville Mysteries Issue #3, Holiday and Lofty chaperone the Cutie Mark Crusaders' Filly Guides camping trip and teach them how to make a campfire treat called a sum'yum. When a mysterious fire breaks out at the Ponyville Retirement Village and the Crusaders try to figure out what caused it, Holiday and Lofty inadvertently give Scootaloo the clue she needs to solve the mystery.

Holiday and Lofty also appear in My Little Pony: Friendship is Magic Issue #93, their designs matching those of the show. In the issue, they support and encourage Scootaloo in her efforts to connect with her parents, mentioning that they themselves feel like Scootaloo's parents since they started taking care of her full-time.

In My Little Pony/Transformers II Issue #1, Holiday and Lofty are transported to the planet Cybertron in search of a missing Scootaloo. They meet the Autobots Arcee and Greenlight and team up with them to battle the Decepticon Killmaster, who had been brainwashed by King Sombra. After defeating him, they find Scootaloo racing with Gauge and several other Autobots.

Holiday and Lofty appear for the first time in Riddle of the Rusty Horseshoe, the third entry in the Ponyville Mysteries series of chapter books. It is revealed in the book that Holiday is the older sister of Scootaloo's father and that she and Lofty look after Scootaloo while her parents are away "most of the time".

Holiday and Lofty are available as obtainable characters in the Gameloft mobile game as of the June 2020 update.

Aunt Holiday: You three truly have a gift for helping ponies.

Auntie Lofty: Leave it to you three to come up with more ideas than I've had in a year! Now, that's talent.

Aunt Holiday: I left you plenty of healthy food for the weekend.
Auntie Lofty: And I left you cookies. [chuckles]

Aunt Holiday: Whether it's encouraging others to discover their special talent...
Auntie Lofty: ...or inspiring them to do what's in their heart...
Aunt Holiday: ...these three offer the town something no other pony can.

Auntie Lofty: Maybe you should've thought of that before you sold the house.
Aunt Holiday: Lofty, don't tease my brother.

Aunt Holiday: Now that we've learned the basics of a successful campout...
Auntie Lofty: ...it's time for the most important part. How to make a sum'yum.

Auntie Lofty: Did you find anything useful, Scootaloo?
Aunt Holiday: Personally, I think it's lucky you didn't get hurt! You girls should not be sneaking into places like that!

Auntie Lofty: Hey, slugger! What are you doing here?

Aunt Holiday: [to Lofty] Let me make Scootaloo some breakfast first, dear. Then you can give her the third degree. 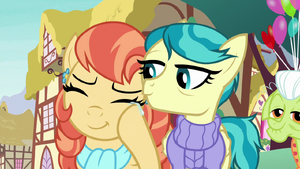