Aunt and Uncle Orange are the married Earth pony aunt and uncle of Applejack in the Apple family. They are simply called by their titles-and-shared-name Aunt Orange and Uncle Orange both in The Cutie Mark Chronicles and in Gameloft's mobile game, while the latter Orange is called by that as well as his individual name Mosely Orange in various merchandise.

IDW comics writer Ted Anderson has stated regarding the My Little Pony Annual 2013 Equestria Girls story "Since my original plan was to retell 'The Cutie Mark Chronicles' in EqG form, I wanted to reuse the characters from AJ's story, Aunt and Uncle Orange. However, it was pointed out that AJ being in the same school as her aunt and uncle was really friggin' weird! So that was nixed"[4] and "originally I wanted aunt and uncle Orange to be the antagonists for the book, but it was pointed out that being in the same grade as your aunt and uncle was ... well, odd. So Babs and her sister took over the roles instead (even though, as others pointed out, it's also odd to have Babs be in high school before AJ)."[5]

Aunt and Uncle Orange first appear in Applejack's flashback in The Cutie Mark Chronicles. When Applejack goes to Manehattan and is taken by her aunt and uncle, the two are amused by her country mannerisms and introduce her to the city's high society. As Applejack greets the social elite of Manehattan, Aunt Orange compliments her on her learned speech but later attempts to save face when Applejack embarrasses herself.

In Apple Family Reunion, Aunt and Uncle Orange appear at Sweet Apple Acres shortly before Raise This Barn, and they appear in the family photo at the song's end.

In Made in Manehattan, Aunt Orange walks at night with Babs Seed along a Manehattan street.

An Aunt Orange smoothie kiosk is briefly seen at the Canterlot Mall during Dance Magic.

My Little Pony Micro-Series Issue #6 cover A shows the back of Uncle Orange's head a square left of Applejack. On Micro-Series Issue #7 page 18, Aunt Orange makes a non-speaking appearance at the Ponyville Flea Market. On My Little Pony: Friends Forever Issue #8 page 21, Aunt and Uncle Orange appear in the post-story epilogue. On Friends Forever Issue #9 pages 2-3, the Oranges appear in line at Apple Con 45. In My Little Pony/Transformers Issue #4, Aunt and Uncle Orange are summoned to Sweet Apple Acres by Discord to help Applejack drive the Insecticons off the farm.

Aunt and Uncle Orange appear in the My Little Pony: Cutie Mark Quest adaptation of The Cutie Mark Chronicles.

Aunt and Uncle Orange appear together on WeLoveFine's fan-designed art prints "All Of Apple Acres" and "Apple Family Portrait", both of which are by the same artist, who has stated regarding the latter art print "yes the Oranges looked like this on the episode photo and I thought it was funny to keep them this way XD".[7]

AUNT ORANGE and UNCLE ORANGE are Applejack's family that live in Manehattan. They're city ponies who giggle at good ol' country folk. But that's okay. They're still family just the same.

"Don't worry. We'll have you acting like a true Manehattanite in no time."
— Aunt Orange, The Cutie Mark Chronicles 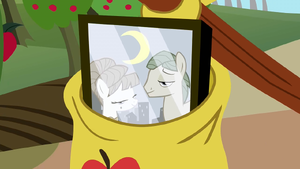 Retrieved from "https://mlp.fandom.com/wiki/Aunt_and_Uncle_Orange?oldid=2186091"
Community content is available under CC-BY-SA unless otherwise noted.