Aura is an Earth pony filly seen in several episodes engaging in activities with other foals. Aura has a lavender coat color, a turquoise mane and light turquoise eyes. She has a pillow cutie mark in Call of the Cutie, but no cutie mark in other episodes. She is unnamed in the show, only being referred to as "Girl Pony" in the credits of the episode Flight to the Finish, but she is named in merchandise.

Aura shares her design with "Noi" and "Piña Colada".

Aura first appears in Dragonshy, running through the park with "Mango Dash" and "Ruby Pinch". In Call of the Cutie, she appears in Cheerilee's class and at Diamond Tiara's cute-ceañera.

Aura also appears in Twilight Sparkle's vision of magic kindergarten in Lesson Zero as a unicorn. She makes another appearance in The Cutie Pox, watching Apple Bloom's loopty-hooping. In The Mysterious Mare Do Well, Rainbow Dash saves Aura from a well; she has her first speaking role in this episode. In The Super Speedy Cider Squeezy 6000, she gathers around Flim and Flam's machine when they first arrive at Sweet Apple Acres during cider season. In It's About Time, she appears in a crowd of ponies in Ponyville being instructed by Twilight to disaster-proof Equestria. In Ponyville Confidential, she reads a newspaper with "Noi".

In One Bad Apple, Aura appears watching the Summer Harvest Parade with other fillies. In Magical Mystery Cure, she appears singing on a rooftop with White Lightning and Parasol during A True, True Friend.

She has her second speaking role in Flight to the Finish. Aura appears again in Pinkie Pride, Simple Ways, Filli Vanilli, Twilight Time, and It Ain't Easy Being Breezies. In Leap of Faith, she appears as a Pegasus. She later appears in Inspiration Manifestation and Equestria Games.

Aura appears at Our Town in The Cutie Map - Part 1 and The Cutie Map - Part 2 and at Cranky Doodle Donkey and Matilda's wedding in Slice of Life. In Crusaders of the Lost Mark, she appears at the Ponyville Schoolhouse during The Vote and later helps assemble the new playground in the reprise of The Pony I Want to Be. In The One Where Pinkie Pie Knows, she makes a cameo appearance walking towards Daisy outside the Ponyville Schoolhouse after receiving a balloon animal from Pinkie Pie. In What About Discord?, she makes a cameo appearance sitting at a table at the Ponyville Café with Daisy.

In Forever Filly, Aura appears sitting with Liza Doolots in the audience for Claude's puppet show and later in line for Twisty Pop's balloon animals. In Parental Glideance, she appears in the audience for the Wonderbolts' showcase in Canterlot. In Fame and Misfortune, she appears as one of the foals gathered around the Cutie Mark Crusaders after they get popular at the Ponyville Schoolhouse due to the publication of the Mane Six's Journal of Friendship before later appearing at Sweet Apple Acres as Sweet Apple Admirer. In Secrets and Pies, she appears in Ponyville talking with Rainy Feather and Noi before Rainbow Dash spurs them into running by to eat Pinkie Pie's pies.

In Enterplay's collectible card game, Aura is shown on card α #136 C, Foal Free Press, and in the game's expansion set Canterlot Nights, Aura is named with a trademark symbol on her own card #39 C, which gives her the description "The variety of mischief this little filly gets into is practically endless."

On the DVD My Little Pony Friendship is Magic: Season Two Disc 2, which was released earlier than the collectible card game, the closed captions for the episode The Mysterious Mare Do Well refer to Aura by name.

"You're my hero, Rainbow Dash!"
— The Mysterious Mare Do Well 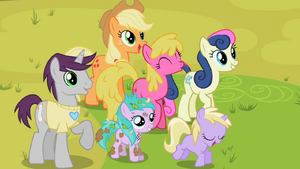