Autumn Blaze is a female Kirin who first appears as a supporting character in the season eight episode Sounds of Silence.

Autumn Blaze first appears meeting Applejack after Applejack and Fluttershy encounter the silent and emotionless Kirin of the Peaks of Peril. Unlike the rest of the Kirin, Autumn Blaze is very talkative, though she initially pretends otherwise to play a joke on Applejack. Through the song A Kirin Tale, Autumn explains to Applejack that the Kirin were once very sociable creatures. But after an argument and flared tempers (bringing about their Nirik forms) resulted in the accidental destruction of their village, they stepped through the Stream of Silence and suppressed their voices and emotions to prevent it from happening again.

Bored of being unable to talk and express herself, Autumn Blaze stumbled into a bed of foal's-breath flowers and brewed a tea that restored her ability to speak. She then tried numerous methods to talk to her friends and get them to talk back, but they rejected her, and the village leader Rain Shine forced her to choose between giving up her voice again or leaving the Kirin village. Autumn chose to leave, living by herself in a small cottage on the village's outskirts ever since.

When Applejack and Fluttershy argue over whether or not the Kirin should restore their voices, the Kirin carry them to the Stream of Silence to suppress their voices and emotions as well, but Autumn Blaze arrives in her Nirik form to save them. She expresses, both to Fluttershy and to her fellow Kirin, that anger is just another emotion and that what matters is what one does with them. She also expresses a desire to hear her old friends' jokes and songs again.

Persuaded by Autumn Blaze's words, the Kirin agree to restore their voices and emotions. After Applejack and Fluttershy locate more foal's-breath, Autumn Blaze makes her silence cure (via placing the flowers in the village fountain), and Rain Shine gratefully allows her to return to the village.

In The Ending of the End - Part 2, Autumn Blaze appears alongside her fellow Kirin, taking part in the final battle against Queen Chrysalis, Lord Tirek, and Cozy Glow. In The Last Problem, Autumn Blaze attends Twilight Sparkle's coronation ceremony. She also briefly appears in Applejack's group shot during The Magic of Friendship Grows.

Autumn Blaze:
Unlike her fellow Kirin, Autumn Blaze LOVES to talk! And sing! And act out one-Kirin stage plays! And have we mentioned she loves to talk?!
Nirik Autumn Blaze:
...Okay, we know this looks bad, but you should probably just wait for her to cool down!

Autumn Blaze is featured on page 35[1] of the My Little Pony Character Guide published by Orchard Books in the United Kingdom on September 6, 2018.[2]

Autumn Blaze is excitable, chatty, and eccentric. Having gone an extended period of time without anyone to talk to, she leaps at any opportunity to make new friends, chat, sing, and play practical jokes. She keeps several imaginary friends that she made out of inanimate objects and her own hooves and shadow to cope with her time in solitude. She also shows a tendency to mispronounce common words such as "while" and "process" because she has not used them for a long time.

"Gotcha! Sorry, sorry, but that was too good. Oh, you don't know how much I missed jokes. Hi-larity! Am I pronouncing that right? Some words I haven't said in a will. While! While."
— Sounds of Silence

"The way the light shimmers off everything, like, like it all suddenly woke up the moment you saw it. And you realize maybe the water and the mountains and the forest and the... yes, the rainbow and the stars and the sky are all looking back at you thinking the same thing? That we are a part of the everything. That maybe there's just one thing and we are all it."
— Sounds of Silence

"I'd rather... siiiiiiiiiiiing!"
— Sounds of Silence

"Seriously, there's only so long that Sudoku can keep you entertained!"
— Sounds of Silence

"Rainbows won't light up the sky unless you let it rain!"
— During A Kirin Tale, Sounds of Silence

"Did you name your shadow? Mine's called 'Silhouette Gloom of the Sundown Lands'."
— Sounds of Silence

"Well, yeah! Can't have them silence the only friend who'll speak to me."
— Sounds of Silence

"I guess anger's like other feelings. It's not about having them. It's what you do with them."
— Sounds of Silence

"Tell me everything, and feel free to add complicated descriptions and comedic tangents!"
— Sounds of Silence 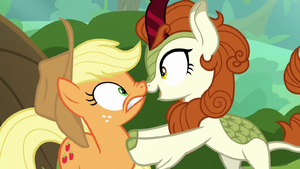