Babs Seed is a female school-age Earth pony and Apple Bloom's cousin from Manehattan. She is a former member of the Cutie Mark Crusaders, having gotten a cutie mark of a pair of scissors with apple-shaped handles, as revealed in Bloom & Gloom, and the founder of the Crusaders' Manehattan branch. She speaks with a heavy Bronx accent. She is called Sweetie Babs in some merchandise.

Her name is a play on words of the idiom "bad seed", which denotes an individual who behaves rudely and often brings misfortune to others.

Babs Seed is introduced in the episode One Bad Apple. She arrives at the Ponyville train station, where Apple Bloom introduces her to the other Cutie Mark Crusaders, who then show her their clubhouse and their giant pumpkin float for the Summer Harvest Parade. Diamond Tiara and Silver Spoon arrive shortly after and berate Babs for not having a cutie mark, which she seems self-conscious about. Babs often covers her blank flank with her short tail at the mention of a cutie mark. Ultimately, Babs starts to make fun of the Cutie Mark Crusaders, destroys their float, and joins Diamond Tiara and Silver Spoon. Diamond Tiara commends Babs' "big city attitude".

Babs then spends much of her time tormenting the Crusaders, who are scared of being "snitches" if they tell Applejack. In the song "Babs Seed", Babs chases and bullies the Cutie Mark Crusaders, who are doing their best to avoid her. Back at Sweet Apple Acres, Babs sleeps in Apple Bloom's bed, forcing her cousin to sleep on a bed of hay with a newspaper blanket. She later kicks the Cutie Mark Crusaders out of their clubhouse, turning it into a hangout for Diamond Tiara and Silver Spoon. The Crusaders resolve to get revenge, and secretly rebuild the float the night before the Summer Harvest Parade.

On the day of the parade, Babs is successfully lured onto the booby-trapped float and begins to ride it down the street. The Crusaders are horrified to find out from Applejack that Babs was bullied in Manehattan for not having her cutie mark, which is why Babs herself turned to bullying to avoid becoming a victim again. After Babs is rescued from the sabotaged float, the four make amends, and Babs joins the Cutie Mark Crusaders, becoming the official fourth member of the Cutie Mark Crusaders. At the train station, she tells Applejack that she will talk to her older sister about the bullying when she gets back to Manehattan. Babs also promises to start the Manehattan branch of the Cutie Mark Crusaders. Before boarding the train, she stands up to Diamond Tiara and Silver Spoon when they start teasing the Crusaders again and manages to effectively subdue them, which Sweetie Belle says makes her a true "Bad Seed" (in a good way).

Babs makes her second appearance in Apple Family Reunion. Apple Bloom is overjoyed that she RSVP'd for the reunion, and the two greet each other warmly upon her arrival, calling each other their "favorite cousin". The two start up a conversation about Babs' new school, but Applejack interrupts by having them compete in an obstacle course of her own design. They try during each leg of the course to talk (during which it's learned that Babs has followed through on her initiative to try and recruit foals for the Manehattan branch of the Crusaders) but the effort to keep up in the activities leaves them unable to get many words in edgewise.

After the race, they try to talk in private only for Applejack to lead them to the hay ride, during which Babs expresses admiration at seeing real fruit bats for the first time. After the barn gets wrecked from the bat fiasco, Babs helps with raising the new one and, like the whole family, takes part in the picture. As the relatives start to depart back home, she and Apple Bloom both express excitement about the next family reunion, though both agree that they ought to meet up way before then, and the two bid each other a warm farewell.

In Bloom & Gloom, Babs Seed writes a letter to Apple Bloom stating she received her cutie mark - a pair of scissors, her special talent having been foreshadowed at the end of Friends Forever Issue 13.[7] Sweetie Belle says that Babs "was always fussing with her bangs and tail!" As a result of getting her cutie mark, Scootaloo states that Babs is no longer a member of the Crusaders. Babs also appears on the modified photos from the Apple Family Reunion during Apple Bloom's third nightmare.

In Made in Manehattan, Babs makes a brief cameo walking through Manehattan with Aunt Orange.

In Forever Filly and Marks and Recreation, a photo of Babs appears mounted on the Crusaders' clubhouse wall.

Babs appears and gets mentioned by Apple Bloom in flashbacks of Apple Family Reunion in Harvesting Memories.

In the IDW comics' My Little Pony: Friendship is Magic series, Babs Seed appears on page 12 of Issue #8 fighting against the Nightmare Forces in Ponyville. In the Manehattan Mysteries story arc that spans Issues #21 and #22, Babs helps in clearing Trixie's name when she is falsely accused of jewel theft. She befriends Trixie and eventually solves the mystery of the real thief's identity. In Issue #32, Babs appears on page 10.

In the My Little Pony Micro-Series, Babs appears on cover A of Issue #6.

In the My Little Pony: Friends Forever series, Babs appears on page 2 of Issue #2 booing Apple Bloom's attempt at stand-up comedy and on page 3 of Issue #9 as an attendee of Apple Con 45. In Issue #13, Babs spends the day in Manehattan with Rarity, but the two don't share any common interests. Rarity eventually learns to accept her and Babs' differences, and the two go to see a roller derby match. Babs expresses interest in "cool" haircuts, foreshadowing her later cutie mark.[7] She also appears in Issue #37 having a fun weekend with Sweetie Belle while Rarity works with Sapphire Shores.

In My Little Pony Annual 2013, Babs' human counterpart appears as a student at Canterlot High School. She and her sister Sunflower are antagonists. Though pony Babs is a filly about the same age as Apple Bloom, human Babs appears to be about the same age as Applejack. In My Little Pony: Equestria Girls Holiday Special, human Babs is shown in a MyStable picture.

In My Little Pony/Transformers Issue #4, Babs is summoned to Sweet Apple Acres by Discord to help Applejack drive the Insecticons off the farm. On page 8, she teams up with Big Mac and Apple Bumpkin to take down Chop Shop.

BABS SEED is a tough-talkin' Apple cousin from Manehattan and the newest member of the Cutie Mark Crusaders.

BABS SEED is Apple Bloom's cousin and the founding member of the Crusaders' Manehattan branch.

This big-city pony starts out as a bully, teasing cousin Apple Bloom and her friends for not having their Cutie Marks. But when they realize Babs was bullied in Manehattan for not having her own Cutie Mark, they forgive her and extend the hoof of friendship. Now Babs is the fourth official Cutie Mark Crusader.

Babs Seed is an available character in Gameloft's mobile game. She was added to the iOS version of the game on June 4, 2014 and to the Android version of the game on June 10, 2014. A loading screen[8] of the game's[9] and a Gameloft promotional image[10] each use fanart of her.[11] She also has a story role in "The Cutie Re-Mark: Sombraverse Redux" event, in which Starlight Glimmer recounts the story of an alternate timeline to her. Summertime Babs Seed was added in update 7.6, serving as a helper during the "Bump, Set, Spike!" event, the story of which involves the Cutie Mark Crusader-including Babs and Gabby-teaming up in a volleyball tournament.

Babs Seed:
A cousin of Apple Bloom's, Babs Seed has learned a valuable lesson about friendship and is thinking about setting up a Manehattan branch of the Cutie Mark Crusaders.
Summertime Babs Seed:
Summer in Manehattan is kinda hot, sticky, and gross-so Babs could REALLY use a beach day right about now.

On November 21, 2012, GetGlue released a sticker depicting Babs Seed with Diamond Tiara and Silver Spoon, which was available for a limited time.[12]

A mini-figure toy of Sweetie Babs is packaged in one of four Story Packs with accessories as part of the Friendship is Magic Collection.[16]

When first introduced, Babs is very shy and meek. However, to avoid being bullied, she acts mean and aggressively to Apple Bloom and her friends. After being saved by the Cutie Mark Crusaders, who abort their chance at retaliation, she reverts back to her kind ways and is forgiven. She even protects them from Diamond Tiara and Silver Spoon's bullying. She has a habit of blowing her mane out of her eyes, and previously had a habit of covering her flank with her tail when reminded of her lack of a cutie mark.

In My Little Pony: Friendship is Magic Issue #22, Babs is shown to be smart enough to solve a mystery and figure out the identity of the jewel thief Rough Diamond. She is also particularly friendly and sympathetic toward Trixie, a fellow reformed antagonist.

"Looks like somepony's pumpkin just got squashed!"
— One Bad Apple

"Hey! That's not how you talk to my friends!"
— One Bad Apple

"What am I, gonna miss out on spendin' time with my favorite cousin? Forget about it!"
— Apple Family Reunion

"How are Scootaloo and Sweetie Belle?"
— Apple Family Reunion

"Some ponies made fun of me for for[sic] not having a Cutie Mark. But when I became the fourth Cutie Mark Crusader, I learned that the search for a Cutie Mark was part of learning to become who I am. We all have Cutie Marks now, and I’m always a friend to ponies who are still looking for theirs."
— My Little Pony Facebook post[1] 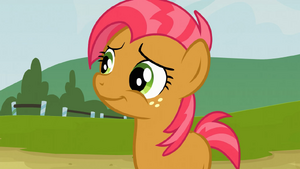